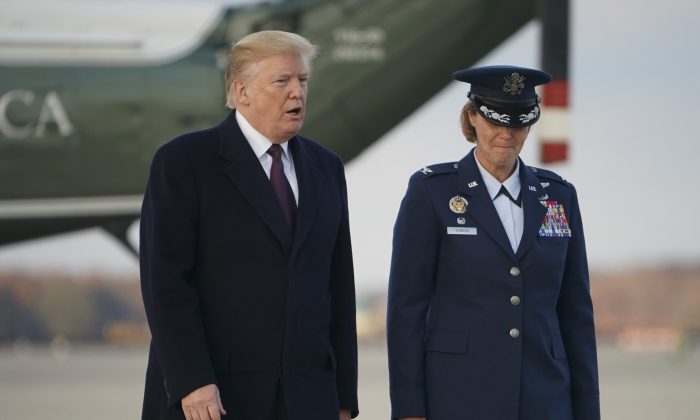 President Donald Trump makes his way to board Air Force One before departing from Andrews Air Force Base in Maryland on Nov. 20, 2018. (MANDEL NGAN/AFP/Getty Images)
Trump Administration

WASHINGTON—Days after Turkey released a recording of the killing of U.S. resident and dissident Saudi journalist Jamal Khashoggi, President Donald Trump said that the United States “intends to remain a steadfast partner of Saudi Arabia to ensure the interests of our country.”

While the investigation into the journalist’s death at a Saudi consulate in Turkey is continuing, the United States “may never know all of the facts surrounding the murder,” he said.

On Oct. 2, Khashoggi walked into a Saudi consulate in Istanbul to retrieve documents for his upcoming wedding to his Turkish fiancée. He never left the consulate and his body hasn’t been found.

Saudi Arabia has admitted that a hit squad of Saudi nationals was involved in the journalist’s death, but the question now is how far up the chain of command the order to kill Khashoggi originated. Trump said both King Salman and his heir apparent, Crown Prince Mohammad bin Salman, have “vigorously” denied any knowledge of the planning and execution of killing, but he didn’t rule out that they were involved.

“Our intelligence agencies continue to assess all information, but it could very well be that the Crown Prince had knowledge of this tragic event,” he said. “Maybe he did and maybe he didn’t.”

He stressed the political importance of the U.S.–Saudi relationship in fighting terrorism, containing the destabilizing influence of Iran in the Middle East, and maintaining low oil prices. After the United States, Saudi Arabia is the largest oil-producing nation in the world.

“They have worked closely with us and have been very responsive to my requests to keeping oil prices at reasonable levels—so important for the world,” Trump said. “As president of the United States, I intend to ensure that, in a very dangerous world, America is pursuing its national interests and vigorously contesting countries that wish to do us harm. Very simply, it is called ‘America First.'”

Khashoggi was at one time an insider in the Saudi government, serving as adviser to a former Saudi ambassador to London, Prince Turki Al-Faisal. He was also a journalist and most recently a columnist for The Washington Post who showed sympathies for the Muslim Brotherhood, an organization the White House has considered adding to its foreign terrorist watch list for its ties to terrorism.

According to Khashoggi, he went into self-imposed exile in Virginia last year, fearing arrest in Saudi Arabia for his critical reporting of the Saudi leadership. But there could be other reasons.

He worked as an agent for the Saudi intelligence service for 20 years, during which he was sent to Sudan to try to talk Osama bin Laden out of going down the road of terrorism, according to former Australian Foreign Minister Alexander Downer, citing intelligence sources.

Bin Laden was the mastermind behind the Sept. 11, 2001, attacks that killed almost 3,000 Americans. He was also responsible for 1998 bombings of the U.S. embassies in Kenya and Tanzania.

“I collapsed crying a while ago, heartbroken for you Abu Abdullah,” he wrote, using Bin Laden’s nickname. “You were beautiful and brave in those beautiful days in Afghanistan, before you surrendered to hatred and passion.”

Downer, who doesn’t see Saudi Arabia’s human-rights record through rose-tinted glasses, said it was Khashoggi’s involvement in the Muslim Brotherhood and a center to promote its ideology that made him a threat to the Saudi leadership.

“[The Muslim Brothershood] have been implacably opposed to many of the more liberal reforms of the Saudi Crown Prince, Mohammed bin Salman (MBS),” Downer wrote in an opinion piece for the Australian Financial Review. “This man wasn’t some Western-oriented liberal brutally murdered because of his passion for freedom. This man was a player.”

This isn’t a justification for murder, he says, but cautions the United States against using his death to shun Saudi Arabia, saying it will have a destabilizing effect in the Middle East, and in the Persian Gulf in particular.

“In this febrile environment, Saudi Arabia is the ally of the West,” he wrote. “Abandoning the relationship with Saudi Arabia would further weaken the interests and influence of the Western powers in the Middle East. And if you think that doesn’t matter, you’re quite wrong.”

After an investigation into Khashoggi’s death, Saudi Arabia’s Foreign Ministry said it had arrested 18 Saudi citizens and fired five top officials it said were involved.

The United States has sanctioned 17 people believed to be connected to the killing. But Trump has eschewed using trade deals with Saudi Arabia as retaliation for the journalist’s death, which he called an “unacceptable and horrible crime.”

“After my heavily negotiated trip to Saudi Arabia last year, the Kingdom agreed to spend and invest $450 billion in the United States. This is a record amount of money. It will create hundreds of thousands of jobs, tremendous economic development, and much additional wealth for the United States,” Trump said. “If we foolishly cancel these contracts, Russia and China would be the enormous beneficiaries—and very happy to acquire all of this newfound business.”

Trump and Secretary of State Mike Pompeo have said on several occasions that the United States will hold anyone accountable who evidence shows was tied to Khashoggi’s death.

Whether the United States finds bin Salman culpable or penalizes him, however, may soon be irrelevant.

Khashoggi’s death has inflamed a schism in the Saudi royal family over whether bin Salman should succeed his father. According to three sources close to the royal court, some members of the family want bin Salman’s uncle, 76-year-old Prince Ahmed bin Abdulaziz, to succeed King Salman.

Because the king has already chosen bin Salman as his successor, they would wait till the 82-year-old king’s death to make any reforms, the sources said.