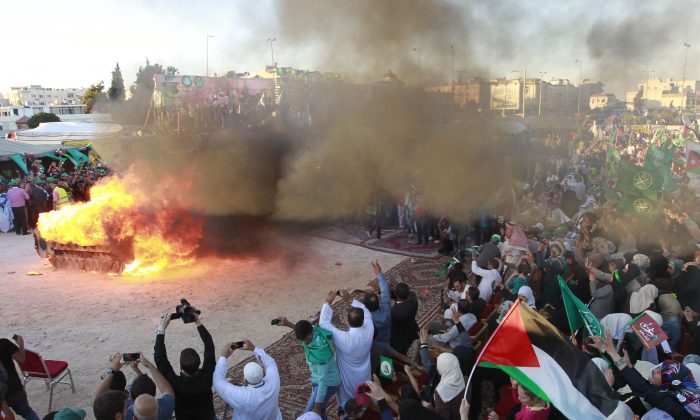 Jordanian supporters of the Muslim Brotherhood set fire to a mock Israeli tank during a protest to celebrate the 'Gaza victory' in the war against Israel, in the capital Amman on Aug. 8, 2014. (KHALIL MAZRAAWI/AFP/Getty Images)
US

The Trump administration may place the Muslim Brotherhood on the foreign terrorist watch list, subjecting it to sanctions, due to the organization’s promotion of Islamic governance and its ties to terrorism.

White House Press Secretary Sean Spicer said in a Feb. 8 briefing that he would not “get ahead of any announcements that we may or may not have coming in the near future,” but added that President Donald Trump “made very clear during the campaign that the first step is understanding, knowing, and proclaiming who the enemy is. And he’s going to do whatever it takes.”

Reuters cited an unnamed Trump insider saying the effort was led by former national security adviser Michael Flynn to have the Muslim Brotherhood designated a terrorist organization by the State Department and Treasury Department. Flynn resigned from his post on Feb. 13 over controversies surrounding calls he had with Russia’s ambassador to the United States during the transition, which he did not fully disclose.

Even without Flynn, however, there are pushes from other parts of the government to declare the Muslim Brotherhood a terrorist organization. Sen. Ted Cruz (R-Texas) and Rep. Mario Diaz-Balart (R-Fla.) reintroduced a bill on Jan. 9 to designate the organization a terrorist group (which Cruz previously introduced in November 2015).

A press release from Cruz’s office states the objectives of the Muslim Brotherhood can be seen in the memorandum On the General Strategic Goal for the Group in North America (published in 1991).

The memorandum states, according to the release: “The process of settlement is a Civilization-Jihad process. … The Ikhwan [Muslim Brotherhood] must understand that their work in America is a kind of grand Jihad in eliminating and destroying the Western civilization from within and ‘sabotaging’ its miserable house by their hands and the hands of the believers.”

Congressman Diaz-Balart said in the release, “This bill would impose tough sanctions on a hateful group that has spread violence and spawned extremist movements throughout the Middle East.”

The Muslim Brotherhood was founded in the Egyptian town of Ismailia in 1928. According to a report from the Investigative Project on Terrorism, it is now active in more than 70 countries and seeks to use democratic processes to establish Sunni Islamic governance ruled by sharia (Islamic law).

The problem with this system, according to Zuhdi Jasser, president of the American Islamic Forum for Democracy, is that it creates governments that often merge the identity of Islam with that of the state. “The government then becomes God, and the people get their rights from the government.”

While Jasser said he opposes the objectives of the Muslim Brotherhood, he also believes that using a blanket designation to label it as a terrorist organization may not have the best results.

“If you’re talking about the Muslim Brotherhood in Egypt, I would support this,” he said, noting that its motto ends with “Jihad is our way. Death for the sake of Allah is our wish.”

“I think it’s a no brainer,” Jasser said.

In many other countries, however, the Muslim Brotherhood has no involvement in terrorism. A sweeping designation, he said, would cause many of the branches to just use different names, while a country-by-country look at each organization’s ideology and operations would do more to show there is a line in activities that shouldn’t be crossed.

According to Jere Van Dyk, an author and journalist who studies terrorism and who was previously taken prisoner by the Taliban—an experience he documented in his 2011 book “Captive”—the Muslim Brotherhood still has widespread support in many parts of the world, and designating it a terrorist organization could have a negative effect.

He said Osama bin Laden’s professor was an important member of the Muslim Brotherhood and was “responsible in many ways for instilling in him this fervent for Islam,” but also noted the organization officially renounced violence a few years ago, and works more on the side of education.

Van Dyk also noted that Ayman al-Zawahiri, the current leader of al-Qaeda, formed his terrorist organization “because the Muslim Brotherhood was, in his eyes and [those of] others in his ilk, a stodgy old establishment that was interested in democracy.”

For many people in the Muslim world, Van Dyk said, the Muslim Brotherhood is treated as more of a fraternal organization, and it is already losing its draw among younger generations.

“It’s not only an ideology, but an ideology that has spawned terrorist attacks,” Cooper said, noting that the worldview of the Muslim Brotherhood and what these views have spawned “needs to be addressed.”

“This is not to indict all religious Muslims, or to say that people who hold their religion dear are to be held out of bounds or put on terror watch,” he said. “But when you look at the progeny of this group and the ideology of the people who founded it, it’s pretty much open and shut. They should be on that list.”

He said designating the Muslim Brotherhood a terrorist organization would undermine its ideology, and he noted, “Maybe it’s now time to expose not only the foot soldiers of terrorism, but also those who feed it.”