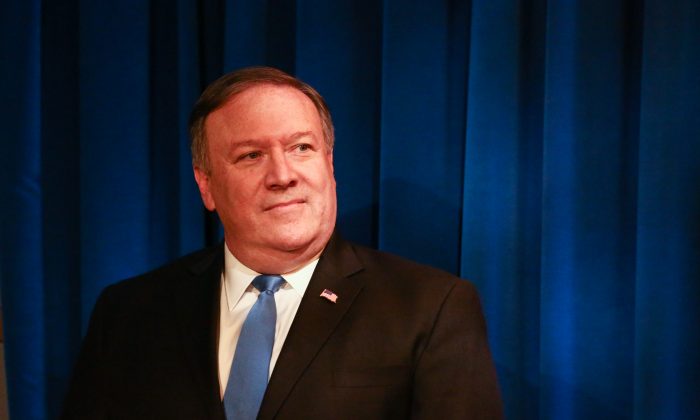 Secretary of State Mike Pompeo told Saudi Arabia’s Prince Mohammed bin Salman Nov. 11 that the United States would hold accountable anyone they found responsible for the murder of journalist Jamal Khashoggi and urged Saudi Arabia to do the same.

Saudi Arabia is a U.S. ally that has worked with the United States on situations like the civil war in Yemen and the Iranian regime’s support for terrorism in the Middle East.

The Saudi government has acknowledged that Khashoggi’s Oct. 2 death inside a Saudi consulate in Turkey was premeditated, and has named several people it says are responsible. The question now is how far up the chain of command responsibility for the killing went.

When asked Nov. 4 if the United States would hold bin Salman responsible if he were found to have a hand in Khashoggi’s murder, Pompeo gave a similar line.

“We’re going to chase the facts wherever they go,” he told CBS. “And we’re going to hold accountable each of those who we find responsible.”

He said they were still investigating, but that the United States had already started sanctioning people they believed had a hand in it. Speaking on Fox News, he said the visas of 16 people connected to the crime had been revoked.

“We will continue to work to maintain that important strategic relationship while holding accountable those responsible for this atrocious death,” he said.

The day before Pompeo’s call with bin Salman, Turkish President Recep Erdogan told reporters that Turkey had given a recording taken during the journalist’s death to the United States, Germany, France, the UK, and Saudi Arabia.

While Canada was not on that list, Canadian Prime Minister Justin Trudeau said Nov. 12 that Turkey had shared the recording with Canadian intelligence officials, the first Western nation to admit receiving the recording.

The State Department referred all questions about the recording to the White House, which did not respond to a request for comment by the time of publication.

White House Press Secretary Sarah Sanders did tell the Dailymail.com that Trump and Erdogan discussed the journalist’s murder as they attended the 100-year anniversary of WWI in France over the weekend.

“I can confirm they sat next to one another and they discussed the ongoing tragic situation with Khashoggi,” Sanders told DailyMail.com

President Erdoğan met with President Trump of the U.S. during a dinner hosted by President Macron of France in honor of heads of states, governments and international organizations as well as their spouses. pic.twitter.com/BkJa8tGYmV

Khashoggi, a U.S. resident and columnist for the Washington Post, went missing after entering the Saudi consulate on Oct. 2 to obtain documents for his upcoming wedding. The Saudi Foreign Ministry admitted on Oct. 19 that Khashoggi had been killed during his visit to the consulate and said that it had arrested 18 Saudi citizens and fired five top officials.

Speaking to reporters Nov. 7, Trump said they were still seeking facts on the case, but that he was working closely with Congress, Turkey, and Saudi Arabia.