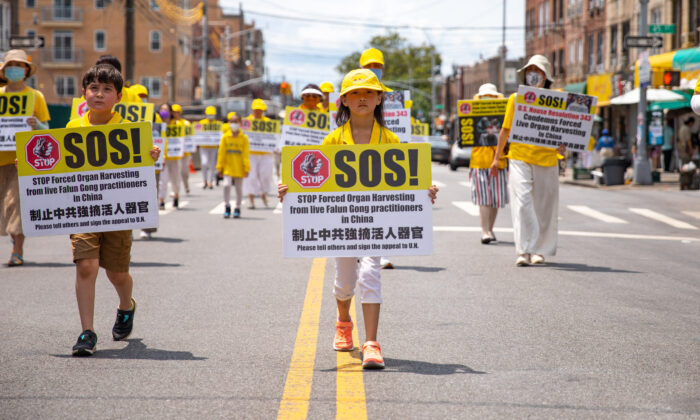 Those carving out organs from living innocents with their scalpels aren’t the only ones complicit in the crime of forced organ harvesting. Silence amounts to complicity, too.

That was one of the arguments raised at a March 23 virtual roundtable held on the sidelines of a U.N. Human Rights Council meeting, where a panel consisting of a UK lawmaker, doctors, lawyers, and activists discussed the decade-long lack of action concerning communist China’s state-sanctioned organ pillaging that has resulted in the deaths of an untold number of faith believers.

Evidence of forced organ harvesting under the Chinese regime’s watch first emerged in 2006. That year, multiple witnesses approached The Epoch Times attesting to the existence of the horrific practice that essentially turned the vast pool of Chinese prisoners of conscience, many of whom were adherents of the persecuted faith Falun Gong, into a living organ bank.

Falun Gong is a spiritual practice consisting of meditative exercises and moral teachings based on the tenets of truthfulness, compassion, and tolerance. The communist regime launched a sweeping persecution campaign against adherents in 1999, and has detained millions of practitioners in prisons, labor camps, and other facilities since then.

Since the first reports of organ harvesting, 16 years have passed, and progress has been slow to stop the illicit act, while awareness has been limited. There have been resolutions from the U.S. Congress and EU parliament condemning the issue, and a few countries have shut out organ tourism. But no law is currently in place to hold the perpetrators accountable, panel participants noted.

Part of this inaction is due to a lack of understanding of the magnitude of the issue, including among those in the transplant community. Dr. Weldon Gilcrease, a gastrointestinal cancer specialist at the University of Utah, estimates that only around 5 to 10 percent in the medical community have heard about forced organ harvesting. Even among those who are aware, many appear passive about the issue, hoping the problem will somehow go away by itself, he told the panel.

When the Chinese regime said it would stop using organs from death row inmates and set up a voluntary organ donation system in 2015, “the hope was that we can believe them and sort of collaborate and cooperate with them,” Gilcrease said, referring to widespread thinking within the medical community.

It was the same stance the world took when China joined the World Health Organization, he said.

“Our hope was to convince or to affect the Chinese Communist Party and China with our morals and our values and our medical ethics. But the reverse has happened,” he said. According to Gilcrease’s count, nine top medical scientists in the United States have left their respective institutions due to undisclosed ties with the Chinese Communist Party.

In 2020, an independent people’s tribunal found no evidence that the regime’s killing for organs had stopped.

The failure of governments to investigate, the tribunal said, “has allowed many people to die horribly and unnecessarily.”

With regard to the international health community, the Chinese Communist Party has been “playing these people along, saying, ‘We’ll make the change you want, we have made the change you want, we will change the laws, we have changed the laws,’ and so on,” said David Matas, a Canadian investigative lawyer who has been following the issue since 2006.

“But there’s no investigation,” Matas said. “There’s no transparency, there’s no research, it’s just a kind of bamboozlement, and of course these people don’t want to admit they’ve been tricked.”

Gilcrease and others on the panel observed that the Western medical profession has hardly done a good job policing itself. They referred to a report that between 2000 and 2017, more than 99 percent of 445 research papers published in respected English medical journals that used Chinese organ transplant data failed to show donor consent. This covered 85,000 transplants.

The Chinese regime, the panelists said, has also been using its political and economic influence to coerce many countries to remain silent on the issue.

At one U.N. Human Rights Council event a decade ago, Spanish human rights lawyer Carlos Iglesias was set to make a three-minute speech condemning the former Chinese leader Jiang Zemin for ordering the persecution of Falun Gong in 1999.

“Before the agenda could be discussed, the representative of the Chinese Communist Party went chair by chair talking to each individual country so that they would say ‘no action’ right then and there,” Iglesias said, referring to Beijing’s efforts to shut down scrutiny by the body over its rights abuses.

In 2007, a year after allegations of forced organ harvesting first came out, a dozen concerned French surgeons signed a petition that they planned to hand to the country’s top leaders. That was one year before Beijing was due to host the Summer Olympics.

But one of the doctors involved, Francis Navarro, a surgeon and professor at the Centre Hospitalier Universitaire de Montpellier, was instead told to “first calm down and finally to be as discreet as possible,” he said at a 2013 conference aimed at raising awareness about the issue. “Because with China, this is not the time to put this issue on the table,” said the request from the French government, according to the doctor.

In France, medical ethics groups including Doctors Against Forced Organ Harvesting (DAFOH) have tried at least three times to pass legislative measures combating organ transplant tourism. But each time, the government turned it down, arguing that there are not enough French people going abroad for organs, Dr. Harold King, director for DAFOH’s French branch, told The Epoch Times.

That was despite DAFOH’s discovery in 2014 of 300 French people disappearing from the country’s organ transplant waitlists each year without explanation, he said, noting it was an indicator that they might have gone instead to China to receive these organs.

It’s now more than two decades since the Chinese regime began its eradication campaign targeting Falun Gong, the intensity of which, researchers say, has grown in parallel with China’s organ transplant industry.

The Spain-based lawyer Iglesias recalled how, between 2014 and 2017, the University of Barcelona was giving training to Chinese medical doctors on organ transplantation despite having already been warned about organ theft.

“It is a commercial agreement logically paid and possibly with CCP money,” Iglesias, who is also the European director of the Human Rights Law Foundation, told The Epoch Times.

“There are these links, these liaisons between the high-ranking medical officials and the Chinese Communist Party,” he said earlier at the roundtable.

“They have to stay away from this evil because they are likely being accomplices to murder.