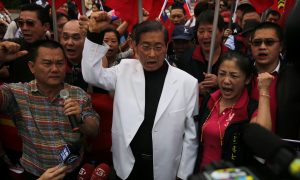 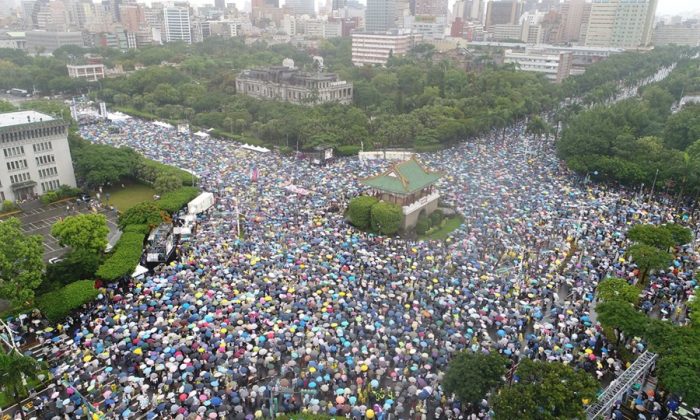 Tens of Thousands Taiwaneses joined against pro-Beijing Taiwanese media rally on Ketagalan Boulevard in front of the presidential office building in Taipei, Taiwan on June 23, 2019. The subject of the rally is rejecting red (CCP infiltrated) media and safeguarding the nation's democracy. (The Epoch Times)
Social Issues

Thousands of Taiwanese Rally Against Beijing Infiltration Through Media

Tens of thousands of Taiwanese citizens braved heavy rain for more than four hours on June 23 to attend a Taipei rally calling for a ban on pro-Beijing media outlets that push the Chinese regime’s agenda.

Beijing considers the self-ruled island part of its territory, despite Taiwan having its own democratically elected government, military force, and currency. The Chinese regime has recruited Taiwanese military personnel to conduct espionage on its behalf, and has hired local gang members to intimidate China’s critics.

In recent years, the Chinese regime has infiltrated local media, political parties, and other facets of Taiwan society in an effort to persuade Taiwanese citizens to accept a future in which the island is “unified” with the mainland. But the large turnout this weekend was a rare public repudiation of Beijing’s tactics.

Politicians, TV stars, a movie director, and teachers were among those who delivered speeches in support of democracy and freedom in Taiwan. They condemned Chung T’ien Television, China Times, and other pro-Beijing media outlets that have downplayed recent coverage of Hong Kong mass protests against a controversial extradition bill that would allow mainland China to seek extradition of any individual from Hong Kong. Locals refer to them as “red media,” after the symbolic color of the Chinese Communist Party.

Taiwan President Tsai Ing-wen voiced her support for the rally during the opening ceremony of an international women’s association meeting early on June 23.

“I believe the rally can awaken Taiwan society,” she said.

Rally in the Rain

Holger Chen, a YouTube celebrity, teamed up with Huang Kuo-chang, a lawmaker from the Taiwan New Power Party, to organize the rally.

Despite heavy rain, tens of thousands arrived at Ketagalan Boulevard in front of the presidential office building with umbrellas and raincoats before the rally began at 2 p.m. Organizers didn’t provide a turnout estimate.

China Times didn’t place the news on its front page. Other coverage of the continuing protests have been slanted in favor of the Hong Kong government, which is currently led by an official handpicked by Beijing.

Since China Times was acquired by Taiwan-based food company Want Want Holdings in 2008, the publication has increasingly taken a pro-Beijing bias in its coverage.

Other media outlets owned by Want Want, such as Chung T’ien Television, China Television, Want Daily, and Commercial Times, are also pro-Beijing. China is Want Want’s biggest market, where it has more than 100 manufacturing plants.

“If the Chinese regime launches 2,000 missiles targeted at Taiwan, the red media won’t report it but fool people with fake news,” Lee told the crowd. “The red media camouflages itself under the guise of free speech, but it works for the Chinese regime, and puts Taiwan’s administrative power and sovereignty in danger.”

Wang Ding-yu, a lawmaker from the Democratic Progressive Party (DPP), said, “The red media can’t be called media, but the Chinese regime’s lobbying groups in Taiwan.”

Luo Wen-jia, secretary of DPP, called for the island to establish a foreign agent registration law, similar to the United States.

“You can’t find any news about the Tiananmen Square Massacre on the website of Chung T’ien Television,” a young mother told reporters from the Taiwan bureau of The Epoch Times, noting that its coverage resembled that of Chinese state-run media. “If we don’t stand up now, [Taiwan] will become the current Hong Kong in 10 or 20 years.”

Luo pointed out that the large number of Hongkongers protesting the extradition bill, and its perceived indication that Beijing was further eroding the city’s autonomy, has encouraged the Taiwanese to also stand up against Beijing.

“Look at the scene here. There are so many people standing in the heavy rain to protest,” Huang said.

He urged the crowd to contact their local legislators and ask them to support future bills that ban red media and protect free speech.

“Let’s move the fake and false news away from Taiwan society through enhanced law enforcement, more solid legal foundation, and cooperation with international society,” she said on June 23.