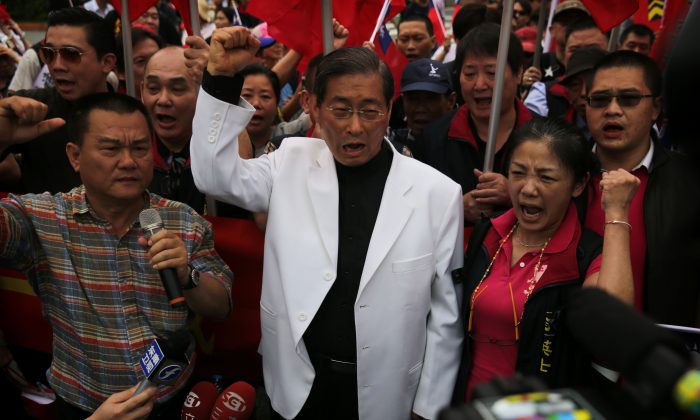 The recent beating of four students in Taiwan has awakened the island nation to a long-running scandal: Taiwanese gangs are the cat’s paw of the Chinese regime, working for unification with the mainland while using violence to subdue those the regime opposes.

The beatings occurred following a demonstration by hundreds of students on Sept. 24 protesting a concert they considered to be Chinese regime propaganda.

The “Sing! China: Shanghai-Taipei Music Festival” took place at the National Taiwan University in Taipei on Sept. 24. It was co-sponsored by the municipal governments of Taipei and Shanghai, together with the Chinese reality television show “Sing! China.”

Students protesting the concert were initially denied admission, but managed to make their way into the venue around 4:30 p.m. About 10 minutes later, facing the protests of the students, concert organizers were forced to cancel the event.

According to university’s report afterward, university officials had ordered concert organizers to shut down the event at 3:30 p.m citing serious safety concerns, an order that was not immediately followed by concert organizers. Even before the event, criticisms had mounted that the university had improperly allowed the venue to be used for the concert.

As the crowds began to disperse, a small number of pro-China groups descended upon the venue and were soon engaged in heated confrontations and physical altercations with the students. Videos of the students being injured were uploaded to social media and widely viewed by the Taiwanese public.

Under heavy public pressure, the Taipei police launched a criminal investigation and identified nine members of two groups that allegedly beat the students—the Chinese Unity Promotion Party and the Patriot Alliance Association. Both organizations are well-known for openly advocating Chinese regime rule for Taiwan, a fringe position that has little support among the Taiwanese public.

One of the nine accused members is the son of Chang An-lo, an infamous gang boss who founded in 2005 the Taiwanese branch of the Chinese Unity Promotion Party, which originated in mainland China.

Known as the “White Wolf,” Chang commands Bamboo Union, a large criminal triad in Taiwan that has been listed as one of the “most dangerous gangs in the world” by the journal Foreign Policy. The Chinese Unity Promotion Party, which allegedly has 20,000 members, is often seen as a recruitment front for Chang’s gang.

Upon returning to Taiwan in 2013 after spending 17 years in China as a fugitive, Chang was arrested, but prosecutors dropped the charges, saying the term on them had expired.

Since his return, Chang has described himself as a career politician. But his version of politics involves rough tactics. For instance, in April 2014 Chang led a group of hundreds to confront students who were protesting a trade pact with China. When one of the students fell among Chang’s group, he was beaten.

Chang’s extensive ties with and frequent travels to the other side of the strait, together with his high-profile activism in Taiwan advocating for the country’s capitulation to China, have added to the growing public anger over his role as an agent of influence and a mobster working for the Chinese regime.

Chang is also deeply connected to the Patriot Alliance Association, the other group involved in the Sept. 24 assault case. This group has been notorious in Taiwan for more than a decade for harassing and physically attacking Falun Gong practitioners who regularly demonstrate peacefully outside Taipei 101 plaza. Several of the association’s members have been convicted of assaulting the practitioners, bringing to Taiwan the persecution of this group being carried out in mainland China.

Zhou Shuguang, a Chinese dissident writer who now lives in exile in Taiwan, shared on his blog photos of a pamphlet from a June 2017 pro-unification conference in Taipei at which Chang was a featured speaker. The pamphlet prominently prints a foreword written by Chang, together with a congratulatory letter from Zhang Zhijun, the head of the Taiwan Affairs Office, the very agency of the Chinese regime directly responsible for dealing with Taiwan.

This letter serves as proof that the Chinese regime is directly supporting pro-China criminal gangs in Taiwan and exploiting them to influence politics there, Zhou wrote.

According to a report by Taiwan’s Liberty Times, two of Taiwan’s largest criminal triads, the Bamboo Union and the Four Seas Gang, are both under the influence or even direct control of China’s Ministry of State Security (MSS), the principal intelligence agency of the Chinese regime comparable to the CIA in the United States.

An office titled the Fujian-Xiamen Bureau of Taiwan Affairs Office has been set up to control the gangs in Taiwan, says the report. The bureau nominally belongs to the Chinese regime’s Taiwan Affairs Office, but is actually a front organization under the command of the MSS, with the sole purpose of recruiting Taiwanese gangs and gang members to work for the benefit of the Chinese regime.

Taiwanese officials have yet to confirm the veracity of the report by Liberty Times. However, it is commonly observed that the triad gangs in Taiwan, many of which trace their roots back to mainland China, are remarkably uniform in their tendency to be pro-China and pro-unification.

“The government will not tolerate such manipulation and the infiltration of Taiwan’s democratic society from abroad,” said Yeh Jiunn-rong, Taiwan’s minister of the interior, in response to the furor over Taiwan’s allegedly treacherous gangs, on Sept. 29.