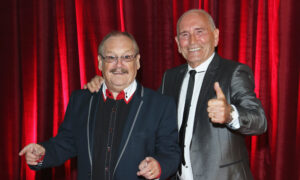 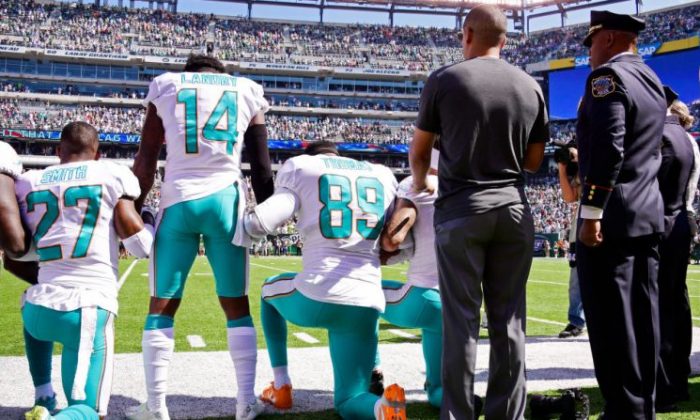 Maurice Smith No. 27 and Julius Thomas No. 89 kneel with Jarvis Landry No. 14 of the Miami Dolphins during the national anthem prior to an NFL game against the New York Jets at MetLife Stadium in East Rutherford, N.J., on Sept. 24, 2017. (Steven Ryan/Getty Images)
Entertainment News

The entire team took a knee before the anthem and then stood up and linked arms. Cowboys owner Jerry Jones and his family partook in the demonstration. Many fans booed.

Some Dallas Cowboys players have a “plan” to “protest” the U.S. national anthem during “Monday Night Football,” according to the Star-Telegram newspaper in a report on Monday afternoon.

One player said, “We have to do something” during the national anthem.

Added another to the paper: “Something will be done.”

But according to a report from CBS Dallas, sources said the team has a plan for “unity” during the anthem. “Our statement will be a statement of unity,” according to an unknown “team leader.”

No Cowboys player has protested during anthem.

CBS Dallas reporter Mike Fisher wrote: “I’m told the players have discussed the locking of arms during the Anthem.”

Dallas coach Jason Garrett told the Dallas News over the weekend that he doesn’t think there will be protests—following comments that President Donald Trump made about players not standing during the anthem.

“#StandForOurAnthem,” the president tweeted Monday. “Many people booed the players who knelt yesterday (which was a small percentage of total). These are fans who demand respect for our Flag!” he added.

Garrett said he has no comment on what Trump said, noting: “I just don’t think it’s in anyone’s best interest for me to comment on that.”

The Dallas Cowboys are slated to play the Arizona Cardinals in Glendale, Ariz. It’s unclear whether any Cardinals players will protest.

Cardinals head coach Bruce Arians over the weekend said that it’s up to the players to decide on that.

“That is an individual right of an American,” Arians said, Patch.com reported. “I’ve been in locker rooms for 25 years, and some of the most reputable men I’ve ever met wear that uniform.”

“To even overcome the things in their life to get to the NFL is amazing. What they’ve done in the last month for hurricane relief victims speaks volumes of what we’re all about in the NFL,” the coach added.

In the past, however, Jones has gone on record saying that he doesn’t think the national anthem is the best time to protest.

“That’s not the place to do anything other than honor the flag and everybody that’s given up a little for it,” he said.

During Sunday’s games, around 200 NFL players knelt, sat, raised a fist, or engaged in some other form of protest during the anthem, according to Fox Sports.