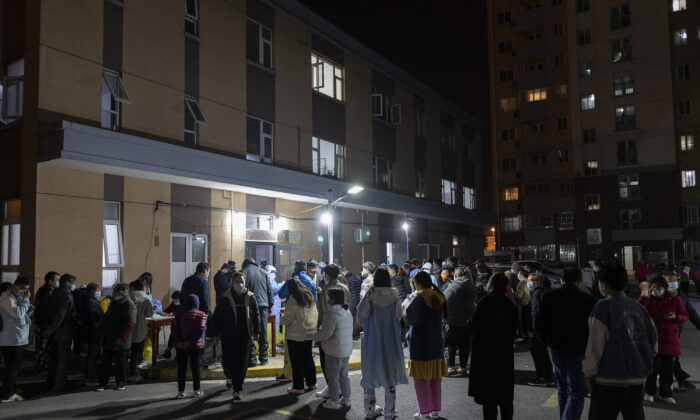 People line up for coronavirus tests as part of mass COVID-19 testing in a residential community in Shanghai, on March 10, 2022. China is tackling a COVID-19 spike with selective lockdowns and other measures that are part of its draconian "zero tolerance" strategy. (AP Photo)
INSIDE CHINA

Shanghai Residents Bang on Pots and Woks to Protest Lockdown

It has been a month since Shanghai was put under lockdown to prevent the spread of COVID-19 and people’s frustrations are boiling over. More than 20 million residents of this large city have no food, no supplies, and no freedom. Feeling hopeless, many Shanghai residents began to protest the “Zero-Covid Policy” by banging on pots and pans on their balconies and in open windows. Some community residents broke through the blockade and took to the streets asking for daily necessities to be provided.

On the evening of April 28, many communities protested against the Zero-Covid Policy by banging on pots and woks. This was an action that Shanghai citizens organized through the internet to “smash pots and ask for supplies” and called it a “concert” to get around censors. Some citizens said, “Tonight there is an uprising in Shanghai,” to show “Shanghai people’s perseverance.”

Now that the lockdown of Shanghai has continued for a month, the dissatisfaction of the Shanghai people has reached its peak. On the evening of April 28, the videos recorded by Shanghai residents circulated on the internet showed that many communities in Shanghai are making noise to draw attention to their need for daily necessities. People shouting “We want supplies” and “Give me back my freedom” pierced the night while they banged pots and pans on their balconies. Some communities even hung the words “We want supplies” on the outer wall of the buildings to express their dissatisfaction. With the sound of banging in the background, some residents walked out of their homes and gathered in the street. On the videos, residents can be heard playing the Communist Party’s anthem “The International” and protesting against the Communist Party by singing the lyrics “Rise up, people who don’t want to be slaves…”

Ms. Gao, a resident of Shanghai’s Pudong District, told The Epoch Times that on the evening of April 28, hundreds of thousands of people from various communities in Shanghai participated in the “Smashing pots for supplies concert.”

Ms. Gao said that Shanghai has done a very good job this time. Be it locals or foreigners, rich or not, all are united. This time, there were hundreds of thousands of people protesting together, and the gathering was huge.

Ms. Zhang, a resident who participated in the “concert” told The Epoch Times, “Many local community residents now take out pots and pans and beat them on the balcony every night because they lack supplies.”

Mr. Feng told The Epoch Times that one can see the Shanghai people’s perseverance, strong will, and unyielding courage—not bowing to evil, and courageously persevering in resistance. In the video, you see the people sent by the authorities shouting from loudspeakers “don’t believe rumors, don’t spread rumors,” but the residents simply ignore them.

The dozens of posters sent to reporters by Shanghai citizen Ms. Zhang showed that many communities participated in the “concert” that day.

Residents of the Second Jiangqiao Village put up posters that read: “Return the supplies we should have.” The background is a big fist, representing people’s anger.

Another poster was designed by residents of Lane 161 of Jintai Road, Pudong New Area, in which people are called on to pick up iron woks, shovels, and rolling pins to participate in the “Smashing Wok Music Festival” starting at 7 p.m.

Almost all related videos and pictures posted on Weibo have been deleted.

Police Did Not Act During Mass Protests

On April 27, after being locked down for more than a month, the residents of Jiangqiao Town, Jiading District, in Shanghai could no longer bear it, and a large-scale group protest broke out. The fuse was lit when residents discovered that the neighborhood committee was hiding vegetables. But the fundamental problem is that the daily supply of food and necessities for local residents is seriously insufficient, and the stealing of supplies by the neighborhood committee just added to the residents’ anger.

A video shows a large number of residents gathered in front of the Jiaxi Community in Jiangqiao Town, Jiading District. The photographer said that several boxes of vegetables hidden by the neighborhood committee were uncovered, chicken and meat had been transported away, only some rotten vegetables were left.

Residents asked the neighborhood committee where the supplies came from, but no one answered. More and more residents gathered in front of the neighborhood committee to protest, chanting slogans, “Need supplies! Send supplies!” There were a large number of policemen at the protest site, and police cars, but no action was taken as the protest continued into the night.

In this regard, Zhuge Mingyang, an independent writer, said that as a state machine, the police “stand by and watch,” it’s definitely not personal behavior, but following a directive from their supervisors. “When a mass incident-mass disturbance occurs, the police must be present, but they must not interfere arbitrarily. It is unknown where this order came from.”

He said: “This reminds me of the June 4 event in 1989. In order to prevent students from marching in the streets, the government asked the police to stop them, but they were not allowed to hit the students. At that time, everyone sympathized with and supported the students from top to bottom. No one wants to do bad things. So a police officer asked their superior: ‘What if the students forcefully charge?’ The superior said, ‘Can’t you just run away?’ This is what I saw with my own eyes at the time.”

Donghua (pseudonym), a resident of Jiangqiao Town, said, “We are residents of Jiangqiao Town, Jiading District. It is understood that when the government distributed supplies, there should be 2 bags of braised duck with brown sauce per household, but received only one bag. When the neighborhood committee distributed the supplies, I pulled the duck out of the box, and was seen by the residents recording a video from upstairs, the members of the neighborhood committee were stealing the cooked ducks from the box.”

She said that one bag of Laotan sauerkraut instant noodles and a few Daliyuan buns were all she was given in two weeks of lockdown. “I called and asked the Jiangqiao government and was told that there were no supplies, only government group purchases were available. Why are there not enough supplies for people but all kinds of foods is provided for the group purchases?”

On April 23, the Shanghai authorities imposed “hard isolation” on the lockdown area and buildings, blocking roads and gates with barbed wire and hard steel plates. Residents rushed out and tore down the barbed wire.

Zheng Hao (pseudonym), a Pudong resident who has been under lockdown for more than 45 days, told The Epoch Times that barbed wire has been installed in a large area of Pudong and a “hard isolation” has been imposed, saying that it is for the purpose of dividing and separating Pudong piece by piece.”

Zheng Hao said that the barbed wire in his community was pushed down. “Many people rose up to resist. After they (the government) installed it, the residents pushed it down.”