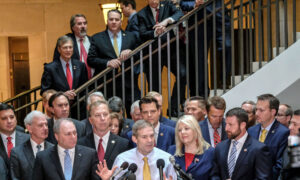 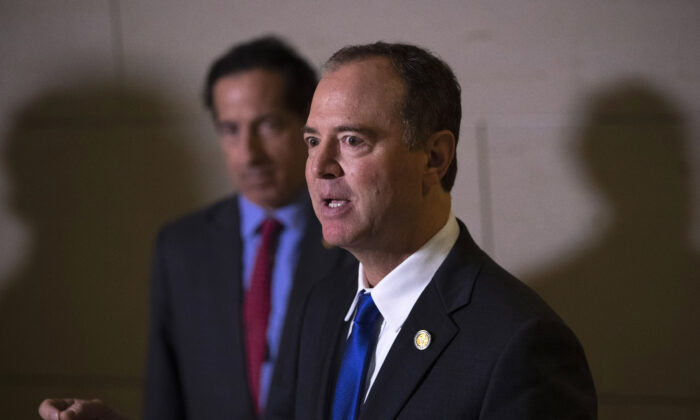 Schiff Told Gaetz to ‘Absent Yourself’ During Heated Committee Meeting That Rep. Crashed

Schiff has been leading the impeachment despite the process traditionally being overseen by the House Judiciary Committee. The House Foreign Affairs Committee and the House Oversight Committee have also been involved with the inquiry.

Gaetz entered the room during the deposition of Fiona Hill, a former National Security Council, on Oct. 14, prompting Schiff to interject and say: “Excuse me, could we suspend?”

“Do we have any members here that are not members of the three committees authorized to be present? Mr. Gaetz, you’re not permitted to be in the room,” Schiff claimed.

“I thought the Judiciary Committee had jurisdiction over impeachment,” Gaetz asserted.

Schiff then ordered Gaetz to leave. “Mr. Gaetz, you’re not permitted to be in the room. Please leave,” he said.

Rep. Jim Jordan (R-Ohio)—a member of the House Oversight Committee, who was moved onto the House Intelligence Committee on Nov. 8—then chimed in, saying: “Mr. Chairman, really?”

“You’re going to include Members of Congress on committees that have roles of impeachment—” Gaetz said, before Schiff interrupted him, saying: “Mr. Gaetz, take your statement to the press. They do you no good here. So, please, absent yourself.”

“You’re going to have someone remove me from the hearing?” Gaetz wondered.

“Mr. Gaetz is going to stay and listen to the testimony,” Jordan said.

Gaetz said he had a right to be in the room, challenging Schiff to cite a rule as to why he did not.

“You’re not a member of this committee. This is conducted in closed session. You’re not permitted to be here,” Schiff said.

When Gaetz said he was on the Judiciary Committee, Schiff told him: “Please absent yourself from the committee. It’s the ruling of the chair you’re not permitted to be here. Please leave the committee.”

Jordan said it wouldn’t hurt to have another member of Congress present, but Schiff insisted that Gaetz leave, prompting Gaetz to once again ask Schiff to name a rule.

“I am citing the House rules and the deposition rules. You are not permitted to be here,” Schiff said.

“Mr. Gaetz, you are simply delaying the procedures in violation of the rules. Please absent yourself,” Schiff said.

Schiff told him to leave again and said, “this dilatory tactic will come out of the minority’s time for questioning.”