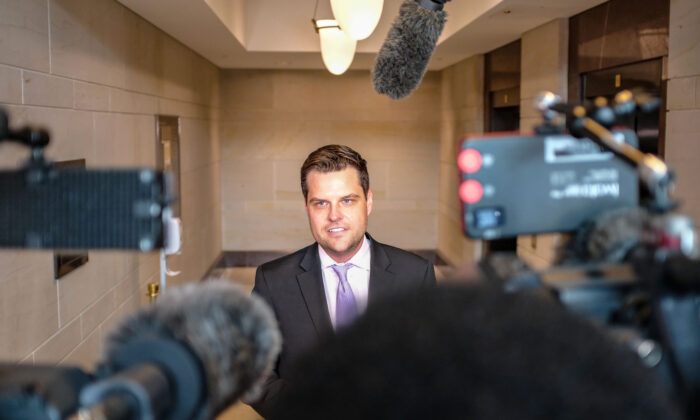 Rep. Matt Gaetz (R-Fla.), speaks to members of the media on Capitol Hill in Washington on Oct. 14, 2019. (Photo by Alex Wroblewski/Getty Images)
Politics

Rep. Matt Gaetz (R-Fla.) was thrown out of a closed-door impeachment inquiry hearing on Oct. 14.

While Gaetz is a member of the House Judiciary Committee, which historically has handled impeachment inquiries, that committee hasn’t been directly involved in the inquiry against President Donald Trump, which is being handled by the House Intelligence, Foreign Affairs, and Oversight committees.

“Judiciary Committee Chairman Jerry Nadler claimed to have begun the impeachment inquiry weeks ago,” Gaetz wrote on Twitter, after leaving the room where the hearing was taking place on Oct. 14.

“Now, his own Judiciary members aren’t even allowed to participate in it. And yes – my constituents want me actively involved in stopping the #KangarooCourtCoup run by Shifty Schiff,” he added, referring to House Intelligence Chairman Adam Schiff (D-Calif.).

“Chairman Schiff and the radical Democrats are now active participants in the coup. To exclude Members of Congress from hearings confirms the American people’s suspicions: this is not a legitimate ‘impeachment inquiry’ — it is a charade,” he wrote.

Chairman Schiff and the radical Democrats are now active participants in the coup. To exclude Members of Congress from hearings confirms the American people’s suspicions: this is not a legitimate “impeachment inquiry” — it is a charade.

“Chairman Schiff and Speaker Pelosi are equally complicit in hiding and obfuscating the truth. Blocking Members of Congress from attending ‘impeachment’ hearings is not only unfair, it runs counter to our Democracy.”

Chairman Schiff and Speaker Pelosi are equally complicit in hiding and obfuscating the truth. Blocking Members of Congress from attending “impeachment” hearings is not only unfair, it runs counter to our Democracy.

Gaetz wrote that “the perpetrators of this impeachment hoax must be held accountable—both by the Congress, and by the American people.”

Trump and a number of Republicans have been critical of the inquiry, noting the House never voted to start the probe.

According to CNN reporter Manu Raju, Gaetz exited the hearing, saying he was kicked out by House Democrats because he’s not a member of the three committees involved in the hearing. The House parliamentarian informed Gaetz that he couldn’t be there.

The three committees conducting the inquiry were holding a closed-door deposition of Fiona Hill, former special assistant to Trump and National Security Council senior director for European and Russian Affairs.

Hill declined to comment as she arrived on Capitol Hill, but her attorney said she had received a congressional subpoena and would “comply and answer questions” from lawmakers. She resigned from the White House National Security Council over the summer.

She is the first White House official to appear as part of the House impeachment inquiry. Her appearance comes as the White House has vowed to halt any and all cooperation with what it termed an “illegitimate” impeachment probe. The White House didn’t immediately respond to questions about whether they had sought to limit Hill’s testimony.

Republicans called on Schiff to release transcripts of the depositions to the public. Schiff said on Oct. 13 that having witnesses appear behind closed doors would prevent them from knowing what other witnesses said.

“We want to make sure that we meet the needs of the investigation and not give the president or his legal minions the opportunity to tailor their testimony and, in some cases, fabricate testimony to suit their interests,” Schiff said on CBS’s “Face the Nation.”

Rep. Jim Jordan (R-Ohio), the top Republican on the House Oversight Committee, said he learned on the morning of Oct. 14 that Schiff had subpoenaed Hill.

“She was going to come, she’d agreed to come, she was going to come voluntarily but he’s going to subpoena her, I believe, so he could ask certain questions and again keep those secret, except for the certain things he wants to leak,” Jordan said. “The tragedy here and the crime here is that the American people don’t get to see what’s going on in these sessions.”