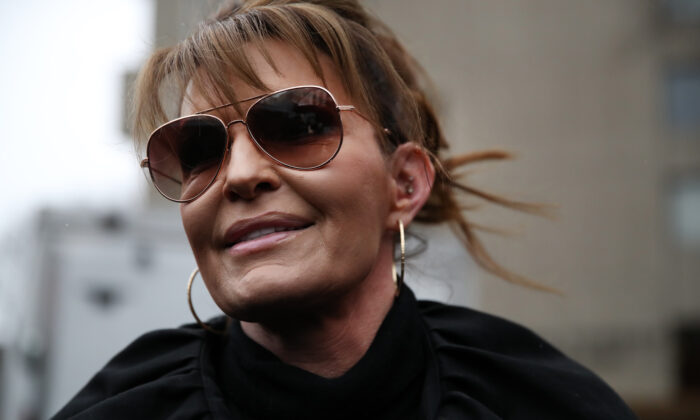 Former Alaska Gov. Sarah Palin has moved for a new trial and is asking for the disqualification of a federal judge who preempted the jury in her defamation case against The New York Times.

In a court filing, Palin through her lawyers wants U.S. District Judge Jed Rakoff, a Clinton nominee, disqualified and any rulings and orders he issued since Aug. 28, 2020, vacated.

While the jury was deliberating, Rakoff on Feb. 14 ruled that Palin had failed to prove that NY Times employees acted with malice—the standard under Supreme Court precedent—when they inserted language into a 2017 editorial that incorrectly linked the onetime vice presidential candidate to a 2011 mass shooting in Tucson, Arizona, where six people died and then-Rep. Gabby Giffords (D-Ariz.) was seriously wounded.

The paper later removed the claim of incitement and said “no connection to the shooting was ever established” but didn’t apologize to Palin. James Bennet, the editor who introduced the alleged link, admitted the claim didn’t belong in the piece but said removing it didn’t invalidate the argument presented in it.

While the jury later decided in favor of the NY Times, several jurors acknowledged afterward that they were aware of Rakoff’s ruling because they received news alerts on their phones.

Palin’s lawyers are now asking for approval to interview jurors concerning their receipt of the push notifications, in addition to requesting Rakoff’s disqualification and a new trial.

The filing isn’t yet supported by a memorandum of law. Palin’s lawyers have until March 15 to file one; the NY Times will then file a response.

Palin told The Epoch Times in February that the judge’s decision was “very strange,” describing the move as “taking the verdict from the jury.”

Rakoff previously tossed the case, but was overruled by an appeals court, leading to the trial.

The judge, in an opinion published after Palin’s new filing, defended his latest decision.

“After reviewing all evidence adduced at trial in the light most favorable to Palin and drawing all reasonable inferences in her favor, the Court concluded that no reasonable jury could find by clear and convincing evidence that Bennet or The New York Times Co. knew at the time of publication that the allegedly libelous statements were false or that Bennet thought that the challenged statements were probably false but recklessly proceeded to publish them anyway,” he said.

The judge said he waited until closing arguments finished before ruling in favor of the newspaper’s motion to dismiss the case, and could have simply entered a judgment and dismissed the jury. But he allowed jurors to reveal their own verdict because an appeals court weighing whether to overturn his decision, he said, would benefit from seeing it.

The verdict “further validated the Court’s legal conclusion,” the judge said. The fact that at least some jurors became aware of his ruling before they finalized their verdict doesn’t nullify the verdict; even if it influenced jurors, as “the operative final judgment would still have been the same: dismissal of Palin’s claim as a matter of law,” he concluded.

Dave Paone contributed to this report.