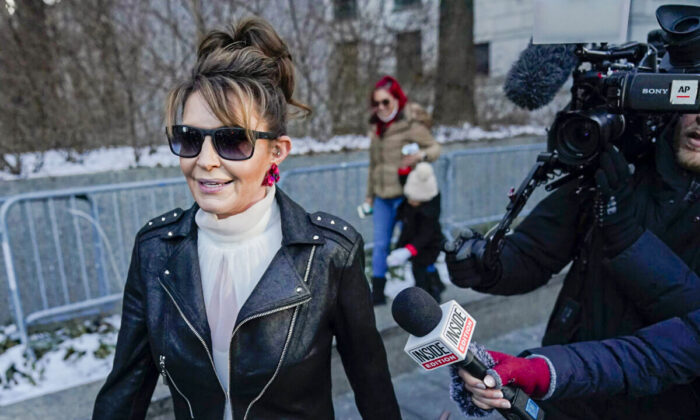 NEW YORK—After roughly 15 hours of deliberation over three days, the jury in the Sarah Palin v. The New York Times trial delivered a verdict of “not liable” on Feb. 15, giving the newspaper a victory.

Since the verdict in the defamation trial was not in Palin’s favor, there was no monetary figure attached for damages.

Judge Jed Rakoff thanked the jury for paying careful attention and for being prompt. He told them that members of the press would likely want to speak to them. In his last instructions to the jury, Rakoff said, “It’s up to you whether or not you want to speak to folks from the media,” but added, “My recommendation to you is not to talk to them.”

Rakoff also told them that lawyers from both sides of the case may want to speak to them as well, but cannot without his permission. If one does, he should be notified.

The judge told the jury that both he and they have concluded the defendants are not liable, but for different reasons.

Rakoff was referring to his ruling from Monday where he felt Palin and her pair of lawyers did not sufficiently prove “actual malice,” one of the four elements they needed to satisfy.

The ruling would have overruled a verdict in Palin’s favor.

Before the final adjournment, defense lawyer David Axelrod requested from Rakoff that The New York Times be permitted to speak to members of the jury.

“The Times’ philosophy is more information for the world is a better thing,” Axelrod said.

Rakoff denied the request, saying, “to my mind, it’s an imposition to the jurors and the jury system,” but added he may grant a specific question.

Katie Sullivan, a Brooklyn-based attorney, told The Epoch Times that Palin could appeal the case with the arguments that the standard for actual malice is too high and the evidentiary standard of clear and convincing evidence is also too high.

“She may use others, but that’s the heart of it,” Sullivan said.

If Palin is successful in her appeal, the case could then go to the Supreme Court, where a ruling could change the law on what the media is allowed to say regarding public figures.

Upon entering a courthouse elevator for the final time, Palin and Sullivan spoke of the possible appeal. “I don’t know what I think of lawyers right now,” Palin said as the doors closed.