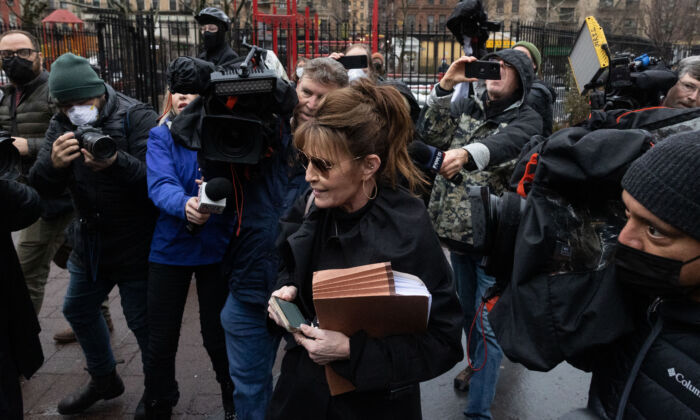 Members of the press surround former Alaska governor Sarah Palin as she leaves the federal court in New York, on February 3, 2022. (Yuki Iwamura/ AFP)
US News

NEW YORK—Elizabeth Williamson, the writer at The New York Times who penned the first draft of the editorial at the heart of Gov. Sarah Palin’s defamation trial against the newspaper, finished her testimony in federal court on Feb. 4.

Combined with her testimony from the previous day, Williamson spent a total of five hours on the witness stand.

Still under direct examination by Palin’s attorney Shane Vogt, Williamson repeatedly stated the purpose of the editorial was to call out “overheated rhetoric” by both Republicans and Democrats that was prevalent in the country at the time of two mass shootings.

In addition to several other casualties, victims in the shootings included Congresswoman Gabrielle Giffords (D) in 2011 and Congressman Steve Scalise (R) in 2017.

The editorial was posted online the evening of the second shooting and printed in the newspaper the following day.

Williamson testified it was her idea to include a map from Palin’s political action committee (SarahPAC) that superimposed the image of a crosshairs-target over certain Democrat congressional districts. Giffords’ was one.

Vogt pointed out that Williamson did not include in the editorial rhetoric from Democrats, such as President Obama’s quote, “If they bring a knife to the fight, we bring a gun.”

Williamson also testified she did not use the word “incites” in her draft, which is a keyword for the plaintiff, and the entire piece was substantially rewritten by James Bennet, an editor.

An email from Bennet to Williamson confirms this, as he wrote, “I really reworked this one.”

“I had skimmed what he sent me but did not read it in any meaningful way,” she said. Williamson testified Bennet never asked her to factcheck anything he wrote.

After the editorial was posted on its website on June 14, 2017, The New York Times immediately felt the fallout. Readers interpreted the piece as an indictment against Palin.

An email at 5:08 the following morning confirmed Bennet knew there was no incitement from the SarahPAC map leading to the first shooting.

Williamson and others were put on damage control and tried to gather facts that would be integral to the correction they needed to post and print.

Defense attorney David Axelrod spent a good part of his cross examination on the corrections that followed on the newspaper’s website, in the print edition, and on Twitter as well.

In a text message from Bennet to Williamson on June 15, 2017, Bennet wrote, “We’ll do the right thing,” regarding corrections.

The first correction was issued 12 hours after the editorial was posted.

Axelrod questioned Williamson about her motives while writing her draft, which included the wording she used when referring to SarahPAC.

“Were you writing about Sarah Palin, or the political action committee?” Axelrod asked Williamson.

“I was writing about the political action committee because they were the ones circulating the map,” she replied.

“Did you intend to harm Sarah Palin in any way?” he asked.

On redirect, referring to calling out violent rhetoric by both parties, Vogt pointed out the editorial board never addressed comedian Kathy Griffin′s meme of her holding President Trump’s severed head, which came out two weeks before the 2017 shooting.

Vogt alluded to the correction in the print edition of June 16, 2017, being barely a correction at all, since it said “a political action committee” and never directly mentioned SarahPAC or Palin.

The trial is anticipated to last no more than two weeks.