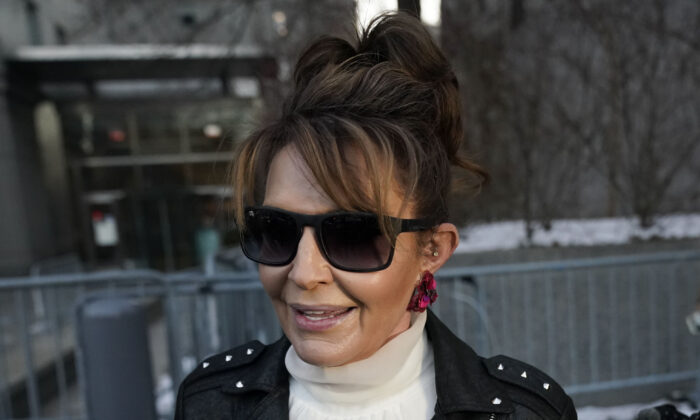 Jurors considering whether the New York Times defamed former Alaska Gov. Sarah Palin were alerted when the judge overseeing the case announced his plans to override their decision if they opted to side with Palin, the judge revealed on Feb. 16.

U.S. District Judge Jed Rakoff, a Clinton nominee, announced Feb. 14 that Palin failed to prove her case and that he would intervene if the jury sided with her.

Jurors weren’t in the room at the time the judge said he wanted them to reach a verdict, so an appeals court weighing the matter—if Palin appeals—would have the benefit of knowing the decisions were made independently.

The problem is, several jurors alerted the court’s law clerk that they found out about Rakoff’s action before the verdict was rendered.

“These jurors reported that although they had been assiduously adhering to the court’s instruction to avoid media coverage of the trial, they had involuntarily received ‘push notifications’ on their smartphones that contained the bottomline of the ruling,” Rakoff said in a filing.

The jury ended up ruling against Palin, who had accused the New York Times of defaming her by linking her to a mass shooting.

Lawyers for Palin and a lawyer for the defendants didn’t return requests for comment.

The jurors who became aware of Rakoff’s decision told the law clerk that his decisions had not affected them or played a role in their deliberations.

Rakoff noted that neither side objected to his plan to render his decision but let the jury reach a verdict.

“Nevertheless, in an excess of caution, the court hereby brings the foregoing facts to the parties’ attention. If any party feels there is any relief they seek based on the above, counsel should promptly initiate a joint phone conference with the court to discuss whether any further proceedings are appropriate,” he said.

One of Palin’s lawyers, Kenneth Turkel, told reporters after the verdict was handed down that the team was disappointed with the verdict and Rakoff’s order.

“Obviously, we felt yesterday’s order was disappointing. From our perspective, it was premature. Nonetheless, that’s what a judge does, and we have to live by those rules. We can’t come into court, seek redress, seek jury trials, and then complain about the hand the system plays us. We complain about that at the next level,” he said.

Palin’s team was planning to “evaluate all of our options,” he added.

Dave Paone contributed to this report.