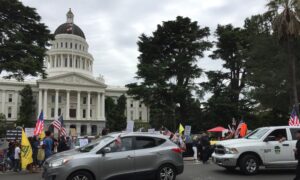 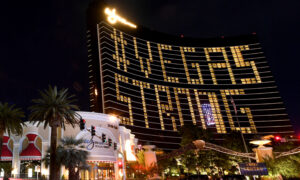 Las Vegas Mayor: No Social Distancing Guidelines for Reopening: 'They Better Figure It Out. That's Their Job'
0 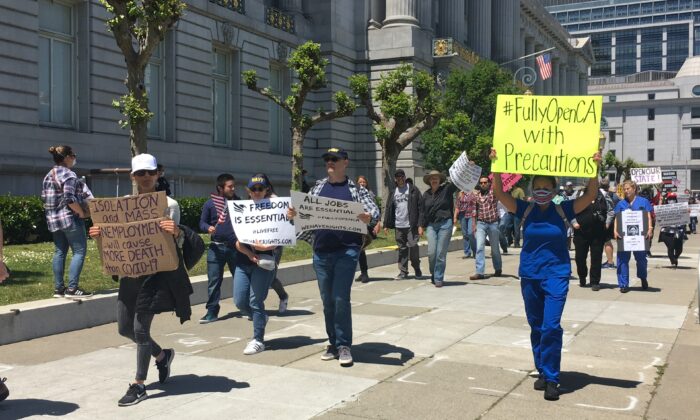 On May 1, over 100 people gathered with signs and flags in their hands, chanting, “Open California.”

They are part of a statewide movement called We Have Rights. They want to reopen California so that they can resume a normal lifestyle.

“Freedom is extremely important, and we need to go live our lives,” Eve Librtone, a therapist, told The Epoch Times. “I’m very concerned for people’s mental health. I’m very concerned [about] the impact of people losing their jobs.”

“The cure is worse than the disease,” she said. “Our economy being destroyed is going to ruin the lives of millions of people and cause a lot of harm and suffering.”

“We can’t work. So I’m to the point where we can’t pay our rent,” Vanessa Madrid, founder of Latinos for Medical Freedom, told The Epoch Times. “All jobs are essential. Putting food on a child’s table is essential; providing shelter is essential.”

“Without any disrespect to the patients that lost their lives to the virus, at this point, isolation is the worst for the majority of the people and their mental health and physical health,” Emily Hindsman, a registered nurse, told The Epoch Times.

“We’re worried about people getting sick from this, but we can reopen California safely,” said Hindsman. “We can use masks, we can wash our hands, we can keep a little bit of distance, and we can safely reopen everything.”

In an exclusive interview on American Thought Leaders, Dr. Roger McIntyre, a Professor of Psychiatry and Pharmacology at the University of Toronto, explained how leaders can help minimize CCP-virus-related suicide and depression.

In late April, the San Francisco Bay Area extended its shelter-in-place order through the end of May. At the same time, it announced it will loosen some restrictions to allow recreation, outdoor businesses, and construction.

However, some people believe the pace needs to speed up with precautions.

“People need to work, not just for pay so that they could afford to live, not just for sustenance, but because it gives them a sense of purpose, and it connects them to the community,” said Dennis.

In terms of California as a whole, he believes the state should move to phase 3, allowing higher-risk environments like hair salons, theaters, and in-person religious services to open, with limits on the size of gatherings.

“I would allow most businesses to open, and then identify people who are vulnerable and ask them to take protections, either stay at home, work at home, or wear materials that protect them,” said Dennis.

The protesters also believe that the current regulations go against what the country’s values are founded on.

“It’s a matter of our God-given rights as enshrined in the Constitution and the First Amendment to pursue happiness,” organizer Clint Griess told The Epoch Times. “So the right to work is not up to the city or state to take away from us.”

He thinks the lockdown is being done in an arbitrary way by assigning some jobs and businesses as essential and others not.

According to Griess, their permit for the protest was denied, but they congregated anyway before walking around the block. Law enforcement officers were nearby to keep people safe, and they did not issue any citations.

“The consequences of the shutdown are going to be widespread and incalculable in terms of the health and wellbeing of the people,” said Griess. “You don’t shut down the economy and expect no consequences.”

“I just feel like my humanity has been taken away,” Zoli Johnson, a Bay Area web developer, told The Epoch Times. “I feel anxious when I’m near people, like ‘Oh my God, I’m actually closer than six feet’ or ‘Oh my God, is it illegal to show my face?’”

“I just think it’s pretty much overblown,” Jeff Ratti, a Bay Area resident, told The Epoch Times. “The rules [Governor Gavin Newsom] puts on are too stringent for us.”

“The people did what they were told to do, they stayed inside, but now it’s time to end that and start opening up, smartly, little by little. You don’t have to open it up all at once. But people are ready to get out and do things,” said Ratti.

“We can’t stay home forever. We can’t stay in isolation until this is eradicated, because at this point they’re saying that everyone will get it,” said Hindsman.

“We deal with flu season every year; there are infectious diseases, but we have to recognize that we can’t function and live in a world where people cannot go out and live their lives,” said Librtone. “I believe that the majority of people, if they do catch it, they’re going to recover, and it’s going to be okay.”