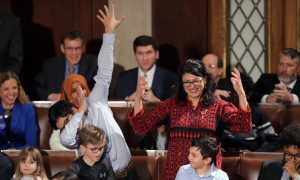 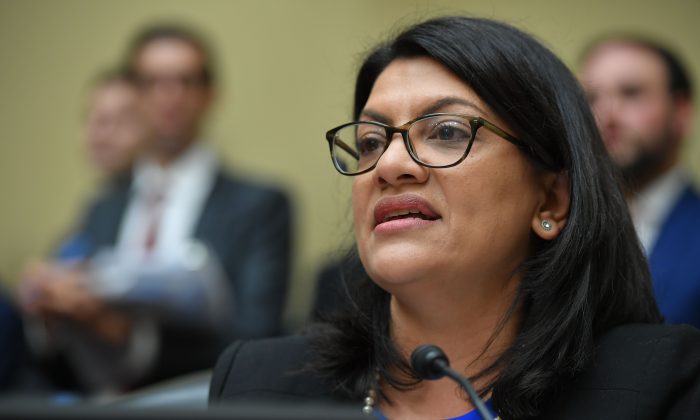 Rep. Tlaib Introduces Resolution to Start ‘Inquiry’ on Whether to Impeach Trump

Rep. Rashida Tlaib (D-Mich.) introduced a resolution on March 27 that would task the House Judiciary Committee to “inquire whether the House of Representatives should impeach Donald John Trump, President of the United States of America.”

The inquiry would have the power to issue subpoenas and take affidavits and depositions, while getting funds from the House accounts in “sums as may be necessary to assist the Committee on the Judiciary in conducting the inquiry under this resolution, any of which may be used for the procurement of staff or consultant services.”

While several prominent Democratic lawmakers have snubbed the idea of impeaching Trump, Tlaib, who ran with the endorsement of the Democratic Socialists of America, has been one of the few to openly raise the idea.

On the same day she took office in January, Tlaib made headlines with a remark to her supporters that “we’re going to impeach the [expletive],” referring to Trump. An online petition calling for her impeachment in response to the remark garnered more than 200,000 signatures by Jan. 14.

Impeachment requires the House to vote on an impeachable offense, somewhat inconclusively defined as “treason, bribery, or other high crimes and misdemeanors.” A simple majority vote in the House would secure the impeachment and send the charge to the Senate, where the case for removal is tried and a two-thirds majority is required for conviction and removal.

Rep. Brad Sherman (D-Calif.) introduced the impeachment resolution against Trump on the first day of the new Congress. It was referred to the Subcommittee on the Constitution, Civil Rights, and Civil Justice on Feb. 4, where it has remained, with no sign of getting out of the superior Judiciary Committee any time soon.

Sherman and several other Democrats have introduced such resolutions four times during the past year and a half, but the measures were either shelved or died in the House Judiciary Committee while the Republicans controlled the chamber.

Trump suggested his popularity among Republicans stands in the way of any impeachment efforts.

“How do you impeach a president who has won perhaps the greatest election of all time, done nothing wrong (no Collusion with Russia, it was the Dems that Colluded), had the most successful first two years of any president, and is the most popular Republican in party history 93%?” he said in a Jan. 4 tweet.

House Judiciary Committee Chairman Jerrold Nadler (D-N.Y.) said that “you should be very reluctant” to initiate impeachment, partly because one wouldn’t want to “tear the country apart” over it.

“You don’t want half the country to say to the other half for the next 30 years, ‘We won the election. You stole it from us,’” Nadler told MSNBC’s “Morning Joe” in November 2018. “You have to be able to think at the beginning of the impeachment process that the evidence is so clear, or offenses so grave, that once you’ve laid out all the evidence, a good fraction of the opposition, the voters, will reluctantly admit to themselves, ‘They had to do it.’”

More recently, a similar argument was made by House Speaker Nancy Pelosi (D-Calif.).

“I’m not for impeachment,” Pelosi told The Washington Post in an interview published March 12. “Impeachment is so divisive to the country that, unless there’s something so compelling and overwhelming and bipartisan, I don’t think we should go down that path, because it divides the country.”