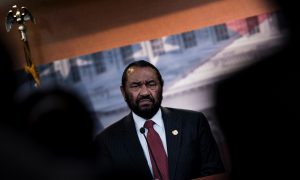 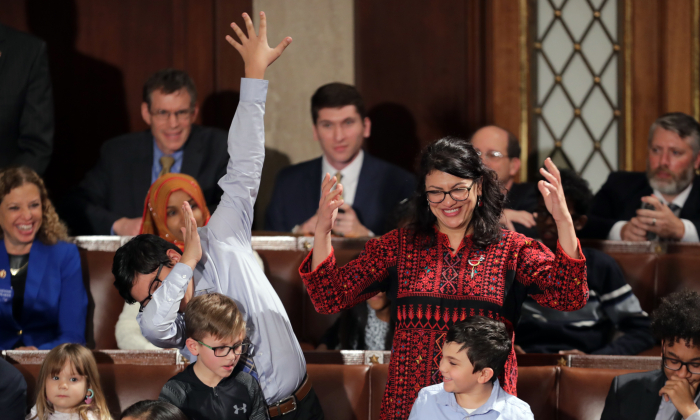 Rep. Rashida Tlaib (D-MI) votes for Speaker-designate Rep. Nancy Pelosi (D-CA) along with her kids during the first session of the 116th Congress at the U.S. Capitol January 03, 2019 in Washington, DC. (Chip Somodevilla/Getty Images)
US

Newly-elected Rep. Rashida Tlaib (D-Mich.) used an unprintable expletive to refer to President Donald Trump during a speech to a crowd of supporters shortly after being sworn into Congress on Jan. 3.

Tlaib used the expletive to cap off a speech in which she underlined her Palestinian heritage, Muslim faith, support for groups Black Lives Matter, and desire to take on billionaires like the Koch brothers.

“People love you and you win. And when your son looks at you and says, ‘Momma, look you won. Bullies don’t win.’ And I said, ‘Baby, they don’t, because we’re gonna go in there and we’re gonna impeach the [expletive],” Tlaib said to an outburst of applause and cheers from her supporters.

Far-left Democrats like Rep. Maxine Waters (D-Calif.) have long vowed to impeach the president. Rep. Brad Sherman, (D-Calif.) re-introduced the articles of impeachment on the first day of the new Congress on Jan. 3. The bill is identical to the one he introduced in July 2017.

On the morning before Tlaib’s expletive-laden speech, The Detroit Free Press published her op-ed calling for Trump’s impeachment. In the op-ed, Tlaib alleges, without evidence, that Trump “has committed impeachable offenses.” Her long list of Trump’s alleged crimes includes “ordering the cruel and unconstitutional imprisonment of children and their families at the southern border,” obstructing justice, and advocating illegal violence. The president was never charged with any of the offenses Tlaib listed.

Tlaib was one of several openly-socialist candidates elected to Congress in 2018. The Greater Detroit Democratic Socialists of America endorsed her candidacy in May 2018.

The Constitution requires the House of Representatives to charge the president with “high crimes and misdemeanors” to initiate the impeachment process. The Senate then considers the charges with the chief judge of the Supreme Court presiding over the trial and the 100 senators serving as the jury. A supermajority vote consisting of 67 senators is then required if the president is to be removed. Republicans currently hold the majority in the Senate by a margin of 53-47 for the next two years.

“Dems are more focused on stopping Trump than building the Wall and helping the country,” Rep. Jim Jordan (R-Ohio) wrote on Twitter. “We knew they couldn’t help themselves.”

Rep. Nanci Pelosi (D-Calif.), who was re-elected as the speaker of the House on Jan. 3, told reporters that she is not ruling out impeaching Trump.

Some of Pelosi’s fellow Democrats have already hinted that these oversight investigations could lead to impeachment proceedings against Trump, depending on the findings of committee hearings and special counsel Robert Mueller’s separate findings from his investigation into the 2016 presidential election and alleged Russian interference.