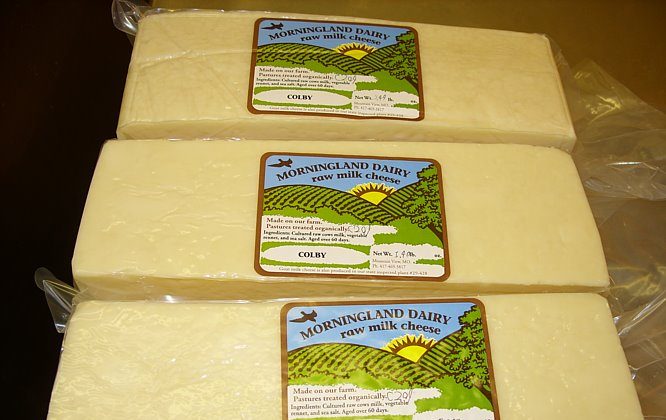 Cheesemakers at Morningland Dairy divide the cheese in half on either side of the vat, allowing extra whey to drain, and cut the curd into approximately 10-inch squares. (Morningland Dairy)
Opinion

On Jan. 25, 2013, the Missouri State Milk Board (SMB) destroyed over 18 tons of raw milk cheese produced by Morningland Dairy Farm, despite questionable testing and trial procedures.

The farm had been making cheese in the Ozark Mountains for over 30 years and never received one reported case of illness. Yet federal regulators, the Missouri attorney general, and the SMB all insist that the farm’s cheese poses a danger to public health.

The trouble began far from the “Show Me State” on June 30, 2010, when officials raided Rawesome Foods, a raw health food co-op in Venice, Calif. In a scene more like a drug bust than a food safety inspection, officers stormed the private club with guns drawn, confiscating potentially hazardous yogurt, honey, and almonds.

Two kinds of Morningland raw milk cheese—garlic and hot pepper Colby—were seized in the raid. The California Department of Food and Agriculture did not test the product for a full 55 days after the bust—and it remains unclear how the sample was treated in the interim—but when lab results emerged, Missouri officials were told that both cheeses tested positive for the bacteria called listeria.

Morningland was selling cheese in over 100 different health food stores across the country at the time of the Rawesome bust, and everything matching that batch date had all been safely consumed. Nevertheless, SMB inspector Don Falls had orders to embargo all Morningland’s cheese—$250,000 worth—until further notice.

Farm owners Joe and Denise Dixon were at a prestigious Seattle cheese conference when they discovered that their dairy was in trouble. Joe Dixon said it hurt to think that his family’s hard work might have to be destroyed, but his first thought was on making things right.

“When someone says you have a problem, our first goal is to make sure we’re not going to harm anybody. Because if it’s going to harm somebody, it needs to be destroyed,” he said. “We said that if it’s really contaminated we will destroy the cheese ourselves—but prove it’s contaminated.”

It is important to note that Morningland cheese was made from unpasteurized milk—a product that regulators vehemently condemn. While retail sale of raw cheese is legal in most states—and has remained a relatively safe product for thousands of years—the Centers for Disease Control (CDC) and the U.S. Food and Drug Administration (FDA) both view this food with great suspicion and concern.

In a 2012 report on raw milk, the CDC stated that before pasteurization, dairy was dangerous, and “raw milk was a common source of the bacteria that cause tuberculosis, diphtheria, severe streptococcal infections, typhoid fever, and other foodborne illnesses.”

Robert Tauxe, deputy director of the CDC Division of Foodborne, Waterborne, and Environmental Diseases, summed up the agency’s official stance in a press release for the report where he recommends “restricting the sale of raw milk products” in order to improve public health.

Pete Kennedy, attorney and president of the Farm-to-Consumer Legal Defense Fund, said that while regulators have long held an “anti-raw dairy agenda,” in recent years they have aggressively stepped up their attack, systematically shutting down many small dairy farms across the country.

According to Kennedy—whose organization has worked closely with the Dixons in support of their legal battles—the FDA saw in Morningland an opportunity to put a producer out of commission.

“The FDA actually pressured Morningland to issue a voluntary recall, and they put out a press release on behalf of Morningland—which they’re not supposed to do without the farm’s consent,” Kennedy said. “It’s important to know what really happened to Morningland.”

When federal officials investigate suspect dairy farms, they swab the entire facility in search of dangerous bacteria. But according to Kennedy, the test is designed in such a way that the deck is strategically stacked against the farmer.

“Environmental swabs are a great concern to producers because listeria is everywhere,” he explained. “There are thousands of different subtypes of listeria, and most of them are on record as not causing illness in humans.” But once they find a positive test, they don’t take a subsequent test to determine the subtype—one that’s actually on record as having made people ill.”

“My opinion is that listeria is the ace in the hole for the FDA,” Dixon said. “It’s ambiguous to the environment, which means it’s everywhere. Think about it: there’s no such thing as zero, but there’s a zero tolerance policy in the United States of America. So they can pick and choose who they shut down.”

Dressed in military fatigues, FDA officials arrived at Morningland to collect their samples. In the five weeks it took to get results from the lab, the farm’s cheese remained under embargo, and the Dixons were forced to dump all the milk the dairy produced.

“For five weeks we had no income coming in, and we still had to milk and feed the cows,” said Dixon. “Our budget was stressed to the limit. We sold 16 cows just to pay the bills.”

Officials took 100 swabs of Morningland Dairy—down drains, under dairy barn legs, deep in cracks—and to the surprise of regulators, each one came back negative. Yet officials said it still was not enough to undo the damage from the California test.

Dixon contacted California authorities to get a sample of the cheese they tested as required by laws in both states, but the California officials refused. Dixon asked inspector Falls if the Missouri SMB could do a test on their embargoed cheese, but he was told that was not an option either.

Dixon was told that he could do a test himself, and Falls gave him a business card for a laboratory. The next day, Morningland Dairy manager Jedadiah York personally transported 14 samples to a St. Louis facility three hours away.

“My wife and I were still thinking that the state is here to help, that these people are here to make life better,” Dixon said. “We’re not ignorant of the world, but you hope and pray that your government agencies are there to make things better.”

But things only got worse for the Dixons. When the test came back “weakly positive”—meaning that it contained proteins resembling those found in listeria—the SMB ordered that the farm’s entire stock be destroyed.

The Dixons were still not convinced that their cheese was contaminated, and they soon discovered that in a definitive contamination test—like those done in Europe where regulators are much more tolerant of raw dairy—the lab tests for levels slightly above the inherent ambiguity of environment.

According to experts, even in the United States a proper cheese test involves a tryer—a cylindrical device that grabs a sample from the center of a block and not just a random piece off the shelf, as was done in Dixon’s test.

“Our plant manager ignorantly thought that if we did everything they said just the way they said it everything would be fine,” said Dixon. “But it was never actually tested with a tryer to actually test our cheese. That’s why we’ve fought tooth and nail.”

Morningland set up a blog, detailing the history of the FDA’s actions and asking the public to “sponsor a cheese“—make a donation to help the farm out with expenses and legal fees.

Representatives from the St. Louis laboratory said that they did not want to get involved in a controversy with regulators, but the SMB still was not interested in conducting their own test. When Dixon refused to destroy his cheese, the Missouri attorney general took Morningland to court.

The Dixons wanted a trial by jury, but their request was denied because the case was related to regulation. In addition, the FDA’s swab results were not allowed into evidence because regulators said they were not relevant—and the SMB claimed the test Dixon had personally done as their own.

“Don Falls swore under oath in court that that was the state’s test. I paid for them. How could those be the state’s tests?” Dixon said. “They refused to do any testing whatsoever on our cheese.”

The Epoch Times talked to Christine Tew from the Missouri SMB’s public relations department to discuss options for an interview and emailed a set of questions related to the case—Why wouldn’t the state do a test? Were the milk board’s actions typical of protocol? Did they believe Morningland was treated fairly?

In an email statement, the Missouri Agriculture Department replied that SMB “oversaw the sample selection process to ensure proper packaging and handling methods,” in Dixon’s test. The department added that the private testing facility “is a well-known and respected laboratory that utilizes FDA guidelines in testing foods.”