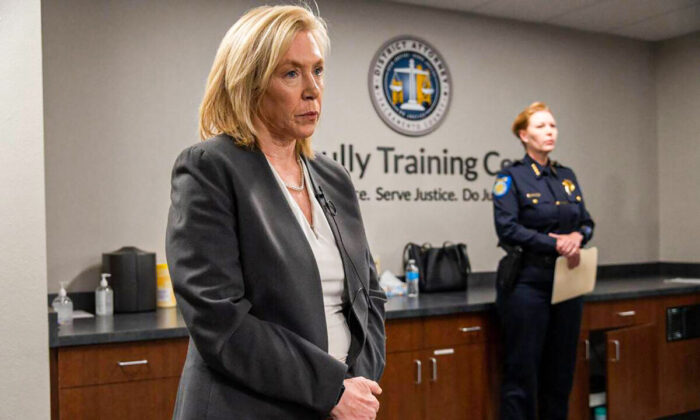 As stories of smash-and-grab robberies, thieves targeting media crews, and fatal shootings have filled headlines in recent months, two criminal prosecutors say some of this criminal activity may be the result of policy changes in California shifting the law from protecting victims to shielding suspects.

Over the past decade, California has implemented a number of criminal law reforms to reduce its prison population.

In May 2011, the U.S. Supreme Court ruled that “the medical and mental health care provided by California’s prisons has fallen short of minimum constitutional requirements and has failed to meet prisoners’ basic health needs,” with overcrowding highlighted as the main cause.

Following this ruling, lawmakers and voters passed a series of measures that reduced sentences for certain crimes and diverted offenders from state prisons to county jails.

Starting with Assembly Bill 109, state lawmakers proposed and voters passed a measure that allows non-violent, non-serious, and non-sex offenders to be supervised at the local county level after being released from California state prisons.

The legislation established the California Public Safety Realignment Act of 2011 and aimed to meet the Supreme Court order to reduce the prison population in the state’s 33 prisons (now 34 prisons, according to a February 2022 report).

In 2014, California voters passed Proposition 47, which classifies stealing up to $950 as a misdemeanor crime (up from $400). The law also reclassified some drug possession offenses from felonies to misdemeanors, punishable by up to one year in county jail.

Proposition 47 has become more controversial in recent months, as some residents and officials have attributed the law to the recent rise in theft. California’s string of smash-and-grab retail thefts, which began near the end of 2021, prompted state legislators to introduce measures that would either repeal or amend Proposition 47 in an effort to address the rising crime.

However, lawmakers remain divided on the issue and none of the measures have passed the state legislature.

“You’ve got good legislators, like Assemblymember Jim Cooper, who are trying to pass a bill that would just put a GPS device on a high-risk parolee and our legislature is saying ‘No,'” Schubert said. “That is just illogical and it’s not good for public safety.”

In 2016, voters passed Proposition 57, which allows felons to earn credits through sustained good behavior and by participating in educational or training assignments, among other programs, while in jail to reduce their sentences and expedite their release.

“Many of us in this profession of prosecutors and law enforcement have been kind of ‘sounding the alarm’ before Prop. 57 had passed,” Schubert said. “We said, ‘If you just start handing out credits to dangerous people or you let them just easily let violent people out of prison early without adequate rehabilitation, then we’re failing.’”

The CDCR cited the need to reduce the spread of COVID-19 within jail facilities as part of its push for reduced sentencing and reduced inmate population. As of May 16, there have been 50 reported deaths among prison staff and 254 deaths among inmates since the start of the COVID-19 pandemic.

In April, the CDCR then proposed making the accelerated credit system permanent. Proponents at an April 16 public hearing said the change promotes participation in rehabilitation and educational services.

“If you take away these rehabilitative credits from people who strongly want to change their lives and want to earn these credits, you’ll be doing a disservice to them and to the humanity of who we are as a nation,” Reda Chaple, from the Anti-Recidivism Coalition, said during the hearing.

However, opponents and a handful of district attorneys said the idea would harm public safety if criminals are released before finishing their sentences.

“People that go to prison now in California, it took a lot of effort to get there,” Schubert said. “Either they are repeat offenders, over and over again, or they committed a very particularly violent crime, such as murder or sexual assault. So the population in our prison system now are the most dangerous of the most dangerous.”

Critics were quick to point to Proposition 57 and the reduced sentencing system following a shooting on April 3 near the state capitol. An unspecified gang dispute led to a shootout in downtown Sacramento, killing six people and injuring 12. An investigation found that some of the suspects were repeat felons who had been released from prison just weeks before the incident.

In addition to criminal laws, California prosecution and sentencing laws have also changed. In 2017, Senate Bill 620 removed a prohibition on firearm charges. Under this law, a court may now strike charges involving gun use in a criminal case “in the interest of justice,” the legislation’s text states.

According to data from the California Department of Justice, prosecution rejections in criminal cases are at their highest rates since the 1980s.

“I think that DAs [district attorneys] these days in certain jurisdictions are trying to become very progressive and less about punishment and more just about services,” Chung said. “They’re losing their focus on their main responsibility, which is to enforce laws.”

He referred to an attempted murder case that the district attorney had asked him to dismiss. Chung said the case involved a young man who allegedly robbed three stores with a gun and shot at a bystander in the third store. The bystander wasn’t struck and fled the scene.

The Epoch Times reached out to District Attorney Jeff Rosen for comment, but didn’t hear back by press time.

Both Chung and Schubert said the ​​state legislature needs to strengthen criminal laws, allow prosecutors to prosecute criminal offenders, and roll back policy reforms that are leading to early releases.