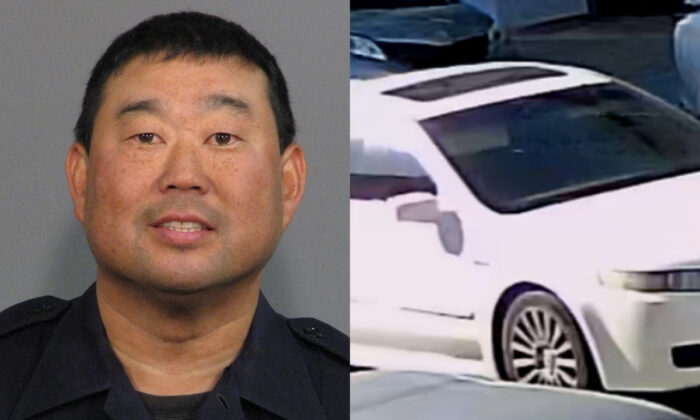 Kevin Nishita, left, is seen in a file photograph. Nishita died on Nov. 27, 2021, from wounds he suffered while guarding a news crew in Oakland, Calif., earlier in the week. On left, an image from surveillance footage shows a white Acura police say was involved in the shooting. (San Jose Police Department; Oakland Police Department)
Crime and Incidents

Guard Dies After Being Shot During Attempted Robbery in California

A security guard died from wounds he suffered while trying to protect a news crew in California, authorities said Saturday.

Kevin Nishita, an ex-police officer who worked as an armed guard for the Star Protection Agency, was helping guard a KRON-TV crew on Wednesday in Oakland when somebody tried stealing the crew’s camera equipment.

Nishita was shot in the lower abdomen and rushed to the hospital.

“We are devastated by the loss of security guard and our friend,” Jim Rose, KRON-TV’s vice president and general manager, said in a statement.

“This senseless loss of life is due to yet another violent criminal act in the Bay Area. We hope that offering a reward will help lead to the arrest of those responsible so they can face justice for this terrible tragedy,” he added.

Star Protection Agency, KRON-TV, its parent company, Crime Stoppers, and police officials are offering a reward of $32,500 for information that leads to an arrest or arrests in the case.

The killing is being investigated by the police department’s homicide detectives.

A surveillance photograph released Saturday showed a white Acura TL with four doors, a sunroof, and no license plate. Police believe the vehicle, which is from between 2004 and 2008, was used in the attempted robbery and shooting.

Anybody with information was asked to contact the police department or Crime Stoppers of Oakland.

“As you know it’s been an extremely violent week. We are asking if you were in the area, have a business or live nearby to please check your surveillance footage as you may have captured the crime before, during, or after it occurred,” Kim Armstead, an Oakland police spokeswoman, told reporters earlier in the week.

California has been beset by a string of mob robberies in recent weeks. During the robberies, large groups descend on stores, smash their way in or otherwise rush inside, and grab items before leaving in waiting vehicles.

The incidents have primarily happened in the San Francisco Bay Area.

The KRON-TV crew was covering a robbery that happened at a clothing store on 14th Street that involved a dozen criminals.

The reporter was not struck.

A nearby homeless man was reportedly hit but was treated and was in stable condition.

The robbery happened after what was described as “roving caravans of hundreds of vehicles” entered Oakland on Nov. 29 and stole from cannabis operations in the city, according to Oakland Police Chief LeRonne Armstrong.

Armstrong called for city leaders to step up and address the spike in violent crime and the department later said it was deploying tactical teams on streets to help patrol officers deal with “the armed caravans, illegal sideshows, and other violent crimes.”