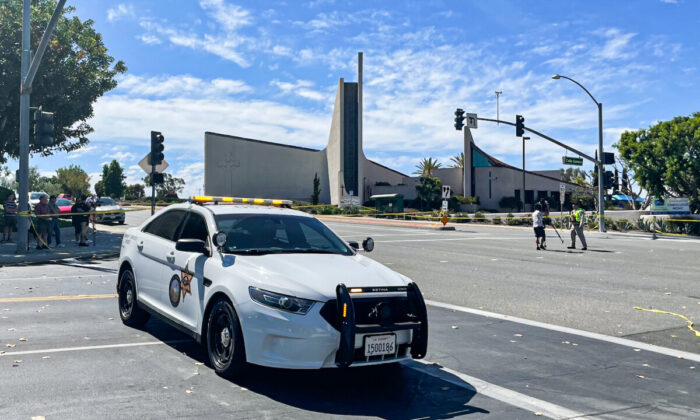 An Orange County Sheriff's Department car is parked outside of Geneva Presbyterian Church after a shooting left one dead and four critically injured in Laguna Woods, Calif., on May 15, 2022. (Vanessa Serna/The Epoch Times)
Southern California

One Dead, 5 Injured in Shooting at Southern California Church

LAGUNA WOODS, Calif.—Taiwanese churchgoers tackled and hogtied a gunman at an Orange County church on May 15, cutting short a shooting rampage that killed one and injured five.

Deputies received a call about a shooting at Geneva Presbyterian Church on the 24000 block of El Toro Road at 1:26 p.m., according to the Orange County Sheriff’s Department (OCSD).

One deceased victim, four critically wounded victims, and another with minor injuries were found. All victims are adults and have been sent to three area hospitals.

Police said they detained an Asian male suspect in his 60s quickly at the scene and recovered two handguns that were believed to have been used in the shooting.

About 35 to 40 people witnessed the shooting at the church and are being interviewed by police.

The shooting occurred as the Taiwanese group was having lunch after a church service.

After a group of parishioners took down the gunman, they reportedly tied his legs with an extension cord and took his weapons.

“If people had not intervened, it would’ve been worse,” said OCSD Undersheriff Jeff Hallock.

The motive of the shooting remains under investigation. It’s unclear if he was part of the congregation.

“Churches are intended to be safe sanctuaries from hate and violence,” said Orange County District Attorney Todd Spitzer. “That serenity was shattered this afternoon by a gunman who unleashed unspeakable violence in a house of worship.”

The office of California Gov. Gavin Newsom wrote on Twitter, “We are actively monitoring the shooting at a church in Laguna Woods and working closely with local law enforcement. No one should have to fear going to their place of worship. Our thoughts are with the victims, community, and all those impacted by this tragic event.”