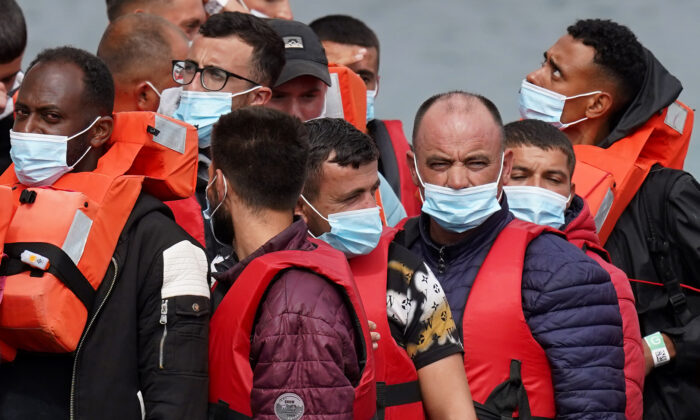 Illegal immigrants, whose small boat was intercepted in the English Channel, are escorted ashore from a Border Force vessel in Dover, Kent on Aug. 23, 2022. (PA)
UK

Home Secretary Priti Patel has invited police officers from Albania to come to England to help tackle a wave of illegal immigrants crossing the Channel in recent months.

A Home Office report published on Thursday revealed the number of Albanians arriving in the UK on small boats from France and Belgium had increased “substantially” since the beginning of the year.

The number of Albanians who arrived across the Channel between January and June 2022 was 2,165, compared to just 23 detected in the same period of 2021.

The report said: “The number of Albanians arriving on small boats has increased substantially over the last quarter. Prior to this point, Albanians were not commonly detected on small boats.”

The report said Albanians made up 18 percent of those on the small boats, along with Afghans (another 18 percent) and Iranians (15 percent).

It has also emerged that less than 1,000 Albanians have been deported from the UK since an agreement was signed between London and Tirana last year.

Patel met Albania’s interior minister Bledi Çuçi on Tuesday night to discuss the issue and the Home Office said they agreed to speed up the removal of Albanians who had no right to be in the UK from next week.

Çuçi also offered to send Albanian police officers to the Kent coast to see if they could help with intelligence-gathering, although it is not clear if this would happen immediately.

On Monday a record number of illegal immigrants—1,295—crossed the Channel in a single day.

Earlier this month Albanian journalist Muhammad Veliu told The Epoch Times many of the illegal immigrants were coming from impoverished parts of northern Albania and hoped to join relatives who came to Britain “in the first wave” in 1998.

He said Kurdish gangs, who bought large numbers of small inflatable boats from China, were in charge of the people trafficking routes and Albanian middlemen were recruiting passengers with aggressive marketing, especially on TikTok.

TikTok claimed earlier this month it was reviewing content which appeared to advertise smuggling people into Britain.

The Home Office said Albania is a “safe and prosperous country” and most of the illegal immigrants who arrived from there were making “spurious asylum claims.”

Lucy Moreton, from the Immigration Services Uniob, which represents Border Force officers, told the PA news agency on Thursday: “Members report the working hypothesis that the recent increases in Albanians is to replace those who have been arrested, imprisoned and/or deported as a result of increased police activity in the organised crime sphere. This is a hypothesis only, but does make sense.”

The number of Afghans arriving has increased markedly since the fall of Kabul to the Taliban in August 2021, from 247 in the first six months of last year to 2,066 in the same period in 2022.