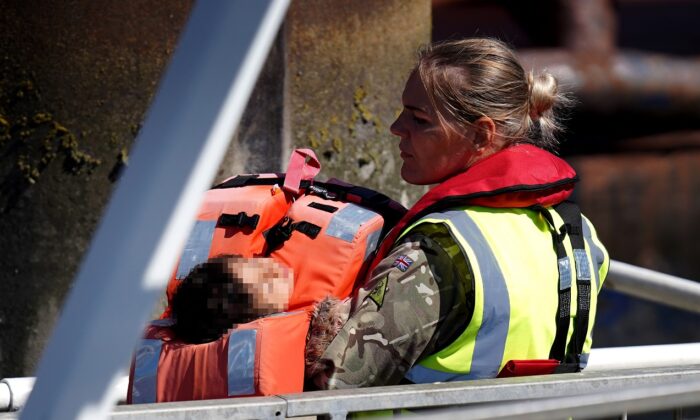 A young child is carried by military officer as a group of illegal immigrants are brought in to Dover, Kent, from a Border Force vessel, after being intercepted in the English Channel on Aug. 23, 2022. (PA)
UK

A record 1,295 illegal immigrants crossed the English Channel and arrived in Kent on Monday, the highest figure for a single day since the current system of record-keeping began in 2018.

The Ministry of Defence, which is operating Operation Isotrope—in which the Royal Navy intercepts small boats from France and Belgium and escorts them ashore—said 27 boats were spotted on Monday, with around 40 or 50 people each on board.

The former leader of UKIP and the Brexit Party, Nigel Farage, wrote on Twitter: “So, 1295 people illegally crossed the Channel yesterday. It is a new record. Nearly all young men, many from Albania. This is a disgrace.”

In April the Home Secretary, Priti Patel, signed a deal with Rwanda which involved sending illegal immigrants who had crossed the Channel to the African country while their cases were dealt with by immigration officials. Under the deal those who were rejected would remain in Rwanda.

The agreement was designed as a deterrent to those making the journey by sea, but 17,402 people have arrived by boat since it was signed.

The first deportation flight to Rwanda was grounded amid legal challenges in June and the matter is not expected to be decided by the British courts until October.

In early August Muhamed Veliu, a political correspondent with Top Channel in Albania, told The Epoch Times: “When the Rwanda deal was done we reported it in Albania and there was a concern for a month but it has not stopped traffickers. They have been advertising on TikTok and saying ‘hurry up, no one will send you to Rwanda.’”

More than 22,600 people have arrived in the UK by boat this year, compared to 12,500 at the same point last year. If Monday’s figures were matched every day the number by the end of August will exceed the 28,526 who made the crossing in the whole of 2021.

On Tuesday the Border Force cutter Hurricane intercepted another boat with 40 people on board, including a family with two young children. They were escorted to safety in Dover and then passed on for processing at a former army barracks in nearby Manston.

Last month armed forces minister James Heappey denied a claim made by Labour MP John Spellar at a Defence Select Committee hearing that the Royal Navy had been reduced to the role of “tour guide” for illegal immigrants heading for southern England.

“That would be a really unfair reflection of the work they’re doing,” said Heappey, who confirmed Operation Isotrope was due to be reviewed in January 2023 and it was hoped Home Office staff would take over much of the stewarding from the armed forces.

A government spokesman told PA: “The rise in dangerous Channel crossings is unacceptable. Not only are they an overt abuse of our immigration laws but they risk the lives of vulnerable people, who are being exploited by ruthless criminal gangs.”

He said the new Nationality and Borders Act was breaking the “evil criminals’ business model” and pointed to 38 people who were arrested in a cross-border operation in July.

“Under our new Migration and Economic Development Partnership with Rwanda, we are continuing preparations to relocate those who make these unnecessary and illegal journeys, helping to save lives by deterring others from crossing,” the spokesman added.