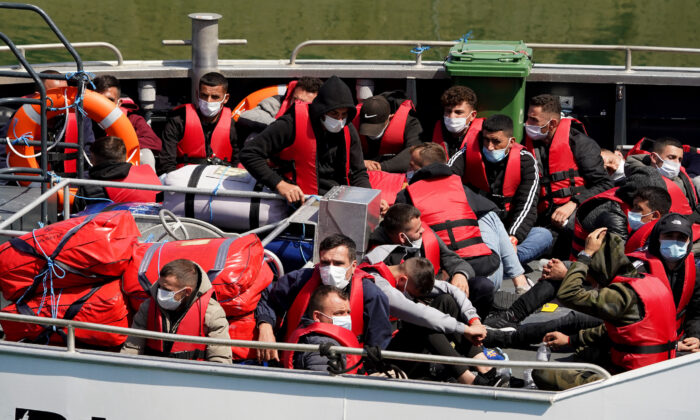 A group of people thought to be illegal immigrants are brought in to Dover, Kent, England, onboard a Border Force vessel on July 18, 2022. (Gareth Fuller/PA Media)
UK

It comes after the content was flagged by British media outlet GB News.

The videos, some of which were sent to the broadcaster by an unnamed audience member, appear to target Albanian-speaking migrants who want to go to the UK.

One of the videos shows a sequence of footage starting from a parked Wizz Air flight with the captain saying “Rinas”—an Albanian village—to streets in Brussels and Paris, then to the French coastal city of Dunkirk, before showing a map of the English Channel, complete with the word “water,” a laughing emoji, and British and Albanian flags.

The video then shows the River Thames in London, and what seem to be rubber boats and other equipment, with a caption that translates as, “We are not the only ones but we are the best.”

After GB News contacted TikTok over the videos, a spokesperson for the platform said the content was under review and will likely be banned.

“Our policies state that to prevent users from engaging in life-threatening activities or being exploited by others, content depicting, promoting, coordinating, or facilitating human smuggling is not allowed on TikTok,” the spokesperson said.

“I am currently reviewing the content with the relevant language support, the accounts flagged are likely to be banned as per policy mentioned above.”

According to GB News, TikTok had banned four accounts flagged by the broadcaster.

A spokesman for the UK’s Home Office said: “Posts used by people smugglers to promote lethal crossings are totally unacceptable and requires social media companies to engage in dialogue to prevent their platforms [from] being exploited.

“The government is tackling this online disinformation, recently launching our own social media campaign to warn people of the risks of these deadly journeys and expose the lies sold to vulnerable people by inhumane smugglers.”