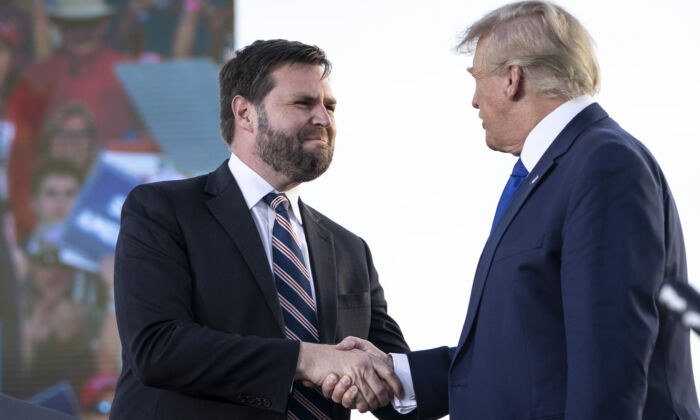 Fueled by Donald Trump’s endorsement, Hillbilly Elegy author and venture capitalist J.D. Vance has surged to a five-point lead in the Ohio GOP U.S. Senate race, according to a Fox News survey of Ohio voters participating in the May 3 GOP primary that was released on April 27.

The winner is far from certain, though, with 25 percent of the respondents saying they are undecided.

Gibbons, Mandel, and Timken focused their campaigns on the “America First” platform with hopes of getting Trump’s endorsement. When the former president decided to support the candidate who once tweeted multiple disparaging remarks about him in 2016, it created a firestorm from every opponent in the race except Dolan, a moderate Republican state senator who has said he would most mirror retiring Sen. Rob Portman.

“He’s the guy that said some bad s**t about me. He did. But you know what? Every one of the others did also,” Trump said after endorsing Vance. “In fact, if I went by that standard, I don’t think I’d have ever endorsed anyone in the country.”

Timken, who was endorsed by Trump when she became chair of the Ohio Republican Party in 2017, admits that his decision to back Vance has altered the landscape in the final days leading to the May 3 GOP primary.

“It’s created a bit of chaos in the race, and it continues to be a jump ball,” Timken said.

Upon learning that she did not get Trump’s endorsement, Timken said that the race is about who can defeat likely Democratic party primary winner Tim Ryan in November.

“I am that candidate and I look forward to having President Trump’s endorsement in the general election,” Timken said on April 15.

“While I was traveling over 150,000 miles across Ohio doing that important work for the America First agenda, J.D. Vance was in Silicon Valley and cable news studios trashing President Trump, calling him an ‘idiot,’ ‘noxious,’ and publicly considering voting for Hillary Clinton to stop Trump.

“Ohio voters want someone who has fought and delivered for the America First movement – and won’t support an elitist who insulted their intelligence and then pretended to be MAGA when it suited his political ambitions,” Timken added.

The Fox News poll tells a different story. While Vance has seen a 12 percent rise in his numbers, Mandel saw a two-point decline, Gibbons’ support decreased by nine points, and Timken’s backing dipped by three points. At four points, Dolan is the only other candidate besides Vance to improve compared to Fox News’ March survey.

C.J. Bieghler lives in Greene County in southwest Ohio and is a staunch Timken supporter. Timken is still her choice on May 3.

“I really don’t pay attention to polls. With potentially millions of votes to be cast, I don’t pay attention to a survey of a few hundred participants, some who may not even end up voting,” Bieghler said. “Jane Timken was the first candidate to extol the America First agenda. She has the best and strongest ideas, and that will resonate with voters.”

Mandel, a former state treasurer and state representative who has focused his campaign on “Faith and Freedom” rallies in churches, led in the polls for several months. Momentum shifted when Gibbons and Mandel had a heated on-stage altercation at a March 18 debate.

Gibbons told Mandel, a U.S. Marine Corps veteran who served two tours in Iraq, that he had never worked in the private sector. Mandel objected to the comment, rose from his chair, and went nose-to-nose with the Cleveland investment banker, who once led in the polls, too.

FreedomWorks, the organization that hosted the forum, conducted a straw poll after the event. Vance won with 43.1 percent. Gibbons was a distant third and Mandel finished last with 4.6 percent. Vance’s campaign has flourished since then, but that doesn’t sway Amy Kissinger, who is voting for Mandel.

“I’m focused on the only poll that matters—the one on May 3,” Kissinger said. “I trust that conservative Ohio voters instinctively know what is best for Ohio. How great for us that we don’t have to take a risk on an unknown when Josh Mandel has already proven himself with his record as state treasurer and a representative in the Ohio House.

“Endorsements are great, but proof and reality are preferable, and that is what Josh Mandel brings to the table,” she added.

The April 26 Fox News poll also revealed that 42 percent of primary voters believe that Trump’s endorsement made them more supportive of Vance while 23 percent said it made them less supportive and 27 percent claimed the backing made no difference.

The Fox News poll also showed that 50 percent believe it is “extremely important” to support a candidate who can win in November compared to 27 percent who place importance on if a candidate is a strong Trump supporter.

Among respondents who prioritize winning in November, Vance placed first with a 13-point edge, and he topped the list of those who want a strong Trump supporter by eight points.

Juliet Tissot agrees with Trump’s feeling that Vance is the GOP’s best choice to defeat Ryan in November. She has supported Vance since he entered the race, and his previous criticism of Trump “never bothered” her.

“J.D. Vance explained that he was against Trump in the beginning because Trump was a Democrat turned Republican, and he thought Trump was just saying things to get elected and would not follow through on his promises.,” Tissot said. “Once he saw Trump exposing corruption and doing what he said he would do, J.D. became a believer.

“I think J.D. will be the voice of those who feel they have no voice,” Tissot added. “He will fight to secure our border and put America and Americans first. He’s the guy to beat Tim Ryan and keep Ohio red.”

Trump’s approval of Vance demonstrates an impact in a crowded field that has seen two other leaders at one point.

“The race is obviously close, and this is clearly a case in which an endorsement has made a difference,” Fox News Republican pollster Daron Shaw said. “With support spread out among five candidates who are pretty similar in policy terms, the bump that comes with Trump’s blessing is enough to jump Vance to the head of the pack.”

Gary Click, a pastor and Ohio state representative in northwest Ohio who is voting for Gibbons, thinks that the endorsements show that there are several viable candidates in the race.

“While Trump’s endorsement is significant, the winner is still undetermined because the largest number of voters—25 percent—remain undecided. I believe that is a sign of the high quality of the candidates,” Click said. “While making calls on behalf of Mike Gibbons, I talked to a conservative voter who I don’t think ever took his Trump sign out of his yard. He said he may not decide who he votes for until he walks into the voting booth.

“I feel like this story will repeat itself across the state,” Click added. “Gibbons still has as great of a chance as any of the candidates.

“Regardless of who prevails in the end, it is essential that we lay aside hurt feelings and rally around the winner to ensure we have the ability to regain control of the Senate.”