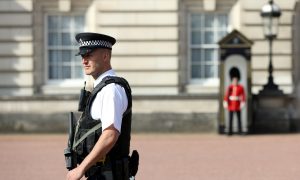 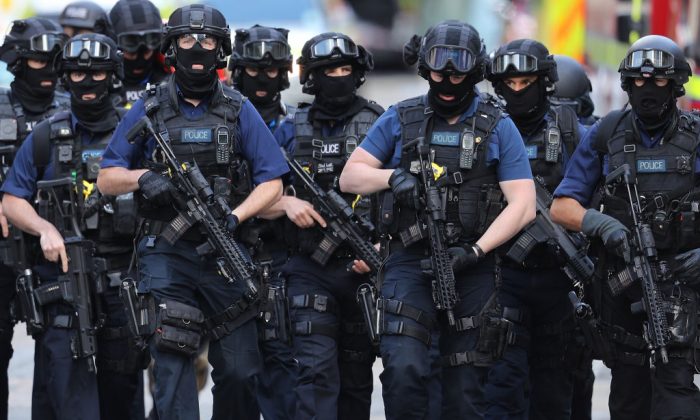 Counter terrorism officers patrol the streets a day after the terrorist attack in London Bridge, in London, on June 4, 2017. (Dan Kitwood/Getty Images)
UK

The CCP virus pandemic, social isolation, and a rise in extremist content online are contributing to a “perfect storm” that is making more young people susceptible to radicalisation, British police warned on Wednesday.

Between Jan. 1, 2019 and June 30, 2020, 17 children, some as young as 14 years old, were arrested in relation to terrorism offences, nearly all of whom had been radicalised entirely online, the UK’s anti-terrorism police revealed.

In the same time period, more than 1,500 children under the age of 15 were referred to the government-led Prevent programme, which aims to curb terrorist radicalisation, the police said while launching a new safeguarding website called ACT Early to tackle the problem.

“We are seeing more young people being drawn towards terrorist activity,” said Assistant Commissioner Neil Basu, the head of the UK’s Counter Terrorism Policing, who called this “a relatively new and worrying trend.”

As the CCP (Chinese Communist Party) virus, which caused the COVID-19 pandemic, makes it harder for young people to get help from schools, social workers, and mental health experts, counterterrorism police are concerned that people who need help are not getting it.

“What concerns me most is this—there has been a sharp increase in extremist material online in the last few years, and COVID-19 has meant that vulnerable people are spending a lot more time isolated and online, and with fewer of the protective factors that schooling, employment, friends and family can provide,” he said.

“In my opinion that is a perfect storm, one which we cannot predict and that we might be feeling the effects of for many years to come.”

The UK’s terrorism threat level was raised to “severe” on Nov. 3, meaning an attack is now judged to be “highly likely.”

It was a precaution following a spate of terrorist attacks in recent weeks in France and Austria, where eight people were killed in three separate incidents.

Most of the culprits in the terror attacks in Paris in November 2015, in which members of the ISIS terrorist group killed 130 people, were home-grown terrorists from Muslim communities in France and Belgium.