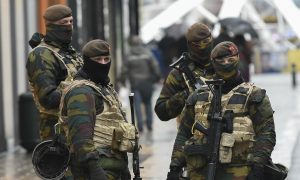 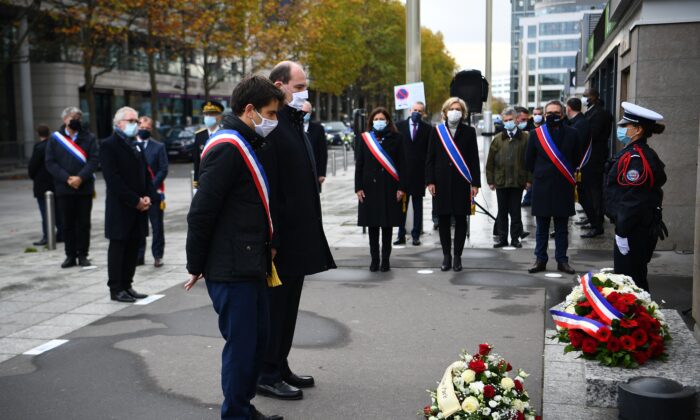 France is commemorating the fifth anniversary of the 2015 terrorist attacks in Paris on Friday, as the country is once again on the highest security alert against Islamic terrorism.

On the night of Nov. 13, 2015, three teams of suicide bombers and gunmen launched coordinated attacks on multiple targets in Paris, hitting bars, restaurants, the national stadium, and the Bataclan concert hall, leaving 130 people dead and hundreds more injured, in what became France’s deadliest ever peacetime attack.

The ISIS terrorist group claimed responsibility for the atrocities, saying that it was retaliation for French airstrikes on ISIS targets in Syria and Iraq.

French Prime Minister Jean Castex on Friday paid tribute to the victims of the attacks.

At the Stade de France, where the attack began with suicide blasts outside the stadium during a football match attended by then-President Francois Hollande, he laid a wreath of flowers at the foot of a wall.

The public could not join this year’s commemorations because of France’s partial lockdown due to the CCP virus pandemic.

France has suffered a series of Islamic terrorist attacks in recent weeks. On Oct. 29, a 21-year-old Tunisian man shouting “Allahu akbar” allegedly beheaded an elderly woman and killed two other people in a church in the southern French city of Nice.

On Oct. 16, French history teacher Samuel Paty was beheaded in broad daylight outside his school near Paris by a teenage Chechen refugee, after he used caricatures of Prophet Muhammad in a class on freedom of expression.

“We face a double-edged threat: from outside, people sent from abroad, and a grave internal threat, people who are amongst us, our enemies within. Those threats are increasing,” France’s Interior Minister Gerald Darmanin told franceinfo radio.

Most of the culprits in the November 2015 attack were home-grown terrorists from Muslim communities in France and Belgium.