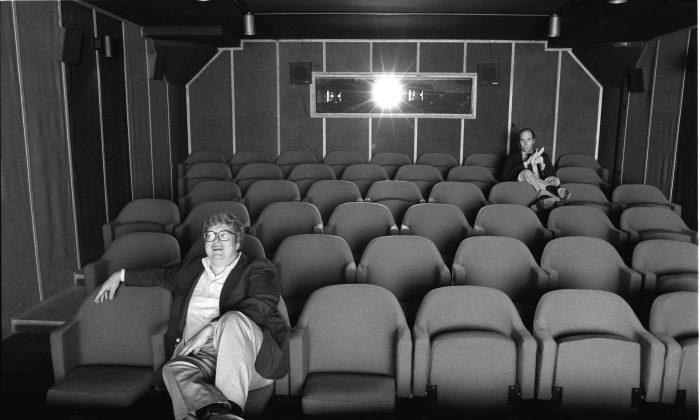 One Thumb Up For Roger Ebert Documentary ‘Life Itself’

Roger Ebert wrote 6,000 movie reviews. Wrote them in a blazing half-hour. Had an ego but could back it up. When asked, “Who are you, that you get to talk about it?” Ebert replied, “Would you want to listen to you?” He could speak about films for five hours, frame by frame.

It’ll be the definitive work on Ebert’s life, certainly. But for those expecting something as fun as Ebert’s famous movie-review show, be forewarned: “Life Itself” is not entertainment in that sense. Best viewed as somewhat of an ordeal to be endured in order to acquire the knowledge imparted, it unflinchingly documents his fight with cancer in arguably too much detail.

Young Roger felt a persistent need to write, became a sports writer at age 15, and eventually a general-assignment reporter for the Chicago Sun-Times.

When the Birmingham bombings went down, he was the voice of outrage. When an unfortunate ad/photo juxtaposition resulted in a visual of a musket pointed at JFK’s head, Ebert actually managed to stop the presses.

When he finally brought his critical eye to film criticism (at that time, a lowly role) he won a Pulitzer Prize.

Former bar buddies speak of Roger’s horrendous taste in women; how he’d hold court in bars after work, starring in the movie of his own life, with the “gold-diggers.” Years of pressure and drinking led directly (but not quickly) to Alcoholics Anonymous, where he met his wife Chaz, whose good humor and strength of character would pull them through the most trying times of their lives.

Naturally, the story of Roger Ebert is not complete without the inclusion of Gene Siskel, his crosstown rival at the Chicago Tribune, and co-host on the long-running PBS TV show “Siskel & Ebert Sneak Previews.”

Roger didn’t get caught up in ideologies. He was a populist at heart, and felt that everyone should be able to “get” movies. His mantra was that “it’s not what a movie is about, but how it is about it, that counts.”

Gene, on the other hand, was a former philosophy major at Yale and traveled with Hefner in the Bunny Jet, providing a convenient populist vs. Hollywood-elite conflict, right from the outset.

Their show offered little in-depth criticism, and the thumb-evaluation device was a little heavy-handed (pun intended), but when the cameras stopped rolling, Roger and Gene were still going at it. And conflict, in showbiz, is the key to anchoring attention.

Film companies went from helping, to hating, to fearing them, because “Two thumbs up” came to mean everything.

Roger Ebert and Gene Siskel grew to respect and love each other. Siskel died from a brain tumor in 1999.

Cancer of the jaw took Ebert’s voice, much of his jaw, and the ability to eat and drink. Much of “Life Itself” is of Ebert in the hospital.

A spine operation put him in a wheelchair. The remaining facial wreckage is a little nightmarish; the computerized voice a little creepy and cyborgian. The disturbing image remains in the mind’s eye days later.

However, in light of the fact that Ebert himself was never ashamed of how he looked—we shouldn’t let visuals bother us either. Wife Chaz observes that when she first met him, “Roger weighed 300 pounds. He didn’t care. That was sexy.”

When her husband lost his voice, Chaz told him that, for his fans, “It’s what you have to say—not how you say it.” Chaz marched on Washington with Dr. Martin Luther King. She fought for causes. She was Roger’s primary caregiver.

Roger Ebert introduced countless moviegoers to great film criticism. He had 800,000 followers on Twitter. He refined and elevated the role of the film critic. This reviewer, for one, bows down.