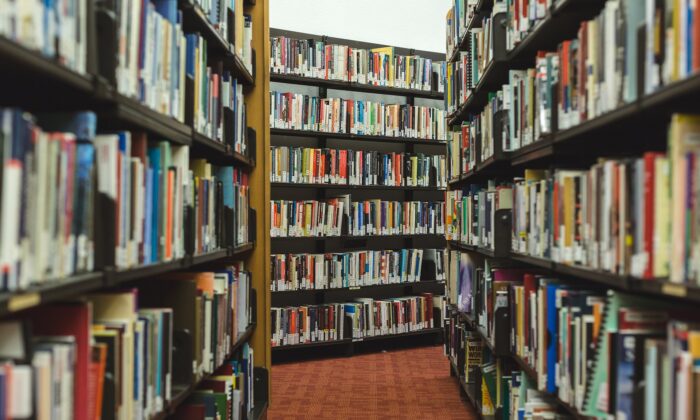 A photo illustration of a library. (StockSnap/Pixabay)
By Eva Fu

As a Chinese Olympics ski team was training at a Norwegian town, the team’s coaches and managers requested that a public library in Norway remove a book that was censored in China. The library refused, citing free speech.

The book is about Falun Gong, a Chinese spiritual discipline consisting of slow-moving exercises and moral teachings. As the practice grew in popularity, the Chinese regime feared it was a threat to its authority and launched a nationwide persecution campaign in 1999. Practitioners in China have faced arrests, torture, arbitrary sentencing, and forced labor since.

As the persecution began, books containing information about Falun Gong and its teachings were confiscated and burned. Today, the books are still banned in China, while the Chinese internet is full of state propaganda that defames the practice.

“We have freedom of speech in Norway, so that was completely out of the question,” Anne Marken, library manager in Meråker library, told local media Adresseavisen.

Over 40 Chinese cross-country skiing athletes, together with 15 coaches and managers were in Norway for training to prepare for the 2022 Winter Olympics in Beijing, according to the outlet. The program was a collaboration between the two countries to develop China’s winter sports, according to Chinese media.

Marken said that the delegation leaders asked the library three times to pull the book from shelves. They also made inquiries about removing two or three other books in their collection. The library did not specify the books’ titles.

“They have said that if any of the Chinese ski teams are caught with the banned books, they risk being sent to a labor camp or prison in China,” Marken said.

In response, Marken told the delegates that “the books in the library are open to them.”

“We cannot remove the contents of the library because of such requests,” she said.

Marken said that a few days after the first inquiry, they discovered that the book in question was rearranged on the bookshelf to appear hidden behind other books. On Dec. 18, library staff found several delegates filming the books on the shelves, bringing adverse reactions from library visitors.

The library has transferred Chinese-language books from Deichman, the largest public library in Norway, to accommodate the needs of the Chinese ski delegation, according to Norwegian news portal Norway Today.

The library told The Epoch Times in a Jan. 8 statement that public libraries are “responsible for providing a wide range of books and other information” in line with local laws and the freedom of speech guaranteed under the Norway constitution.

“Neither the state, regional or local authority may override the libraries’ choice of publications for their individual collections,” the joint statement with Trøndelag County Library  stated.

It added that doing so is necessary for the Norweigian public libraries to ensure “all people may find literature and information of their choice.”

Although it’s unclear whether the sports delegation received any directives from Beijing, “what is clear is that any country or organization that deals with Chinese delegations … will likely be subject to communist infringements on their freedoms,” Levi Browde, executive director of the Falun Dafa Information Center, told The Epoch Times. He said that the Chinese authorities have consistently pressured Western officials and groups to remain silent on the Falun Gong persecution in China.

“What this incident also makes painfully clear is that the Chinese regime’s persecution of the tens of millions of people inside China who practice Falun Gong remains among the most sensitive subjects for Chinese officials and a top priority to keep quiet,” Browde continued.

Bob Fu, president of human rights group China Aid, commented that what unfolded at the Norway library “certainly shows how arrogant these Chinese delegates are.”

“It is such an irony for the kind of fear for being seen with religious literature such as [Falun Gong] by these ‘official delegates,’” Fu told The Epoch Times, adding that the incident demonstrated “the Chinese regime’s total disregard to basic human rights and religious freedom.”

Minghui.org, a United States-based nonprofit dedicated to documenting the persecution of Falun Gong, has confirmed over 4,300 deaths as a result of the persecution campaign.

Keywords and homonyms related to Falun Gong, June 4 (referring to the bloody crackdown on the 1989 pro-democracy protests at Tiananmen Square), and Chinese leader Xi Jinping remain at the top of the regime’s online censorship blacklist, according to researchers.

The Chinese regime has also sought to export censorship overseas and silence voices critical of its leadership.

In October, a number of United States companies, including Apple, the National Basketball Association (NBA), and video game developer Blizzard, drew criticism for cowing to Chinese pressure by removing content related to, or silencing support for, the ongoing Hong Kong protests.

Also in the same month, Chinese authorities denied visas to a United States congressional group, after they refused to cancel a stopover in Taiwan. A United States representative criticized the regime’s act as “visa blackmail.” Beijing claims sovereignty over the island, despite it being a self-ruled democracy.

On Dec. 19, China called off two business delegation visits to Sweden, after the country’s culture minister presented a free speech award to Gui Minhai, a Chinese-born Swedish publisher, who is imprisoned in China. Gui ran a bookstore in Hong Kong that published titles critical of the Beijing leadership.

“The message is clear: when dealing with Chinese delegations, you will be pressured to follow the Chinese Communist Party,” Browde said.