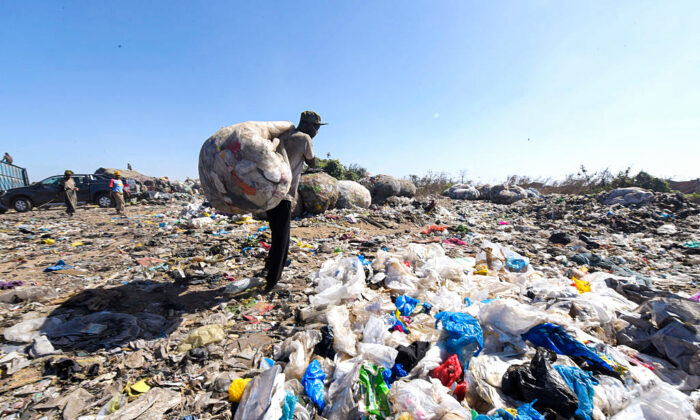 Plastic trash is dumped at the Mbeubeuss landfill on January 5, 2016 in Dakar, Senegal, where a new law prohibits the use of certain plastic bags. The implementation of the measure was launched on January 4, 2016 in Dakar in a campaign for a period of one week in an effort to clean up cities and raise awareness of the need to rid the environment of these pollutants. AFP PHOTO / SEYLLOU / AFP / SEYLLOU (Photo credit should read SEYLLOU/AFP/Getty Images)
Health & Safety

Calls plastics recycling 'more of a public relations scheme by the plastics industry than an actual waste management strategy.'
By Nathan Worcester

The medical nonprofit Environment and Human Health, Inc. (EHHI) has issued a research report outlining how plastics and microplastics may jeopardize both human health and the natural world.

Released Jan. 11, the report highlights a few staggering statistics on plastics use. Notably, the plastic generated every year weighs in at roughly 380 million metric tons, not much less than the total weight of every human being on the planet.

Microplastics, produced through the physical breakdown of larger plastics, are thus ubiquitous in our bodies and the wider environment: “There is no litter on the summit of Everest, but there are microplastics,” the report states.

Gaboury Benoit, an environmental chemist at Yale University and lead author of the report, told The Epoch Times that the focus on microplastics helps distinguish this report from a previous plastics report by EHHI.

“There’s been an explosion of research on this topic,” he said. “We also tried to put as much focus as possible on the human health aspects of the substances.”

An entire chapter, “The Health Effects of Microplastics,” describes the risks associated with microplastics, which the report says may cause deleterious effects ranging from oxidative stress to gut and lung injury to damage of the microbiome.

EHHI’s new release concludes with recommendations for the international community. These include advocacy of a potential international treaty on plastic pollution, which is set for discussion at the UN Environmental Assembly in February. The report also recommends tackling the plastic waste produced by China and other top polluters.

Benoit advises grocery shoppers to avoid single-use plastic and to reuse bags whenever possible. He suggests putting different kinds of produce in the same plastic bag rather than individually bagging them.

He and his coauthors also criticized plastics recycling, calling it “more of a public relations scheme by the plastics industry than an actual waste management strategy.”

Just 10 percent of plastic trash in the United States is ultimately recycled. Of that recycled trash, most falls into Types 1 or 2 of the seven Resin Identification Codes (RICs).

“If you absolutely have to use a plastic container, use one or two, but that’s not the solution,” Benoit said.

Although Benoit has concerns about plastics, he doesn’t think we’ll stop using them altogether any time soon.

“They have desirable properties that are almost irreplaceable in certain kinds of uses,” he said. “I think we can reduce it very substantially, even if we can’t—maybe even don’t want to—eliminate it entirely.”

Benoit and his coauthors underscored the need for research on smaller quantities of material with lengthier exposure periods. “This shift in approach will require increased research funding by federal agencies,” the report states.

“Scientists have a tendency to run their experiments at higher levels for shorter periods of time rather than being able to look at lower, perhaps more realistic concentrations over the very long time periods where effects might emerge,” Benoit said.

He also noted that BPA and other additives can make plastic products hazardous even when the underlying polymers are “relatively benign.”

Benoit told The Epoch Times that ethical concerns have limited the scope of plastics and microplastics research involving people: “It’s very difficult to do direct analysis of human health impacts, and so we have to rely on either animal models or cell cultures.”

These caveats notwithstanding, Benoit thinks that our understanding of the threat from microplastics is enough to spur action.

“I think the vast majority of people are not going to be happy about the notion that every time they eat or drink anything, and all the time that they’re breathing, these microplastics are getting into their bodies,” he said. “It may be true that we don’t yet know all the consequences of that. The question is, do people want to take that chance? I think the answer is, probably not.”

The Plastics Industry Association didn’t respond to a request for comment by press time.