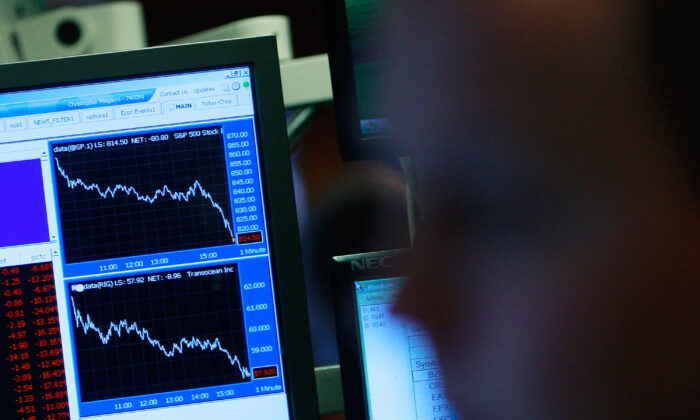 Traders work on the floor of the New York Stock Exchange moments before the closing bell, in New York City, on Dec. 1, 2008 in this file image. The Dow closed down nearly 680 points following negative economic reports. The National Bureau of Economic Research said today that the U.S. economy has been in a recession since December 2007. (Mario Tama/Getty Images)
Business Columnists

Much More of Much Less Demand

ADP wanted to get its employment numbers right, or as close to accurate as it could possibly reach. The payroll processing company had been maintaining its own set of labor estimates from all the way back to the start of the 21st century.

Unsatisfied with how the data performed over the last couple of unusual years, including some substantial benchmark revisions earlier this year, the statistical efforts were suspended for several months to give statisticians enough time to retool. Altering its methodology to take better advantage of the information at its fingertips, the idea was to relaunch a more reliable representation of the underlying economic fundamentals for employment.

On Aug. 31, ADP finally published the results and immediately stirred up doubts surrounding them. The new numbers display a very clear and material slowdown in hiring, the increase in private payrolls estimated for August 2022 just 132,000. That was the smallest monthly gain for the updated series since January 2021.

To ADP’s Chief Economist, Nela Richardson, this must represent confusion on the part of employers. In the press release accompanying the payroll figures, Richardson explained, “Our data [suggest] a shift toward a more conservative pace of hiring, possibly as companies try to decipher the economy’s conflicting signals.”

What if only economists are conflicted about companies actually seeing things very clearly?

According to all mainstream sources and economists, who all get their views from the Federal Reserve, what’s supposed to be going on is nothing more than a red-hot labor market being cooled off by the steady and skillful hand of policymakers wielding powerful rate hikes (and QT) tools. In fact, Richardson says so in the very next sentence:

“We could be at an inflection point, from super-charged job gains to something more normal.”

And that’s the “conflicting signals.” Not just falling down to +132,000 on the month, what’s most concerning is how quickly and when this downtrend has developed. Using ADP’s data, the labor market began to slow around April and May, and then a worrisome downside acceleration in July and now August.

It’s not conflicted to ask what’s next for September and beyond given this trend.

Even the government’s “other” labor market data, the Household Survey, has picked up on early recession-type behavior among employers dating back also to April.

That same (same, not similar) shift has been expressed in more than a few other places, in several additional yet crucial datapoints.

One I’ve pointed to before, and I’ll continue to refer to again, is the government’s (U.S. Energy Information Administration) estimates for how much gasoline is being supplied—therefore used—across the entire domestic economy. This means people driving to work, for pleasure, businesses delivering products, or service providers being transported for their services.

The EIA estimates are truly horrific. By their count, gasoline demand has sunk down below (on average) Summer 2020 levels. This is a straight-up five-alarm disaster (remember the economy of July or August 2020?).

While gasoline use is understandably a more extreme picture of demand being destroyed, total petroleum supplied is way down, too. And both series point to the moment when it all truly took shape—the March 2022 oil price spike.

S&P Global’s (formerly IHS Markit) Composite PMI is right there, too. The outfit’s services component crashed to 44.1 during August, causing the composite (which puts services together with manufacturing) index to fall all the way to 45.0. This index hasn’t been that low since before the summer of 2020.

Just as compelling is the timing of its decline. The composite had been 57.7, relatively decent, in, yes, March 2022. Since, the measure has seen a disturbingly steep drop that has brought it all the way down to levels only consistent with serious recent recessions (2020 and 2008–2009).

It’s enough implied recession-like demand destruction to explain what has reshaped the oil futures curve. This had been incredibly steep in backwardation until around the end of July given the massive global supply shortfall in crude (backwardation is when an undersupplied market rewards the immediate use of product, disincentivizing storage since current prices are much higher than futures contract prices further out in time).

Over the six or so weeks since, the WTI curve has flattened dramatically, nearly reaching front-end contango which, if or when it happens, would be a sign of demand falling off so much it will have grossly overtaken supply shortfalls as the market’s top worry.

These are, in market form, the equivalent of the sharp drop pictured by ADP’s data along with EIA’s gasoline and petroleum supplied numbers.

This is the problem with predetermined expectations. Anticipating a mild slowdown and instead getting 2020 levels of potential contraction, it seems to be too much of a disconnect, therefore too easy to just dismiss as “impossible” or “conflicting signals.”

Yet, there is a broad and growing catalog of evidence—in data and priced into markets—which unambiguously shows truly serious trouble for the economy here and abroad; today already and even more so projected for tomorrow.

Many, many economists are having a hard time conceiving how companies might quickly be shifting from reopening levels of hiring to much less and then, moving forward, perhaps outright cutting their payrolls as they find out demand therefore revenue is so rapidly drying up.

Stepping outside the mainstream box, it really isn’t that hard to imagine how the economy in a fragile place to begin with was then hit by $120 oil (eventually $5 gas) which just took it too far, punishing beleaguered consumers too much and therefore tipping the whole system (globally) right over the edge.

That edge is what we now see more clearly emerging in way too much data. We have been constantly told to expect nothing more than a helpful, benign slowdown to normalcy, not the steady emergency of at best recession, perhaps more than likely an increasingly nasty one.