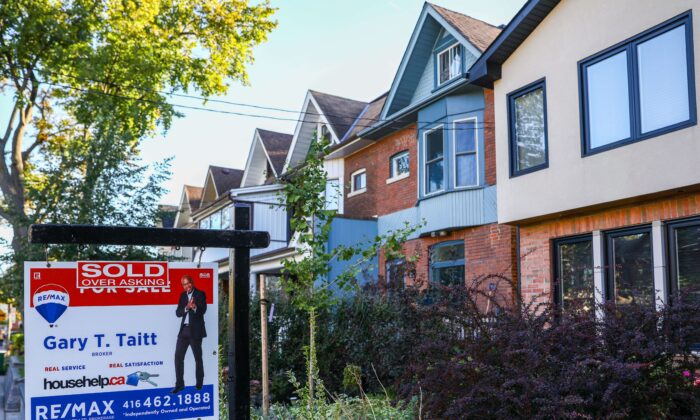 A sold sign in front of a Toronto home in a file photo. Mortgage rates are being kept high as the big banks play defence ahead of a potential recession. (The Canadian Press/Evan Buhler)
Canada

Canada’s big banks dominate the mortgage market and aren’t helping homebuyers and housing affordability with lower mortgage rates for the time being. Analysts point to the banking oligopoly in Canada as a major factor in the lack of competitive options for consumers as compared with the United States.

Like other industries, the big banks are facing their share of challenges as recession fears grow, but the current high rates in the Canadian mortgage market are unwarranted, says Rob McLister, mortgage expert and editor of MortgageLogic.news.

“In Canada, we’ve seen over a 100-basis-point [1 percentage point] drop from the peak in June, and not one big-six bank has budged on 5-year fixed [mortgage] rates. It’s just shocking,” he told The Epoch Times, referring to the 5-year government bond yield that has plunged from about 3.6 percent in mid-June to just over 2.6 percent at the end of July.

The decline resulted from the financial markets adjusting for a potential recession and expecting central banks to cut interest rates eventually.

The 5-year bond yield is a key determinant for the mortgage market in Canada, as the 5-year term is the most popular with fixed-rate mortgages, which are far more common than variable-rate mortgages.

However, despite the fall in bond yield, the best 5-year mortgage rate has continued its steady climb since early June—from 3.6 percent to 4.35 percent in late July—according to data from mortgage site RateHub.ca.

The disparity is even more egregious with the big banks in Canada, as McLister points out that the spread between their typical discretionary 5-year fixed mortgage rate and the 5-year bond yield has ballooned to about 250 basis points, or 2.5 percentage points.

“That is an absolutely massive, massive gap. And there’s really nothing in the market that would warrant such a wide gap even knowing that we’re going to have a potential recession,” said McLister.

In contrast, the United States has seen similar yield declines in its bond markets but mortgage rates there are coming down instead of continuing to climb.

“And you’re telling me that the risk profile in Canada is so dramatically different than that in the U.S.? I don’t think so,” McLister said.

Canada’s mortgage market operates at the mercy of the big banks. Smaller lenders typically depend on the big banks for financing in order to lend.

“The banks are big players in Canada. They’re oligopolies. … They have the most money. … But that doesn’t mean you can’t find deals at other lenders,” McLister said, adding that “once one of the majors cuts fixed rates, most of the rest should fall in line.”

In the United States, mortgage rates have dropped significantly since hitting a high in mid-June. The popular 30-year fixed mortgage rate hit a high of 5.81 percent in mid-June but has since fallen to 5.30 percent at the end of July, based on data from Freddie Mac.

“It is just shocking how fast the market adjusts to lower yields,” McLister says, referring to the U.S. mortgage market.

If the 10-year bond yield drops by say 10 basis points, McLister says he’d see a bunch of rate updates from a whole slew of lenders on their 30-year fixed-rate mortgages.

Banks aren’t compelled to drop their rates for now but are trying to maintain profit margins on mortgages and not keen on growing their mortgage businesses, McLister says.

He adds that banks are, in part, also expecting to have to set aside more money to cover losses on mortgages and other loans as the likelihood of a recession mounts.

It’s also getting more expensive for banks to obtain longer-term funding due to the growing extra premium—or credit spread—they need to pay investors as compensation for higher risk, given the concerns about a potential recession, McLister says.

This is a notable pivot for the big banks, which had been growing their mortgage businesses in the three months that ended April 30.

A rising interest rate environment, in theory, should be good for banks, which profit from lending at higher rates for longer terms and borrowing at lower rates for shorter terms. They earn the differential or net interest margin.

But when longer-term rates are lower than short-term rates—as they are now—bank lending tends to slow. The phenomenon—known as an inverted yield curve—has an uncanny ability to signal an upcoming economic recession.

As of the end of July, the banking sector on the Toronto Stock Exchange was down 10.3 percent year-to-date, which is worse than the overall index—down 7.2 percent. It’s a similar situation with the banking sector of the S&P 500, though the declines there are worse.

And with higher rates, mortgages are harder to obtain given that the mortgage stress test requires borrowers to qualify for a rate 2 percentage points higher than the offered mortgage rate.

As Banks Go, So Goes the Economy

U.S. banks and Canadian banks face a similar obstacle of whether their borrowers can pay their loans amid high inflation.

According to the U.S. Federal Reserve’s July opinion survey of senior loan officers, U.S. banks are expected to tighten their lending standards for all types of loans.

“A tightening of lending terms for businesses and consumers will constrain consumer spending and business investment as the economy slows, at least at the margin,” said Nancy Vanden Houten, US lead economist with Oxford Economics in an Aug. 1 note.

The flow of bank credit is vital for a growing economy, but it is thus expected to dampen.

Canadian banks are also essentially discouraging people from putting money in their savings accounts, as the interest rates offered are still extremely low even though inflation is above 8 percent. This behaviour is inconsistent with history, as savings accounts typically paid more than inflation when prices were rising rapidly.

Claire Celerier, a University of Toronto finance professor, told The Canadian Press that part of the problem is the concentration in the banking sector and that with less competition, the banks can be slower in adjusting rates.

Banks are flush with deposits as Canadians’ savings swelled during the pandemic.