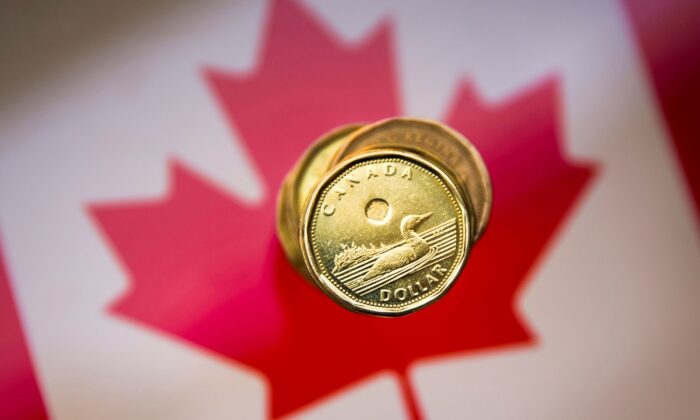 Analysts predict that the Canadian dollar will depreciate as global recession fears mount, even as oil prices could climb further and the Bank of Canada continues hiking interest rates. (Mark Blinch/Reuters)
Markets

High oil prices not generating the investment seen in the past thus loonie lags, says strategist
By Rahul Vaidyanath

The Canadian dollar’s failure to appreciate in tandem with oil has thrown a wrench into the Bank of Canada’s plans in its fight against inflation amid its claims that the economy will side-step a recession. Moreover, analysts see the loonie weakening and crude prices still benefiting from impediments to higher global supply—a combination that could lead to more inflation.

Currency markets have been weighing in on global recession fears, underlined by broad strength in the U.S. dollar. And since early June, the Canadian dollar has been drifting lower similar to the price of oil—a return to greater correlation.

On July 14, the Canadian dollar got caught up in a “panic moment for financial markets,” as Anderson puts it. The loonie plunged below US$0.76, although it has since rebounded to above US$0.77.

That day also saw a dramatic plunge in crude, as West Texas Intermediate (WTI) hit one of its lowest levels since the Russian invasion of Ukraine—below US$97 per barrel.

He added that if the Canadian dollar stayed below US$0.76 for a few weeks, that would probably indicate a greater likelihood of a global recession.

Anderson sees the loonie bottoming out at around US$0.75.

The lack of correlation between oil prices and the loonie can be explained by how, as the price of oil has been increasing, it hasn’t been generating the foreign direct investment in the oilpatch like it used to prior to 2014, Anderson pointed out.

Instead, oil companies are paying down debt and distributing bigger dividends to shareholders, and Canada is not generating the economic growth and productivity it used to from higher crude prices.

“In the past, a strong correlation existed between oil prices and the Canadian dollar: As oil prices rose, the dollar appreciated. This helped offset the inflationary impact of higher energy prices by making imports into Canada cheaper. But recently, this relationship has not held, which means that higher oil prices have had an even greater effect on inflation,” the BoC said in its monetary policy report.

Thus, a relatively weaker Canadian dollar—all else being equal—would continue to give a boost to inflation as the prices of imports would rise. Adding higher oil prices on top of that would push inflation even higher.

“We are entering a difficult phase for the CAD [Canadian dollar] with the state of oil and risk sentiment,” TD Securities said on July 14 in a note to clients.

Adam Button, chief currency analyst at Forexlive, said in an interview with BNN Bloomberg on July 18 that he expects the loonie to trend down to US$0.73 toward the end of the year before bottoming due to the global growth picture deteriorating.

But his message wasn’t all doom and gloom.

“There are things working for Canada, like energy,” he said, adding that Canada has an “incredible opportunity” to supply the world with natural resources if it can get its regulatory framework sorted out.

However, the loonie is also sensitive to global recessionary forces like more lockdowns in China and a dramatic slowdown in Europe, Button added.

BMO senior economist Art Woo said in a July 15 note to clients that while short-term risks to the price of oil have shifted to the downside due to intensifying global recession fears, “the longer-term risks are skewed to the upside as the recovery in global oil supply appears to be under greater threat than demand.”

But Button says that even if oil gets back to US$130, that won’t necessarily save Canada’s economy given the impending housing market slowdown.

Many financial markets observers have noted that the U.S. 10-year bond yield has dropped below the 2-year bond yield—a phenomenon known as an inverted yield curve, as investors expect short-term rates to fall in the future, typically due to an upcoming economic downturn. And the inversion is quite significant as it’s the largest since October 2000, which presaged the 2001 recession.

Furthermore, after the Bank of Canada raised rates by 100 basis points on July 13, the Canadian yield curve soon inverted noticeably.

Anderson says he is less concerned about the 10-year yield being lower than the 2-year yield, but if the 10-year yield was below the interest rate for a 3-month Treasury bill, then that would be a more reliable predictor for a recession.

“That one could invert by the end of this year. I could see that happening,” he said about U.S. interest rates.

At least in Canada, there’s still about half a percentage point difference between the yields of the 3-month Treasury bill and the 10-year bond.

But if the United States enters into a recession, analysts including Anderson say Canada will be dragged down along with it.