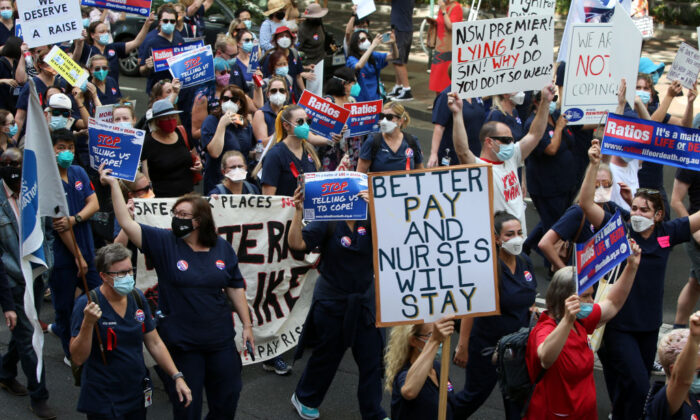 Following months of industrial action by unions across industries, including health, education, and transport, the secretary of the peak union body in the Australia state of New South Wales (NSW) said more action was to follow until their wage demands were met.

“For as long as the wage cap ­remains in place there will be strikes. They will happen next week, next month, and the month after that,” Morey told The Daily Telegraph on Feb. 21.

The comments came the same day that the entire Sydney passenger train network shut down after the transport union and state government failed to reach a resolution. Trains resumed operations on a limited timetable on Tuesday with further delays expected on Wednesday.

One week prior, on Feb. 15, 5,000 nurses walked off the job over staffing issues and wages, followed by a paramedic strike on Feb. 17.

The Rail, Tram, and Bus Union (RTBU), NSW Nurses and Midwives’ Association (NSWNMA), NSW Teachers Federation (NSWTF), and more unions are demanding a wage increase of at least 2.5 percent and other job-specific requirements.

However, according to the state’s industrial relations law, a 2.5 percent annual wages increase is the cap for public servants.

“No one relishes going on strike. But these workers … have little alternative,” Morey said. “Everything is going up except their pay and they have no capacity to bargain for higher wages.”

NSWTF have decided to hold off industrial action, giving the NSW state government one month to resolve its issues around salaries and workload. The teachers’ union also had over 15,000 teachers strike in December, demanding a wage increase of five to 7.5 percent.

“Of course, [Premier] Dominic Perrottet and [Treasurer] Matt Kean can end all of this very quickly by allowing nurses, paramedics, teachers, and other pandemic heroes to bargain for a fair wage rise,” Morey said.

The NSW state government has alleged Labor has teamed up with the unions to mount an attack on the Liberal-National coalition.

“This is the unions playing games with the Labor Party for political purposes at the expense of our people,” Perrottet said on Monday.

Federal Treasurer Josh Frydenberg called it “threatening behaviour” by the unions and a sign of what was to come if Labor is elected into parliament.

Prime Minister Scott Morrison said if industrial action that fell into federal responsibility occurred, a strong stance would be taken, similar to when he warned the Maritime Union of Australia of intervening in port strikes if necessary.

“The unions are ramping up, there’s no doubt about that, and it’s a poor taste of what they could expect, I suspect, with with licence from Labor,” Morrison told 2GB radio.

Morrison also pointed to the manufacturing union for protesting against the AUKUS alliance in early February and warned that a Labor government would “hand the country over to the unions.”

“Under a Labor government led by the most left-wing Labor leader in 50 years since Gough Whitlam, … then this is what they can expect,” he told reporters. “Weakness cannot stand up to that sort of intimidation by unions.”