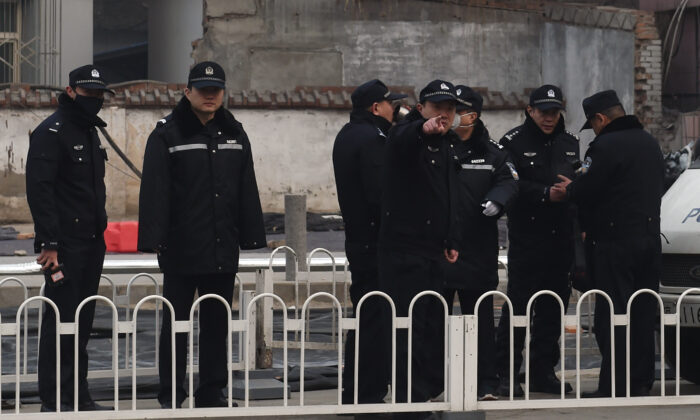 Police officers stand guard outside the No. 2 Intermediate People's Court where human rights lawyer Pu Zhiqiang was being sentenced in Beijing on Dec. 22, 2015. (Greg Baker/AFP via Getty Images)
Chinese Regime

The Chinese communist regime has placed Fu Zhenghua, a longtime official in China’s public security sector, under investigation. While the regime hasn’t disclosed details of the investigation, Fu is known to have committed human rights violations for years.

The Central Commission for Discipline Inspection, a party organ for policing corruption, issued a short statement on Oct. 2, saying that Fu was suspected of “serious violations of discipline and the law”—an oft-used euphemism by the Chinese Communist Party (CCP) to mean corruption. The commission didn’t provide further details.

Fu, 66, became the Chinese justice minister in March 2018 before stepping down in April 2020. Since then, he has been a deputy director of the Committee for Social and Legal Affairs in the Chinese People’s Political Consultative Conference (CPPCC), a political advisory body.

His career in China’s public security sector began in 2010, when he was named head of the Beijing Municipal Public Security Bureau. Three years later, he took on two additional positions—a deputy minister of China’s Ministry of Public Security and a member of the regime’s top legal body, the Central Political and Legal Affairs Commission (PLAC).

He would continue to have a position at both the ministry and the commission until mid-2016.

While Fu’s case is still pending further investigation, many CCP officials have been purged since 2012, when Chinese leader Xi Jinping began a relentless anti-corruption campaign. Since then, more than 100 “tigers and flies”—CCP jargon for high- and low-ranking officials—have been purged for corruption crimes such as bribery and embezzlement. However, the regime has steered away from looking into how these officials may have also committed human rights violations.

Zhou Yongkang, who formerly headed the PLAC, was sentenced to life imprisonment in 2015. According to China’s state-run media, Zhou was guilty of abusing his power, among other things, but there was no mention of his involvement in human rights abuses.

Fu has been named by the World Organization to Investigate the Persecution of Falun Gong (WOIPFG), a U.S.-based nonprofit organization, for his crimes against Falun Gong adherents, as well as being one of the CCP officials responsible for China’s massive suppression of lawyers in 2015.

On July 9, 2015, the Chinese regime rounded up hundreds of lawyers and activists across China in a clampdown commonly known as the “709 Incident.” Some remain in prison or detention, such as human rights lawyers Yu Wensheng and Chang Weiping.

According to data from Minghui.org, a U.S.-based website that monitors the persecution of the faith group, hundreds of Falun Gong adherents living in Beijing were kidnapped, and more than 60 were sent to labor camps between 2012 and 2015, when Fu was the Beijing Municipal Public Security chief. More than a dozen adherents died, among them Li Yuejin.

Li was taken by police officers from the municipal security bureau in Beijing and other local police stations in August 2012, according to Minghui.org. He was subsequently sent to a labor camp, where he was persecuted for refusing to renounce his beliefs.

One day at the labor camp, Li was forcibly given a shot of an unknown substance that caused him great discomfort. According to Minghui, the injection was determined to be the cause of his death in October 2013, months after he was granted medical parole due to his poor health.

Millions of Falun Gong adherents in China have been detained inside prisons, labor camps, and other facilities in China, with hundreds of thousands tortured while incarcerated, since July 1999, when former Chinese leader Jiang Zemin launched the persecution, according to the Falun Dafa Information Center.

In the first six months of 2021, at least 674 Falun Gong adherents were illegally sentenced, with the longest sentence being 14 years.