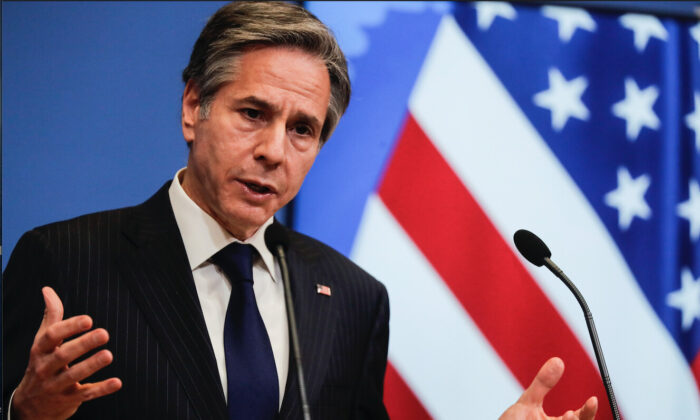 July 9 marked the start of Beijing’s mass persecution directed at China’s human rights lawyers in 2015, called the “709 crackdown.” On its sixth anniversary, U.S. Secretary of State Antony J. Blinken vowed that the United States will always buttress them to build a more just, stable, and prosperous Chinese society.

The persecution targeted hundreds of human rights lawyers, dissidents, and their families across China’s 23 provinces. These voices for justice were subjected to torture, televised confessions, mass state-sanctioned kidnapping where targets are held incommunicado and likely tortured in the communist party’s “black jails”—a practice euphemistically called “Residential Surveillance at a Designated Location”—and other forms of mistreatment. The 709 action is widely viewed as a judicial leap backward for China.

In a July 8 statement, Blinken honored the Chinese lawyers and human rights defenders who have been unjustly detained, interrogated, and imprisoned by authorities of the Chinese Communist Party since July 9, 2015. He called on Beijing “to release those who have been detained or imprisoned in connection with the ‘709 crackdown’ to ensure their family members are free of harassment, and to reinstate the lawyers who were disbarred.”

On the 6th anniversary of the #709crackdown, the Chairs call for the release of all human rights lawyers and rights defenders and again urge @UN Secretary-General @AntonioGuterres to take decisive actions to address horrific human rights abuses in China. https://t.co/rcFSZdMHr7 pic.twitter.com/S2bSqRG2qa

“Through arbitrary detentions, torture, revocation of legal licenses, and threats, the Chinese government has tried to choke off independent representation for Chinese citizens facing politically motivated prosecutions. The unconditional release of human rights lawyers is of critical interest to the United States and the international community. The legal profession is a pillar of the rule of law, without which China’s obligations under international covenants and treaties are but empty words,” the commission chair and co-chair said in a statement.

“On the anniversary of the crackdown on human rights lawyers and rights defenders in China, the Chairs call for the immediate release of all detained lawyers, including Zhou Shifeng, Yu Wensheng, Li Yuhan, Xia Lin, Ding Jiaxi, Qin Yongpei, and Chang Weiping and for these cases to be raised by the United States and at the United Nations. The Chairs further call for renewed diplomatic efforts to seek information on the status of Gao Zhisheng—arbitrarily detained, tortured, and missing since August 2017.”

Wang Yu was the first lawyer to be illegally detained by the campaign in the early hours of July 9, 2015. Her husband and her then 15-year-old son were also arrested on the same day. Wang was then tortured and forced to perform a televised confession when police threatened her son to intimidate her.

Wang was then imprisoned for more than a year and then put under house arrest for over a year, before being released in August 2018. In a 2019 interview with The Epoch Times, Wang described the various torture methods inflicted on her in prison.

In the interview, Wang also expressed her heartfelt thanks to all supporters—domestic and international—for their attention to the persecution suffered by China’s human rights lawyers under the regime’s campaign.

Wang had acted on behalf of China’s vulnerable groups in numerous cases, including those impacted by the persecution of Falun Gong—a traditional Chinese meditation discipline that promotes the values truthfulness, compassion, and tolerance.

In June 2015, Wang proclaimed her support to China’s Falun Gong adherents who had filed lawsuits with the supreme court against Jiang Zemin, then-Chinese leader, on a charge of genocide against the Falun Gong population.

On Nov. 26, 2020, she was disbarred by the Beijing Municipality Bureau of Justice.

In March, Wang’s efforts to advocate for human rights in China gained further recognition when she received an “International Women of Courage Award” from the United States government.

Many Still in Prison

In his statement, Blinken mentioned the names of four lawyers, including Xu Zhiyong, Ding Jiaxi, Li Yuhan, and Yu Wensheng, who are being detained or imprisoned.

Yu’s wife, Xu Yan, told The Epoch Times that the persecution by Chinese authorities on the country’s lawyers has been brutal in the past six years and is continuing. As a result of the “709 crackdown,” some lawyers have been disbarred, effectively destroying their careers after their release.

She added that currently, her husband’s health is deteriorating in prison. He had developed a shaky right hand, which is too weak to write, to brush his teeth, or hold chopsticks at dinner, as well as high blood pressure and kidney stones.

“In my mind, he’s always innocent,” Xu Yan told The Epoch Times. “That’s why I’ve clung to redress-seeking efforts despite many occasions of mistreatment.”

Xu Yan is not alone in supporting her imprisoned husband.

After many of China’s human rights lawyers were thrown into detention centers, their wives across the country sprang into action, including Wang Qiaoling, Li Wenzu, and Yuan Shanshan.

This small circle of wives united to petition the judicial authorities. They visited detention facilities, police stations, and courts, and launched protests demanding the government recognize their spouses’ legal rights and release their husbands.

Wang Qiaoling, the wife of rights lawyer Li Heping, told The Epoch Times that the impact of the “709 crackdown” on her family was huge, especially on her husband’s physical and mental health while she suffered a lot as well as his spouse.

She revealed that the family faced strict restrictions even after Li’s release, including their child’s school life and Li’s travel.

She said she has been able to get through the difficulty with family support and from confronting her challenges in a positive manner. In the process, she has also met other women facing a similar situation with whom she has forged great friendships.

“We’re proud of the past when we were together in the fight for just treatment,” Wang said. Being in the same boat, she said the women have encouraged each other to stay positive.

“We believe the world is governed with justice by God, not by a certain single person,” she said. “That’s the source of where our confidence comes from. So, it’s our firm belief that our loved ones will come back.”

Chinese human rights lawyers continue to play their different roles even though many of them have been disbarred, face travel restrictions, or struggle to make a living.

Xie Yanyi was among the imprisoned lawyers during the “709 crackdown.” On July 12, 2015, he was detained by communist party authorities. Later, he was transferred to different locations, including two unidentified facilities and the Tianjin No. 2 Detention Center, where he was not allowed to use his real name, according to his account. He was subjected to grueling interrogations, beatings, prolonged punitive sitting, and intimidation. He was released on Jan. 18, 2017.

Xie said in an interview with The Epoch Times that the past six years have proven to him that any tyranny, evil, or injustice is doomed to failure. He believes that the power of the awakening Chinese people is unstoppable, and that dictatorships will never be able to beat citizens’ pursuit of freedom, dignity, and justice.

“A democratic China pursuing the supremacy of human rights and rule of law represents the common interests and welfare of all of us and our future generations, regardless of personal social status,” the lawyer said.

Hong Ning and Ling Yun contributed to this report.