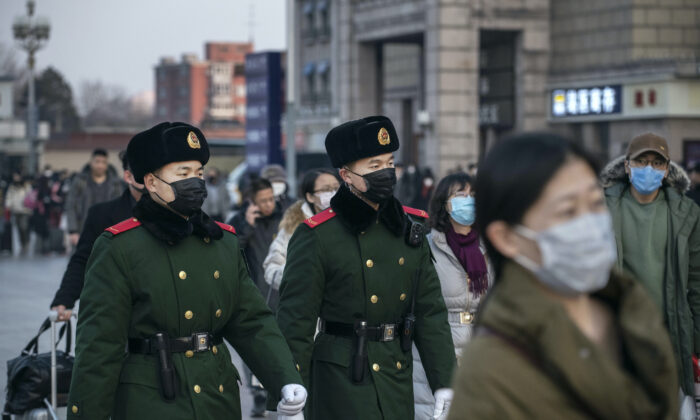 The Chinese communist regime is expanding its use of a system that is tantamount to “mass state-sanctioned kidnapping” to terrorize and silence people, including foreigners, according to a recent report (pdf) by human rights group Safeguard Defenders.

The secretive system, a legalized form of black jails, has been running since 2013 and has targeted a minimum of 27,208 victims as of June 1, the report (pdf) stated, based on China’s publicly available court data. However, the report added that the actual number of victims could be more than 56,900, based on its estimates.

Officially known as “Residential Surveillance at a Designated Location” (RSDL), the system is an extra-judicial measure that allows Chinese police to make people “disappear” without a court order.

“The whole RSDL system is disturbing in every aspect, from the way victims are black-hooded and kidnapped, taken to a secret location, and kept there incommunicado for 6 months, sometimes more, to be tortured and threatened,” Dinah Gardner, author of the report, told The Epoch Times in an email.

“However, some victims have said that while the entire experience is intensely traumatic, the single most terrible part of RSDL was when police threatened their family and other loved ones.”

The system is run by police officers from China’s ministries of public security and state security, and they have “the powers to act with virtually no oversight,” including to arbitrarily detain, torture, and coerce confessions from their victims, according to the report.

The report collected accounts from people who had been subjected to RSDL to put together an in-depth insight into how the system works. Among the former victims were Peter Dahlin, director of the Madrid-based nonprofit, several Chinese human rights lawyers including Wang Yu, and American professional basketball player Jeff Harper.

The Chinese Communist Party (CCP) also subjects individuals to the system as part of its “hostage diplomacy” according to the report. Two well-known victims are Michael Kovrig and Michael Spavor, two Canadians who have been arbitrarily detained in China since December 2018.

Harper, a former Iowa Wesleyan University basketball player, was held in isolation at an apartment complex in the southern Chinese city of Shenzhen for eight months before he was released in September 2020. He was detained and accused of causing a man’s death following an altercation.

He was quoted as saying that he sometimes ate rice with bugs in it and he lost 40 pounds during his solitary confinement. He stated: “I would just sit around all day and do push-ups and work out. Stare out the window and look at the airplanes go by and hoping that this day would pass.

“I had one form of entertainment. It was a big rat crawling from wire to wire between the buildings. I watched this rat every day.”

Wang, one of China’s most prominent human rights lawyers, was detained in 2015 amid a nationwide round-up of hundreds of lawyers and rights activists across China. She has since been released and won the 2021 International Women of Courage Award granted by the U.S. State Department.

“I was forced to stay inside the small, painted square during the day, suffering at the hands of these young girls [guarding me],” Wang was quoted as saying in the report. “If my leg or a foot were out of the square, even by just a tiny bit, they would warn me or slap me.”

In a 2019 interview with The Epoch Times, Wang said she was subjected to various tortures while being detained, including sleep deprivation, wearing heavy handcuffs and shackles, and sitting on a torture device called a “tiger bench.”

The report also included two English-language documents provided by former RSDL detainees. One document states several rules under residential surveillance, including “Sleep on your back and keep both arms above the blankets at all times” and “take all medicine that is prescribed.”

The report states that some detainees have been forced to take unknown drugs, making their minds dull, visions blurred, and muscles hurt, among other effects.

In the second document, terms of release are outlined, prohibiting subjects to expose what they’ve gone through by either writing on the internet, talking to the media, or meeting with foreign diplomatic officials.

The number of RSDL cases is on the rise. According to the report, there were 5,810 cases in 2020, based on China’s court database, an increase of 91 percent from 2019. The upward trend has continued into 2021 based on early data, Dahlin said in an email to The Epoch Times.

“We don’t know for sure why the dramatic surge in RSDL in 2020,” Dahlin wrote. “One early thought of course is that due to COVID-19 restrictions, RSDL has become preferable by local police to use, as it limits exposure to both detainee and police.

“At the same time, 2020 saw a dramatic increase in the need for information control, i.e., to silence those that speak ‘out of turns,’ especially about the virus spread and management, so that could also explain part of the increase.”

Last year, the Chinese regime went after citizen journalists who reported on the ground about outbreaks of the CCP virus, commonly known as the novel coronavirus. For example, Zhang Zhan was sentenced to four years in prison in December, while others, such as Fang Bin, have gone missing since being detained.

To avoid being ensnared in the system, Gardner stated that governments can protect their citizens by telling them not to travel to China.

Currently, the State Department’s travel advisory on China warns U.S. citizens that they could be detained by Chinese authorities “without access to U.S. consular services or information about their alleged crime.”