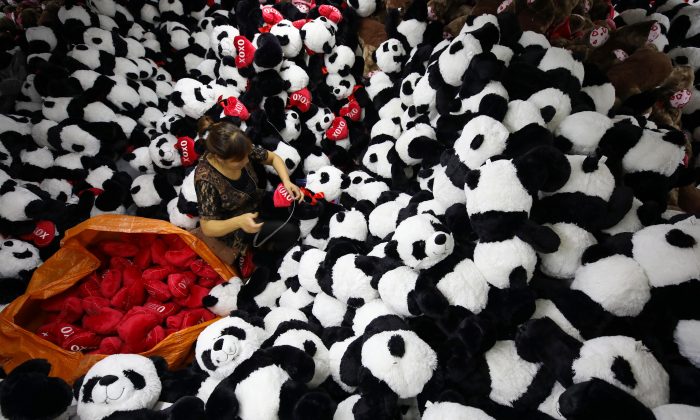 A Chinese worker makes stuffed panda toys for export at a toy factory in Lianyungang, Jiangsu Province on Oct. 9, 2017. A recent survey placed China at the bottom of a “Made-in-Country Index.” (STR/AFP/Getty Images)
Social Issues

Perhaps it doesn’t come as a shock when an international survey shows that the “Made in China” label does not generate the highest consumer confidence. However, when the product tag from the Middle Kingdom fell behind that of Bangladesh, the news generated a lot of anger on Chinese social media. For some, they couldn’t agree more with the low ranking.

The survey, carried out by German-based data provider Statista, asked 43,034 people in 52 countries about their perception of products made in three countries, giving a total of 129,102 assessments, with each country assessed by at least 2,500 people. The resulting Made-in-Country-Index (MICI) ranked Germany first, followed by Switzerland and the European Union. While the United States came in at eighth, tied with Japan and France, China came in at 49th.

Survey participants perceived products from Germany to possess high quality and high-security standards, while Japanese products were mostly associated with advanced technology. As for products made in China, they were connected to a very good price-performance ratio.

On China’s social media, many netizens reacted with outrage—some accused the survey of being Western propaganda with fake data, while others suggested that Western research institutions were not very trustworthy.

Quite a few netizens, however, voiced their approval of the low ranking by pointing out problems in China, on the comment section of the Chinese news portal Sina.

“Even gutter oil and dead pork cannot be contained. It is lucky to even make the ranking,” wrote a netizen with the moniker “Duan Shu An” from Hebei Province.

Another netizen from Hubei Province wrote, “This country is built on knockoff products. And there is not much to complain about when there are so few recognizable [Chinese] brands … People making fake products are becoming so rich, and those with some integrity in running their businesses are on the brink of bankruptcy.”

For years, China has been plagued by food problems: “mutton meat” made from rats, expired meat in McDonald’s burgers, plastic rice, and gel-injected shrimps, to provide a few examples.

The lack of trust with domestic products has led many Chinese to scoop up everything—from baby formula to toilet seats, and rice cookers to diapers—when they travel abroad. The low confidence in locally-made products has also slowed down the Chinese economy.

But in one incident, fake products turned out to be a life-saver. In March 2016, a man from Shandong Province tried to kill himself by swallowing over 200 sleeping pills. However, he woke up after a short sleep—a hospital visit afterward confirmed that the pills he had taken were fake.