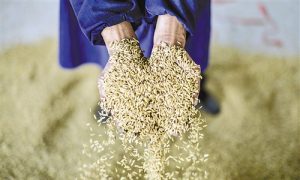 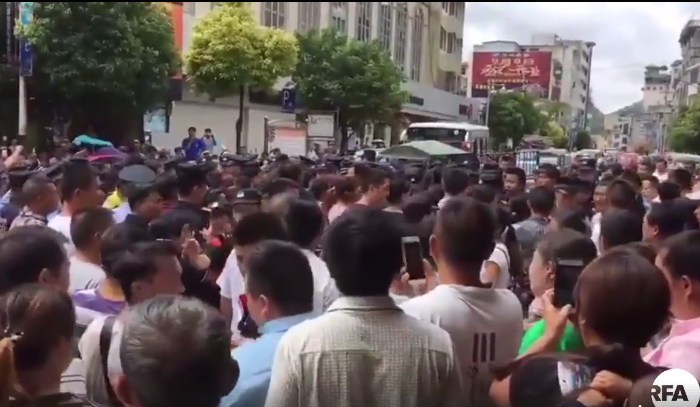 Thousands of students' parents in Guizhou's Anlong County took to the streets on September 5, 2017, after finding rotten meat delivered to the school cafeteria. (Screenshot via RFA)
China

It would have been another normal Tuesday morning on Sept. 5, as parents of Xifeng No. 2 Primary School pupils in Guizhou Province sent their kids off to school. At the school gate, the parents were surprised to find a dubious truck loaded with boxes of pork. The meat—partially rotted with some pieces covered with patches of mold or worms—gave off a repulsive stench.

The parents’ amazement turned into outrage when they realized that the meat was not going to the landfill for disposal but to the school kitchen, soon to be fed to their children.

Instead of going to work like they normally did, the furious parents staged a mass street protest. The number soon proliferated to thousands as more indignant locals and parents joined the march. Officials from the local market supervision bureau attempted to seal off and seize the boxes, but were blocked by the parents.

“Word spread quickly from mouth to mouth,” a parent surnamed Li told The Epoch Times. “The government wanted to take the pork boxes away and turn the issue into naught.” Li observed about 2,000 to 3,000 participants on the street.

To show what their children might have been eating, the protesters carried the boxes of pork and paraded on the street. They were confronted by a large but unspecified number of police, and a few protesters were arrested.

“From the No. 1 primary to No. 2 and No. 5, our schools are all on the streets, pretty much walking on any road can take you through the whole town, so you bump into demonstrators wherever you go,” Li said.

The demonstrators marched from school and stopped in front of the local government building. They dispersed after the police chief came to meet them and promised to solve the issue. They might plan for larger-scale protests if the authorities don’t settle it properly, the parents said.

The market supervision bureau staff member who picked up a reporter’s call refused to answer questions, stating that the issue was “under investigation.”

The protest was a culmination of long-building dissatisfaction toward the government-monopolized school canteen. The parents said that Chia Tai Group (also known internationally as Charoen Pokphand or CP Group) that supplied the questionable pork had made a pact with the local government to become the exclusive supplier for the dozens of schools in Anlong County of Guizhou, a mountainous province in southwestern China. It has supplied food to tens of thousands of primary and middle school students who dined in the school cafeterias for over a year.

The incident has not been the first time the CP Group fell under public scrutiny for the quality of the food it supplied. The parents mentioned a small-scale food-poisoning incident last year when a few students fell ill after eating the cafeteria food, and said they dropped the matter for lack of awareness of their rights. They hoped that the government could suspend supplies from CP.

“We hope that the government could give schools the freedom to choose where to purchase their own food materials…wouldn’t it be much fresher that way? There’s tens of thousands of students, how do you make a ‘unified distribution’ when you don’t even have insulation in the truck? ” a parent surnamed Zheng told Sound of Hope Radio.

The Thailand-based conglomerate CP Group made its first entry to China in 1979 as the first foreign investor when China opened up trade to the outside in 1978. It has since sprouted to over 200 subsidiaries across the country.

Charoen Pokphand Foods, a company of the CP group, is a top international producer of pork, shrimp and poultry, and the third largest poultry producer in China. The company was also forced to issue a public statement last June after a video of counterfeit eggs with its Chinese Chia Tai package went viral online.

In September 2012, CP Group was involved in a drug scandal as two of its companies, Shanxi Chia Tai and Xiangfan Chia Tai, used gutter oil in their drug production, according to Emergency Safety Net. Gutter oil is cooking oil that has been recycled from restaurant fryers, grease traps, sewers, and other sources.

To assure customers that their products are healthy, the CP Group went so far as to deploy a group of “robot nannies” in their chicken farm near Beijing to conduct daily checkups for its 3 million hens.

Food safety in China has been a growing concern as incidents have constantly emerged.

The same day of the protest, 120 kids in three kindergartens in Nanchang of southeastern Jiangxi Province fell sick from suspected food poisoning. The children were admitted to Jiangxi Provincial Children’s Hospital after showing symptoms of vomiting, dizziness, and complaints about abdominal pains. Thirty six were hospitalized, 62 placed under medical observation, and 22 were discharged, according to the Jiangxi News.

Fast food chains including Starbucks, Burger King and McDonald’s apologized to Chinese consumers in July 2014, after it turned out that the meat they sourced from a Shanghai company had expired.

The biggest food scandal in China in recent memory occurred in 2008, when melamine-tainted milk powder killed at least 6 babies and sickened 300,000.