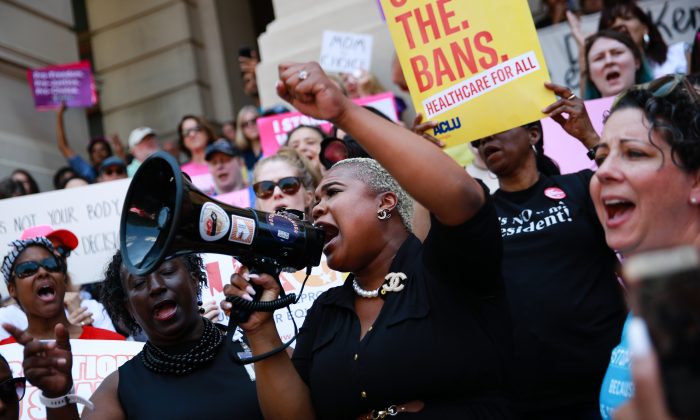 Man Denies Telling Lawmaker to ‘Go Back Where You Came From’

A man strongly denied accusations he told a Democratic lawmaker to “go back where you came from” during a confrontation at a July 20 press conference—just a day after the two had clashed at a supermarket express checkout lane.

Erica Thomas, (D-Austell) who is African American, first made the claims in a tearful video on July 19, when she claimed a white man had come up to her and made the comment because she had more than 10 items in the express lane.

But on July 21, Thomas attempted to walk back her accusation of racism, telling reporters “He said, ‘go back,’ you know, those types of words. I don’t wanna say he said ‘go back to your country,’ or ‘go back to where you came from,’ but he was making those types of references, is what I remember.”

The man at the center of the allegations, Eric Sparkes, acknowledged he name-called Thomas, but during a second-chance confrontation with the lawmaker, who was in the middle of an interview about the incident, denied ever making the alleged racially charged comment.

“Did I tell you to go back where you came from?” Sparkes asked Thomas during the confrontation in front of reporters. “Did I say that? Did I say it? Is it on video? I know what I said.”

Sparkes also told reporters that he isn’t “white,” as Thomas had claimed, and is of Cuban descent. Sparkes is also a Democrat himself and said that the lawmaker’s racist accusations were politically motivated.

“I’m a Democrat. I will vote Democrat the rest of my life, okay? So to call me what she wants to believe for her political purposes to make it black, white, brown, or whatever is so untrue,” he told reporters.

Sparkes, as recently as July 14, had posted a derogatory comment against President Donald Trump on Facebook and expressed support for the four congresswomen whom Trump had told to “go back,” according to 11 Alive.

In a series of Twitter posts last weekend, Trump accused the congresswomen of anti-Semitic and anti-American behavior and told them to “go back” to their countries to help fix the “totally broken and crime-infested places” before returning to the United States to “show us how it is done.”

The four congresswomen are Reps. Alexandria Ocasio-Cortez (D-N.Y.), Ilhan Omar (D-Minn.), Rashia Tlaib (D-Mich.), and Ayanna Pressley (D-Mass.). Apart from Omar, who was born in Somalia, the other three lawmakers were born in the United States.

The initial claims by Thomas were spread widely across social media, with the media painting it as a racist episode.

The case draws parallels to when “Empire” actor Jussie Smollett staged a hate crime, claiming that he had been racially attacked by supporters of the president. Chicago police Superintendent Eddie Johnson said at a press conference that Smollett had staged the hoax because he was unhappy with his salary.

It also drew similarities to the news cycle when media rushed to paint Covington Catholic High School student Nick Sandmann, a Trump supporter, as a racist and instigator of a confrontation with Native American activist Nathan Phillips. Sandmann’s lawyers have sued several news organizations for defamation.

There have been numerous, high-profile incidents of hate-crime hoaxes in the Trump era that have later been exposed to be false.