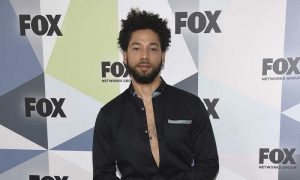 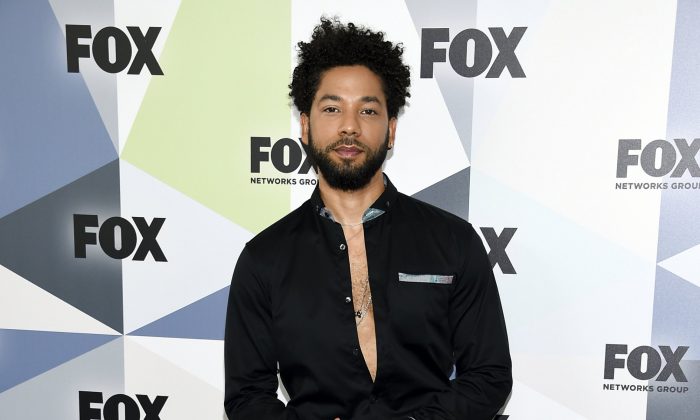 “Empire” actor Jussie Smollett staged a hate crime because he wasn’t satisfied with his salary on the show, Chicago police Superintendent Eddie Johnson said at a press conference on Feb. 21.

“This stunt was orchestrated by Smollett because he was dissatisfied with his salary,” he told reporters.

Johnson said that he was personally upset about what Smollett allegedly did in filing a false police report.

“This announcement recognizes that ‘Empire’ actor Jussie Smollett took advantage of the pain and anger of racism to promote his career,” Johnson said. “I’m left hanging my head and asking why.”

“Bogus police reports cause real harm. They do harm to every legitimate victim,” Johnson added. “I’m offended by what’s happened and I’m also angry. This publicity stunt is a scar that Chicago didn’t earn and certainly didn’t deserve.”

Johnson also noted that a slew of people seized on the initial news of the attack, relying solely on Smollett himself, and tried to blame it on President Donald Trump and Trump supporters.

“Celebrities, news commentators, and even presidential candidates weighed in on something that was choreographed by an actor,” he said. Many of those who reacted initially have declined to respond to the update, while others have said it didn’t matter that Smollett appeared to make up claims of an attack.

Smollett originally claimed he was attacked in Chicago around 2 a.m. on Jan. 29, in freezing temperatures by two white men who shouted slurs at him and said “this is MAGA country,” an apparent reference to Trump’s slogan “Make American Great Again.”

Two Nigerian-American brothers who were extras on “Empire,” Abel and Ola Osundairo, were arrested on suspicion of attacking Smollett but were released after reportedly telling the police that Smollett orchestrated the attack and paid them $3,500.

They were promised an additional $500 upon their return to the United States, sources told CBS Chicago. The sources said one of the brothers held a rope and poured bleach on Smollett while the other wore a plain red hat and yelled slurs at Smollett.

Smollett allegedly rehearsed the attack with the brothers several days before Jan. 29 and gave the brothers money to buy the rope, ski masks, and other gear. Surveillance footage obtained by CBS showed the brothers buying the gear.

Felony criminal charges have been approved by @CookCountySAO against Jussie Smollett for Disorderly Conduct / Filing a False Police Report. Detectives will make contact with his legal team to negotiate a reasonable surrender for his arrest. pic.twitter.com/LvBSYE2kVj

Police said the information the brothers gave them “changed the trajectory of the investigation.” On Feb. 20, a spokesman said Smollett was officially a suspect in the investigation for the charge of filing a false police report, a class 4 felony, and that detectives were presenting evidence for the case before a grand jury.

On Thursday morning, Smollett surrendered to officers at 5 a.m., reported Fox. The actor came in quietly and was processed and transferred to the Cook County courthouse ahead of a court appearance later in the day.

A Cook County spokesperson said Smollett was “in our custody and he is being held separately from other detainees, which is typical for high profile detainees.”

Smollett has not given a statement to police since detectives interviewed the Osundairos. The actor’s legal team issued a statement saying: “Like any other citizen, Mr. Smollett enjoys the presumption of innocence.”

“We intend to conduct a thorough investigation and to mount an aggressive defense,” his lawyers added.