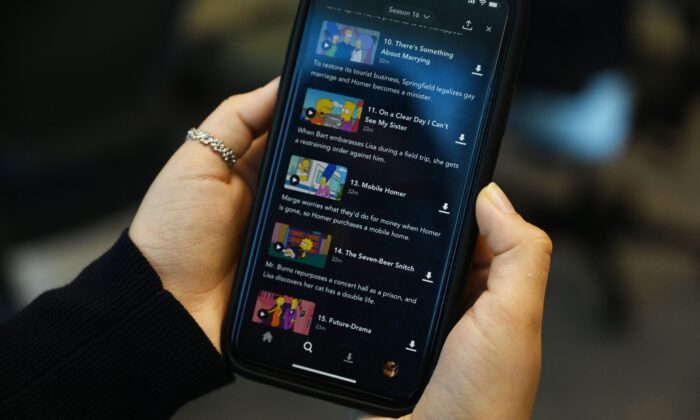 A photo illustration of a mobile phone displaying the Disney+ streaming service in Hong Kong shows a list of episodes of popular U.S. cartoon series "The Simpsons," with episode 12 of season 16 missing from the list, taken on Nov. 29, 2021. (Peter Parks/AFP via Getty Images)
Finance & Business Ties

Republican lawmakers have called out Disney for “cowering” to the Chinese Communist Party (CCP) by omitting an episode of “The Simpsons” that criticizes Beijing from its new streaming service in Hong Kong.

Disney+ released all episodes of the show except for episode 12 of season 16, which refers to the 1989 Tiananmen Square massacre—when the CCP ordered its troops to open fire on protesters who were advocating for democratic reforms, killing potentially hundreds or even thousands of people.

The pulled episode, “Goo Goo Gai Pan,” features the Simpsons’ visit to Tiananmen Square, where they see a joke placard that reads: “On this site, in 1989, nothing happened.” In the episode, the family also visits the embalmed body of former CCP leader Mao Zedong, whom Homer Simpson calls “a little angel that killed 50 million people.”

In a Dec. 10 letter addressed to Bob Chapek, chief executive of Disney, the lawmakers accused the company of apparently “[scrubbing] history on behalf of the Communist tyrants in Beijing.”

“The fact that Disney would delete a satirical cartoon episode that has the potential to expose the evils of the Chinese Communist Party is disgusting and worthy of condemnation,” Rep. Jeff Duncan (R-S.C.), who led the letter, said in a statement.

The missive, co-signed by 13 Republican members of Congress, inquires about the reasons behind omitting the episode, how much influence or control the CCP exerts on Disney’s content, and the stance of the company regarding the Tiananmen Square massacre.

The Disney controversy comes amid escalating concerns about censorship in Hong Kong following Beijing’s draconian national security law, imposed in June 2020, that significantly stifles freedom of speech and freedom of association in the city. The law gives the Chinese regime sweeping power to target individuals for any acts deemed by Beijing as secession, subversion, terrorism, or collusion with foreign forces.

Duncan said Disney’s apparent decision to bend to the CCP—which is committing genocide against Uyghurs and whose human rights violations and crimes against humanity are well-known—erodes American principles. This kind of influence on U.S. companies should be “exposed and reversed,” he said.

The lawmaker also demanded consistency from the company.

“Walt Disney animatedly fought against the rising tides of Communism and fascism, and this action is a betrayal of the founding principles of Disney,” Duncan said.

This isn’t the first instance of Disney being called out for aiding Beijing’s narrative. In 2020, the company came under fire for partly filming the live-action movie “Mulan” in the far west Xinjiang region, where more than 1 million Uyghurs and other Muslim minorities are being detained in internment camps, according to U.N. estimates.

The movie features in its credits a “special thanks” to CCP agencies that are accused of participating in human rights violations against Uyghurs in the region, prompting calls for a boycott of the film.

The Republican lawmakers also asked Disney if the CCP had hinted at shutting down or slowing down operations at the Shanghai Disneyland resort during the review of streaming the Simpsons content in Hong Kong.

According to a 2020 report by PEN America, a New York-based nonprofit group focused on defending free speech, U.S. studios’ investment in theme parks in China serve as a form of business pressure, given that companies would stand to lose billions of dollars if China decided to punish them.

“Disney, for example, has a 47 percent stake in the Shanghai Disneyland Park, which opened in 2016 and which cost over $5.5 billion to build,” the report reads.