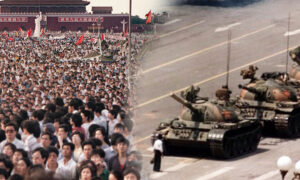 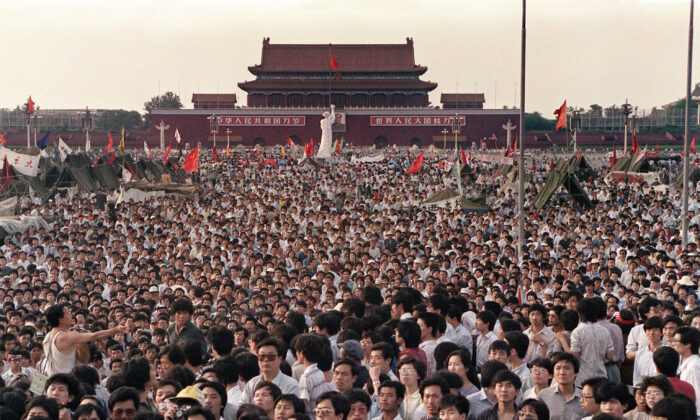 Hundreds of thousands of Chinese gather in Tiananmen Square around a 10-meter replica of the Statue of Liberty (C), called the Goddess of Democracy, on June 2, 1989. (Catherine Henriette/AFP via Getty Images)
China Human Rights

The U.S. State Department and the Congressional-Executive Commission on China have condemned the brutality of the Chinese Communist Party (CCP) on the eve of the 32nd anniversary of the Tiananmen Square massacre.

Secretary of State Antony Blinken said in a statement that Beijing’s Tiananmen Square is now “synonymous with the brutal actions” of the CCP in 1989. On June 4 that year, tens of thousands of Chinese people who wanted to exercise their human rights and fundamental freedoms were silenced by the CCP, he said.

“These individuals had a noble and simple request: Recognize and respect our human rights, which are enshrined in the Universal Declaration of Human Rights. Instead of meeting this request with dignity and open debate, [People’s Republic of China] authorities responded with violence,” Blinken said.

“The United States will continue to stand with the people of China as they demand that their government respect universal human rights. We honor the sacrifices of those killed 32 years ago, and the brave activists who carry on their efforts today in the face of ongoing government repression.”

The CCP has never released a full account of the violence. Days later, the CCP announced a death toll of about 300, most of them soldiers. However, rights groups and witnesses say thousands of people died. Unnamed sources within the CCP say at least 10,000 people were killed, according to a declassified British diplomatic cable and declassified White House documents.

Chair and Co-chair of the bipartisan and bicameral Congressional-Executive Commission on China (CECC), Sen. Jeff Merkley (D-Ore.) and Rep. James McGovern (D-Mass.), spotlighted the Chinese people and their suffering from the CCP military’s crackdown on the day.

“Today we honor the courage and sacrifice of all those who gathered in the streets of Beijing and over 400 other cities during the Spring of 1989 calling for democracy, human rights, and an end to corruption,” they said in a statement. “The violent suppression of these protests crushed peaceful demands for rights and reform and continues to complicate U.S.-China relations to this day.”

“The international community must come together to end the arbitrary detention and torture of prisoners of conscience, end the genocide in Xinjiang, end the repressive efforts to eviscerate Tibetan culture and the religious freedom of hundreds of millions of Chinese citizens, and end the systematic dismantling of freedoms guaranteed to the people of Hong Kong through international treaty.”

“The spirit of Tiananmen is alive in China and everywhere freedom-loving people gather. We remember this tragic anniversary and pledge to work for a future where the legacy of the Tiananmen generation can finally be realized in China and around the world.”

The two lawmakers said that they commit to commemorating June 4 each year “until everyone in China is able to do so freely and without restriction,” acknowledging that the events of June 4 and related commemoration events continue to be censored by the CCP, and “even now in formerly autonomous Hong Kong.”

Authorities in Hong Kong and Macao recently banned a number of events to commemorate June 4, including an annual vigil in Hong Kong’s Victoria Park. Authorities cancelled the event for the second year in a row, citing the CCP (Chinese Communist Party) virus as grounds for doing so. The CCP virus is commonly known as the novel coronavirus.

Hong Kong leader Carrie Lam had on June 1 emphasized that all entities should conform to the CCP’s National Security Law as June 4 approaches. The U.S. State Department recently condemned authorities in Hong Kong for having caused the closure of a museum that commemorates the June 4 Tiananmen Square massacre.