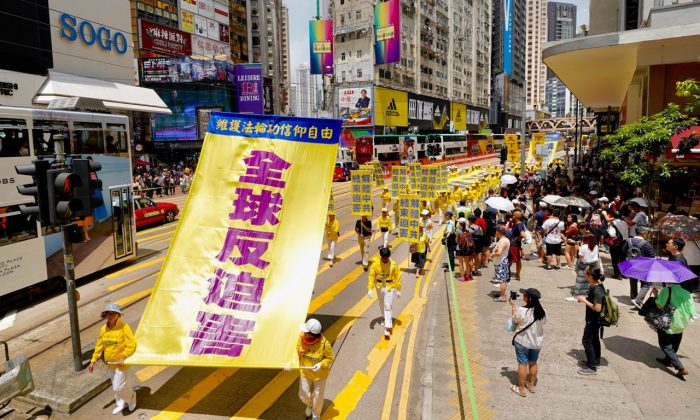 Falun Gong practitioners hold up a banner with the words “Global Opposition to Persecution” in a march in Hong Kong on July 21, 2019. (Li Yi/The Epoch Times)
Hong Kong

Hundreds of Falun Gong practitioners marched through the streets of Hong Kong on July 21 to call for an end to the Chinese Communist Party’s persecution of the spiritual practice in mainland China.

The adherents, most of whom were dressed in yellow T-shirts, marched from King’s Road Playground in the North Point neighborhood to the Liaison Office, Beijing’s representative office in Hong Kong.

Most in attendance were Hong Kong locals, while Falun Gong practitioners from other parts of Asia, including Taiwan, also participated. They held colorful giant banners, with phrases such as “The World Needs Truthfulness, Compassion, and Tolerance,” “Stop the Persecution of Falun Gong,” and “Put Jiang Zemin on Trial.”

Falun Gong, also known as Falun Dafa, is a spiritual practice that involves slow, meditative exercises and a set of moral teachings based on truthfulness, compassion, and tolerance.

Beijing’s persecution began on July 20, 1999, when Jiang Zemin, the leader of the Chinese Communist Party at the time, mobilized the country’s entire security apparatus to locate, arrest, and detain Falun Gong practitioners.

Jiang had viewed the practice’s enormous popularity—by 1999, practitioners numbered from 70 million to 100 million people, according to official estimates cited by Western media outlets at the time—as a threat to the Party’s rule.

Today, Falun Gong practitioners are still arrested and sentenced to prisons, labor camps, and brainwashing centers, where they are subjected to physical and psychological abuses in an attempt to force them to surrender their faith.

While Hong Kong reverted from British to Chinese rule in 1997, the city still safeguards freedom of religion, and people in Hong Kong are free to practice Falun Gong.

Prior to the march on July 21, a rally was held at Edinburgh Place, a public square in the Central district, to raise awareness about the plight of Falun Gong practitioners in mainland China.

Among the speakers was former Hong Kong lawmaker Leung Kwok-hung, who said that the Falun Gong persecution demonstrates that the Chinese regime’s nature is to suppress anyone who expresses dissent against the Party.

“What has happened to Falun Gong practitioners will also likely happen to other people,” Leung said, explaining that as Hongkongers have recently protested against a controversial extradition bill, they are becoming aware of how Beijing views all dissidents as “enemies.”

“More and more Hongkongers will then support and participate in efforts to challenge the Chinese regime’s authoritarianism,” Leung said.

Millions of Hongkongers have protested since mid-June against a legislative proposal that many fear would place people of any nationality at risk of being extradited to China, where an opaque legal system often disregards rule of law and punishes Beijing’s critics.

Leung added that he admired Falun Gong practitioners’ steadfastness in raising awareness over the past 20 years.

Some passers-by stopped to express their support for Falun Gong, including a man identified as Mr. Wong, who said that in recent years, he had seen about eight Falun Gong marches in Hong Kong, all of them peaceful.

Another man, identified as Mr. Chen, 78, said he admires Falun Gong practitioners for their goodness. He added that it’s very important that they can express themselves freely in Hong Kong.

To mark the 20th anniversary of the persecution, marches and rallies have been held in cities around the world, including Washington; New York; Los Angeles; Melbourne, Australia; Taipei; Kyoto, Japan; Seoul, South Korea; Paris; Toronto; and Ottawa, Canada.

In Taipei on July 20, more than 2,000 local Falun Gong practitioners held a candlelight vigil in front of the Taipei City government building to remember those who have lost their lives in the persecution.

According to Minghui.org, a clearinghouse of information about China’s persecution, there are 4,326 confirmed deaths of Falun Gong practitioners as of July 2019. The true number remains unknown, due to the difficulty of getting sensitive information out of China, and is likely much higher.