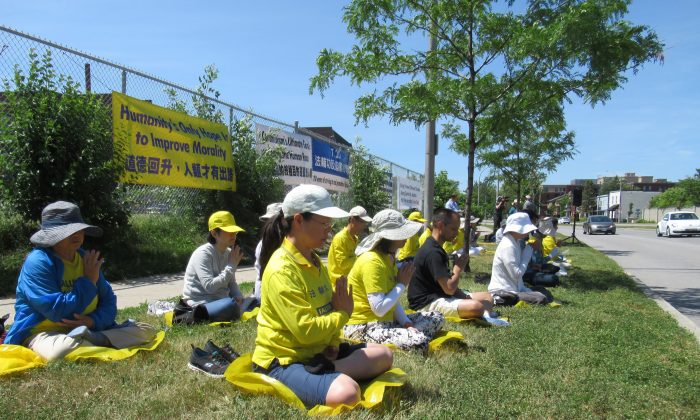 Falun Gong practitioners gather to peacefully demonstrate in front of the Chinese Embassy in Ottawa on July 20, 2019. The event marked 20 years of persecution by the Chinese Communist Party, and speakers urged the Canadian government to call on the regime to end its brutal campaign. (Donna He/The Epoch Times)
Canada

‘An Anniversary That Should Not Be Happening’: Falun Gong Marks Two Decades of Persecution in China

Adherents of the ancient Chinese meditation practice of Falun Gong came together in Ottawa this week to protest 20 years of a violent persecution campaign against their fellow adherents in China.

Gathered in front of the Chinese Embassy on July 18, the yellow-clad practitioners demonstrated their cause by putting up banners and performing the practice’s traditional slow-moving exercises.

Joining them were two prominent Canadian human rights activists: Alex Neve, the Secretary General of Amnesty International Canada, and Rabbi Dr. Reuven Bulka, the leader of Congregation Machzikei Hadas in Ottawa and an author of more than 30 books.

The rally marked the 20th anniversary of the persecution campaign launched against Falun Gong adherents by the Chinese Communist Party on July 20, 1999. A statement issued by the Falun Dafa Association of Canada says the aim of the campaign is to eradicate Falun Gong, a spiritual discipline also called Falun Dafa that espouses the principles of truthfulness, compassion, and tolerance.

“We gather to commemorate 20 years, but we never should have even made it to one year. Because we are marking 20 years of unrelenting, cruel, human rights violations—two decades of the Chinese government persisting with a campaign of vilification, persecution, and violence against Falun Gong practitioners,” he said.

Neve brought up the issue of Sun Qian, a Canadian citizen and Falun Gong practitioner who has been incarcerated in China for over two years. He described Sun’s case as one of “deep concern” due to the fact that “she, like virtually all Falun Gong prisoners, has been subject to torture, cruel treatment, harsh prison conditions, and a wholly unfair legal system.”

He also mentioned Falun Gong prisoners of conscience in China who have close family members in Canada, such as Paul Li and Hongyan Lu, both residents of Toronto.

“I have been here in front of the Embassy in past years with Paul Li, whose father Li Xiaobo is imprisoned, and with Hongyan Lu, whose mother Huixia Chen, also remains imprisoned,” he said.

“I hold Sun Qian, Li Xiaobo, and Huixia Chen close in my heart as we gather here today to mark this sombre anniversary.”

Rabbi Bulka, as the past chair of the Trillium Gift of Life Network, Ontario’s organ and tissue donation agency, talked about the issue of forced organ harvesting in China, where Falun Gong prisoners of conscience are targeted to fuel the country’s multi-billion dollar, state-sanctioned organ harvesting industry. According to several investigations, including by former Canadian MP David Kilgour and human rights lawyer David Matas, the victims are kept alive while the organ is removed so that the organ remains fresh, then die after the removal.

“I’ve been involved now in organ donation for so many years. … Any organization that says, ‘Come to us, and for about $200,000 we’ll give you a new kidney, and then if that new kidney doesn’t work, we’ll have another backup kidney for you in another week’—that’s impossible,” Bulka said, referring to the extraordinary speed with which organs can be procured in China.

“Here in Canada, in Ontario, we’re very well advanced, and if you get a kidney within two or three years, you’re lucky,” he explained. “Anybody who says, ‘I’ll give you another kidney in a week after that if it doesn’t work,’ is totally crazy unless they have a whole army of people that they’re ready to kill in order for those organs to be available.”

“Members of the Falun Gong are being murdered so that others can live. This is a tragedy, and a horror, and an atrocity beyond belief.”

Both men ended their speeches with a message that reflected the purpose of the rally: to spur the Canadian government to publicly call on the Chinese regime to end the Falun Gong persecution campaign.

Neve described the persecution as “20 years of sorrow and suffering.” “But,” he noted, “twenty years, as well, of resilience, determination, and a deep commitment to human rights. Twenty years of coming back here no matter what, to make the simple, compelling and irrefutable demand: End the crackdown. Respect human rights.”

“End this atrocity right now—not tomorrow and not the day after tomorrow, but right now,” Bulka said, while encouraging practitioners to remain strong.

“You have not given up,” he said. “Never give up. You be relentless, you be forceful, you be determined, and you be obstinate and say, ‘These are our people, we represent them, we feel for them, we are fighting for them, and we will fight to the finish to make sure that they become free.”

“My entire Jewish community is behind you 1000 percent,” he added. “We want you to be free.”

In an interview after the event, Neve said that despite escalating tensions between China and Canada in recent months, it’s imperative that Ottawa put human rights at the forefront in its dealings with Beijing.

“We all know that this is a very difficult time in the Canada-China relationship, and there are many factors that Canada is balancing in navigating the strings that now exist between Beijing and Ottawa, but certainly today we reiterate that it’s very important that human rights needs to be at the forefront of everything in the Canada-China relationship,” he said—including trade.

“I think many of us have had concerns for far too many years now that in the relationship, trade too often takes precedence over human rights concerns—it’s uncomfortable or awkward to raise or press human rights issues when the major preoccupation is increasing trade and deepening investment.

“I think it’s absolutely imperative that’s trade-off come to an end, and instead Canada pursue a trade relationship with China that includes human rights considerations at every single step that would mean that we are using all openings, all opportunities to leverage human rights concerns, including when trade is on the table.”

Bulka said in an interview that it’s regrettable that Bill S240—legislation that seeks to criminalize organ tourism—failed to pass before the parliamentary session ended for summer.

“This is a life and death issue. People are being killed. As we’re speaking, they’re being killed in order to supply organs for people who pay, so every day is a wasted day. Every day, people are dying unnecessarily. So this is—it is an emergency,” he said.

“It’s a shame that [the bill] didn’t get through because I have no doubt that when the law is in place … that there will be less people coming for [organs], less of a demand, and that means less people being killed.”