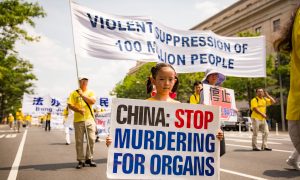 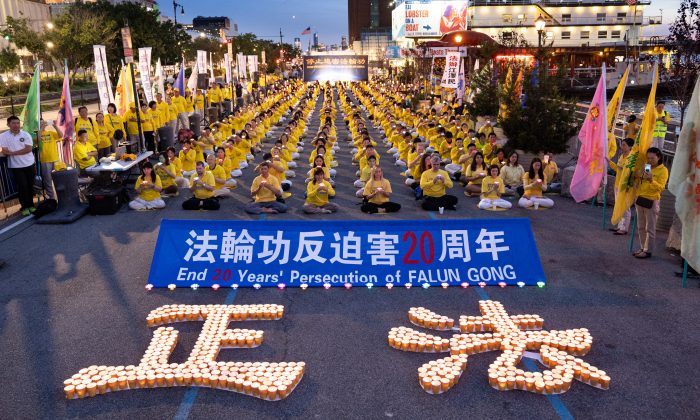 NEW YORK—Hundreds of candles in the shape of lotus flowers illuminated the evening sky in New York as a group of meditators attired in yellow shirts sat silently in front of the Chinese consulate, their round yellow sitting mats neatly aligned in long rows along the riverside.

Around them, colorful flags bearing Chinese characters calling for an end to a brutal persecution in China formed two walls. White characters popped out of a large blue banner at the front reading, “End 20 Years of Persecution of Falun Gong.” Slow music rose, accentuating their story with lyrics of both sorrow and hope.

An ancient meditation practice, Falun Gong was first introduced to the public in 1992. Its moral teachings and health benefits gained wide appeal among the Chinese public with a following of around 70 million to 100 million by 1999. Deeming the practice’s popularity a threat to its control, the atheist communist regime launched a brutal campaign against the group in 1999, rounding up practitioners in brainwashing centers, prisons, labor camps, and psychiatric hospitals, where they were tortured and forced to renounce their faith.

“In one moment of hatred, [the Chinese regime] turned the entire society against upstanding members of society,” Christine Lin, the creative director at Friends of Falun Gong, said at the rally.

“In China, if a demographic you belong to is targeted by the CCP (Chinese Communist Party), it can ruin everything for you. Social control, high-tech surveillance, and rule by terror combine to form the stifling reality of living in China.”

For adhering to his beliefs, 47-year-old Hu Zhiming, a former China air force officer from Beijing, was stripped of his rank and spent eight out of the next ten years in incarceration.

For the two years between 2002 and 2004, a large chunk of Hu’s time was spent in a 32-square-foot cell in Tilanqiao Prison in Shanghai, where two other inmates watched him day and night, and often beat or insulted him. He was made to sit on a low plastic stool that he described as around “the size of his palm” and not allowed even slight movement. He was also deprived of sleep.

“Once I closed my eyes, the guys monitoring us would pry my eyes open with their hands,” Hu told The Epoch Times.

At other times, the guards made Hu and the other prisoners package soap bars from the popular Shanghai-based brand Bee & Flower. He said that he has since seen the same soap bar for sale in a local grocery store in New York.

Hu was released in 2004, but for distributing some CDs explaining about the persecution, he was again sent to a prison in Liaoning the following year. He started a hunger strike in protest of the detention. The guards used all kinds of methods to make his life miserable so that he would give up the effort: he was tied to a bed and force-fed solutions with a tube through his nose; they flashed ultraviolet lights on him that burnt his skin and caused eye damage; the guards also sent him to the contagious patient room with threats to get him infected.

Hu’s health deteriorated rapidly and he soon had trouble even lying in bed. His body became so scrawny that one could wrap around his waist with both hands. Thinking that he would likely die, the nurse at the prison hospital nurse was told to stir him every two hours to check if he was still alive.

He narrowly survived through his prison term and got out a little more than a skeletal image in September 2009. But he witnessed two other practitioners die of an unknown drug injection and beating.

During the lunar Chinese New Year in 2010, Hu escaped his police surveillance and made his way to the China border. There, a tour guide helped take him to Thailand where he filed his asylum claim to the United Nations. In 2012, he was granted asylum by the United States.

At a rally earlier, several practitioners stood in a row holding hand-made placards to highlight the persecution happening to their family in China.

Liaoning practitioner Xiao Yanbing said that her husband, 61-year-old Yu Chunsheng, has been detained by the Chinese regime since June 19. According to Xiao, Yu was arrested while on a southward train traveling from Shenyang and has since been transferred to a local detention center. No further information has been heard of him and his family was denied visits.

Yu had been a professor at the Shenyang Ligong University for decades and was heading the department of mechanical engineering before the school’s Party committee dismissed him for his belief. He had previously been detained twice and had met with constant harassment over the years.

“For believing in truthfulness, compassion, and forbearance and for striving to be a good person, an outstanding citizen like my husband could still be deprived of personal freedom and faced with even more ruthless persecution. This is not just a tragedy for my family alone—it’s a social tragedy,” Xiao said at the rally.

Xiao spoke of the torment thinking what torture might befall the man she has been married to for 35 years. “My son has not seen his dad for 11 years since he came overseas,” Xiao told The Epoch Times. “I had to force myself to not think along whenever I came across photos of torture … the mere sight of them gave a sharp pain to my heart.”

Instead of dwelling on their emotions, the practitioners with loved ones detained in China said they have been trying to counter the persecution in peaceful ways, making calls to CCP officials or talking to Chinese tourists to give them insights not available in a heavily policed environment like China.

“I felt sad for those who persecute Falun Gong practitioners … A lot of them had no idea what really happened,” Xiao said. “They were not that evil by nature.”

Xiao added that her son has been calling and writing to the prison to bring them outside information so that they might stop committing sins against the innocent.

“However the Chinese Communist Party tried to stifle the internet and regulate the press, they never manage to block out the true facts. This is not an excuse to do evil,” Zhang said, while calling for the release of his mother, 65-year-old Zhang Aili.

“Falun Gong practitioners are not only defending their own rights of belief—they are also fighting for the basic rights and freedom for other groups languishing under the regime’s brutality and for Chinese people as a whole,” event organizer Yi Rong said. She noted that over 337 million people have joined a grassroots movement to quit the CCP and its affiliations, many using a pseudonym.

“Probably 20 years ago, no one would have thought that Falun Gong could persist until today … It is a testament that coercion and power cannot conquer belief,” U.S.-based political commentator Li Tianxiao said at the rally.

“Many of the people in the audience today have survived the worst of the persecution. Others have not personally experienced those horrors, but have shown up at events like these every year,” Lin said. “They have all been persistent in their advocacy. This is the way to resist an evil regime—fighting lies with truth has proven to be incredibly impactful.

“Even as ordinary citizens, we have tremendous power.”