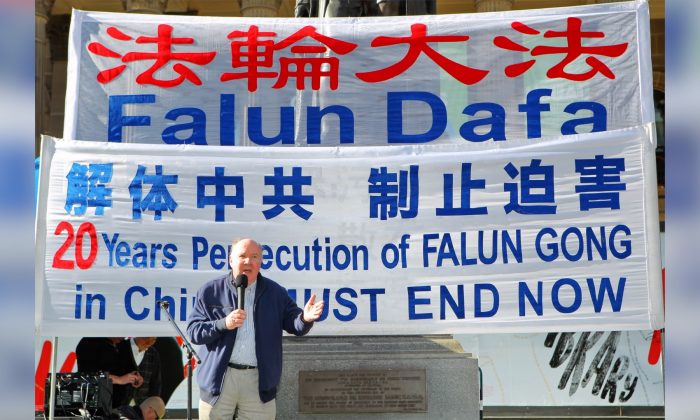 MELBOURNE, Australia—Practitioners of spiritual practice Falun Dafa marched through the streets of Melbourne city on July 20 to remember the victims of persecution—a persecution launched by the Chinese communist regime 20 years ago.

The date—July 20, 1999—marked the day when former Chinese leader, Jiang Zemin, issued a ban on the spiritual practice known as Falun Dafa, also called Falun Gong. Falun Dafa, is an ancient Chinese meditation practice that includes a set of teachings based on the principles of truth, compassion, and forbearance.

Since the regime banned the practice, Falun Dafa practitioners have been appealing to various levels of governments, both inside and outside of China to end the suppression that has resulted in waves of practitioners imprisoned, tortured, and even killed for their faith. At any given time, 450,000 to 1 million adherents are incarcerated, according to estimates by the Falun Dafa Information Center.

Led by the Celestial Marching Band, practitioners, braving the Melbourne winter, marched through the CBD in various costumes, ranging from a waist drum troupe draped in golden attire to ladies dressed in white carrying wreaths commemorating those who lost their lives in China.

Practitioners also carried banners that raised awareness about human rights abuses committed by the communist regime, such as organ harvesting, before reaching the State Library for a rally.

Maria Jose Gonzalez Otharan, an industrial engineer from Argentina, was impressed by the messages of peace and universal values displayed by the march.

She was, however, surprised to learn that the peaceful practice is persecuted in Communist China: “I can’t believe that this time of the world’s age, a government is persecuting these kind of beliefs, because they feel threatened.

“So communism, in my country we don’t practice that, thank God for that. I think it’s something we really need to stop.”

Speaking at the rally, Tenzin Khangsar, president of the Tibetan community in Victoria, said that under the Chinese communist regime, Falun Gong practitioners have been suffering a brutal crackdown—similar to the Tibetans.

“Falun Dafa practitioners are [not allowed] to practice and unfortunately, many of them been arrested, and, they illegally, [harvest] their organs.”

Khangsar said that his community stands with Falun Gong practitioners in their efforts to stop the persecution, and believes that the Chinese regime will fall one day soon.

“These people are very innocent and are practising the very, the true and genuine culture of China. And they’re practising the foundation of humanity, which is love, compassion, and kindness,” Khangsar told The Epoch Times in an interview before the rally.

“Unfortunately, the Chinese Communist regime, sees this as a threat and then start killing the innocent Chinese people, so that’s why me and my Tibetan people are here, to show solidarity and support your cause.”

“The day will come that the darkness in China will gradually enlighten and this communist regime will collapse, sooner or later.”

An independent people’s tribunal into the practice of forced organ harvesting, chaired by Sir Geoffrey Nice QC, recently concluded that prisoners of conscience—mainly Falun Dafa practitioners—have been, and continue to be killed in China for their organs, and “on a significant scale.”

“The conclusion shows that very many people have died indescribably hideous deaths for no reason, [and] that more may suffer in similar ways,” Nice said in delivering the tribunal’s judgement on June 17.

Detailed reports of the grisly practice first emerged in 2006. Since then several investigations examining a range of evidence, including extraordinarily short wait times for organ transplants at Chinese hospitals, and accounts from former prisoners of conscience who consistently spoke of being routinely blood tested while incarcerated, painted a more detailed picture of widespread abuse.

A in-depth 2016 report into organ harvesting, examining the public records of 712 Chinese hospitals that carry out liver and kidney transplants, showed that roughly 60,000 to 100,000 transplants were being conducted each year in China— far outstripping the officially reported number of 10,000 to 20,000 per year.

Peter Westmore, former president of the National Civic Council, was shocked when the issue of force organ harvesting was brought to his attention more than a decade ago.

“When a couple of Falun Gong practitioners came to see me 15 years ago, and said that this was happening in China, I simply would have to say I did not believe it,” he said at the rally.

“I did a Google search, and I put in just two words: China, and transplants.”

Immediately, Westmore noticed that there was “page after page of advertisements from hospitals in China, in the English language, inviting people to go to China to have organ transplants done in China.

“Those advertisements, among other things, also said that if the transplant failed, that the Chinese hospital would provide new organs within a couple of weeks.

Having relatives who are medical practitioners in Australia, Westmore said: “I know that in Australia, it takes years for organs to be found, suitable matched, between a donor and recipient. In China, hospitals were offering organs if the first transplant failed within a matter of weeks.

Gerard Flood, treasurer of the Democratic Labor Party, called the tribunal into forced organ harvesting the “greatest development in human rights in the 21st century.”

“This tribunal’s conclusions are the highest profile statement on these allegations since they emerged 13 years ago.”

Andrew Bush, former senior member of the Liberal Party and current vice president of Better Hearing Australia, compared the number of Falun Gong practitioners killed during the persecution to the population of an Australian state.

Ruan (Frank) Jie, editor of the Tiananmen Times and chairman of the Chinese Democratic Party Australia, said Western governments could do more to stand up for human rights in China.

Ruan added that a recent meeting between U.S. President Donald Trump and a Falun Gong practitioner, along with other survivors of religious persecution, highlighted the seriousness of the human rights violations in China.

During the meeting Trump said “Each of you has suffered tremendously for your faith.

“Each of you has now become a witness to the importance of advancing religious liberty all around the world.”

Bon Nguyen, president of the Australian Vietnamese Community warned that if Australia does not speak up for human rights, one day, the same thing may happen in our neighbouring countries, “and potentially to us in Australia as well.”

“The influence of China in Australian politics today is far, far greater.”

“The communist regime’s persecution of Falun Gong in China is the repression of universal values shared by humankind.

“The darkest days of this persecution by the Jiang Zemin clique in China will soon be over and Jiang will be brought to justice. Falun Gong practitioners are doing their utmost to make it happen.”