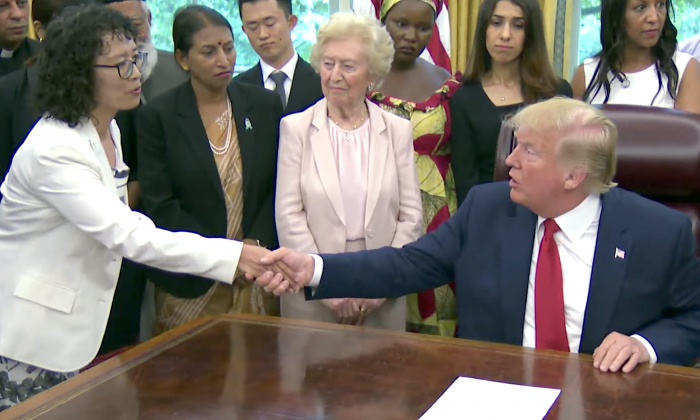 WASHINGTON—A practitioner of the spiritual discipline Falun Gong who was persecuted in China for her faith was among 27 survivors of religious persecution who met with President Donald Trump at the White House on July 17.

Yuhua Zhang, 59, was repeatedly imprisoned and suffered torture in China for a combined period of 7 1/2 years for refusing to renounce her faith before escaping to the United States in 2015.

Trump met with Zhang, as well as other survivors from 17 countries, including China, North Korea, Iran, Pakistan, and Burma, to reaffirm his administration’s commitment to religious freedom, the White House said.

Zhang’s attendance at the event marked the first time a Falun Gong practitioner has met with the nation’s highest officeholder in an official engagement.

While gathered around Trump’s desk in the Oval Office, Zhang told the president that her husband, also a Falun Gong practitioner, is imprisoned in Suzhou Prison in Jiangsu Province, China.

Zhang also told Trump about another practitioner imprisoned at the same facility who died one day after being released. Before the person died, he vomited a large amount of blood, she said.

“Each of you has suffered tremendously for your faith,” Trump said during the meeting. “Each of you has now become a witness to the importance of advancing religious liberty all around the world.”

The survivors were in Washington to participate in the Ministerial to Advance Religious Freedom hosted by the U.S. State Department. The three-day conference, held July 16-18, is the largest religious freedom event in the world.

U.S. Ambassador-at-Large for International Religious Freedom Sam Brownback said at the event that the administration will announce “additional measures” on religious freedom efforts at the conference on July 18, which will be covered in speeches by Secretary of State Mike Pompeo and Vice President Mike Pence.

Zhang, a former professor at Nanjing Normal University, said in a speech at the conference on July 17 that she was severely tortured while detained in China. That included enduring electric shocks, sleep deprivation, forced injections of unknown drugs, and being forced to run for hours under the baking sun.

Zhang’s husband, Zhengyu Ma, an engineer, is currently serving a three-year term in Suzhou Prison, Jiangsu Province, for sending letters to the regime’s top leaders calling on them to end the persecution. She hasn’t heard any news about him since his sentencing in 2017.

“I worry day and night about my husband,” Zhang said at the conference. “He could be tortured to death like thousands of other Falun Gong practitioners have been.

“He could be killed for his organs like an unknown number of Falun Gong practitioners have been.”

Zhang was referring to longstanding allegations, based on evidence from a variety of sources, that the Chinese regime has been killing imprisoned Falun Gong practitioners to use their organs for transplant. These allegations were confirmed by independent researchers in a report issued in 2006, followed by further reports that confirmed with more detail a picture of widespread abuse.

Last month, an independent tribunal, after a one-year investigation, confirmed the allegations, finding that forced organ harvesting has taken place in China for years “on a significant scale,” and is still taking place. The judgment added that Falun Gong practitioners were likely the main source of such organs.

Zhang, who has tirelessly advocated for her husband’s release since arriving in the United States, called on the U.S. government to impose sanctions under the Global Magnitsky Act on Chinese officials “known to have illegally detained, tortured, and killed Falun Gong practitioners.”

Many of the perpetrators continue to work in China and have been promoted for their efforts in persecuting practitioners, Zhang said.

“I hope that the U.S. government, international media, and human rights groups can help free my husband and the hundreds of thousands of other innocent but jailed Falun Gong practitioners,” she said.