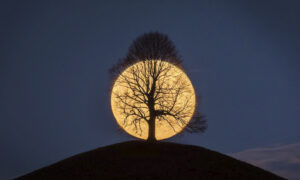 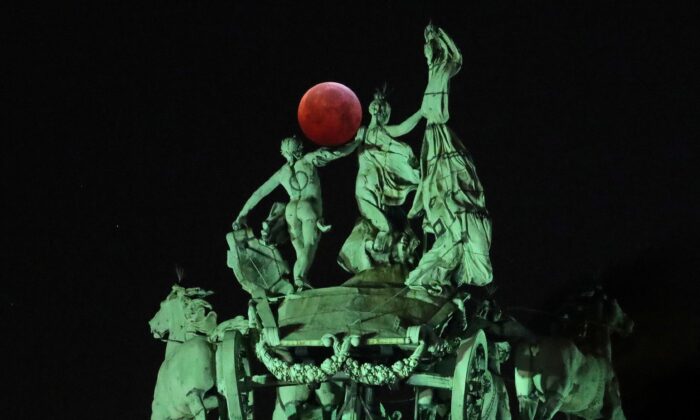 The moon is seen beside a quadriga on the top of the Cinquantenaire arch during a total lunar eclipse, known as the "Super Blood Wolf Moon," in Brussels on Jan. 21, 2019. (Yves Herman/Reuters)
Space

How to Watch the Upcoming ‘Super Flower Blood Moon’ Eclipse

The full moon on Wednesday will be the year’s biggest “supermoon” and feature the first total lunar eclipse in more than two years.

During the eclipse, the full moon will pass through the Earth’s shadow. It appears red, known as a “blood moon,” as light is scattered through the Earth’s atmosphere, much like during sunset. In addition, the moon will be at perigee, or the closest point to Earth in its orbit, making it appear about seven percent larger than normal and 15 percent brighter or a “super moon,” according to astronomers. May’s full moon is known as the “Flower Moon” since it occurs when spring flowers are in bloom.

The result when taken together is a “Super Flower Blood Moon.”

The eclipse will happen in the early morning hours on Wednesday in western North America, with people in Alaska and Hawaii getting the best views. It can also be seen in southern Chile and Argentina. Skygazers in all of Australia and New Zealand and parts of Southeast Asia can see the eclipse on Wednesday evening.

For stargazers in parts of the world where the event is not visible or obscured by clouds, some observatories will webcast the eclipse.

The Griffith Observatory in Los Angeles will stream live views beginning at 1:45 a.m. PT. The Lowell Observatory in Flagstaff, Arizona, will start its broadcast at 2:30 a.m. PT. The Astronomical Society of South Australia will also broadcast live on Facebook and YouTube starting at 7 p.m. ACST.