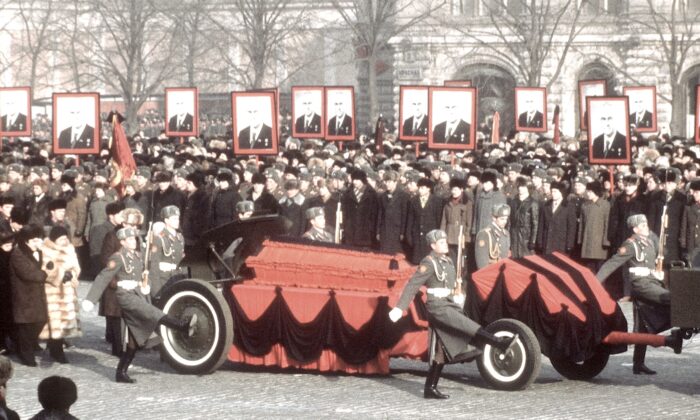 The coffin containing the remains of Yuri Andropov, former KGB chief and Soviet premier, is pulled through Moscow streets during his funeral on Feb. 13, 1984. Andropov called the Soviets’ strategy of ideological subversion in the West “the final struggle for the minds and hearts of the people.” (AFP via Getty Images)
By Michael Wing

The defection of Russian intelligence officer Igor Gouzenko, stationed at the Soviet Embassy in Ottawa during and after the Second World War, is one of the highest-profile cases of defection in Canadian history—even said to be the event that triggered the Cold War.

Gouzenko exposed the extent of the Soviet spy network in the West at that time, including dictator Joseph Stalin’s efforts to steal nuclear secrets and the technique of infiltrating sleeper agents into target countries.

But some of the most chilling revelations came from another spy who defected to Canada 25 years later, exposing how the Soviet Union set about creating chaos and discord in the West—the fallout from which continues to be felt today.

Bezmenov managed to escape from his post as an informant for the notorious Soviet spy agency and was given a secret identity by the CIA and a new name: Tomas David Schuman. He worked in several professions until finally becoming a CBC Russian-language television correspondent in Montreal, broadcasting to the Soviet Union as part of the CBC’s International Service.

He left that position in 1976, later claiming that the Soviets urged then-prime minister Pierre Trudeau to pressure the CBC to remove him from his position.

In the 1980s, Bezmenov became known for his anti-communist interviews, lectures, and books. His most famous book is “Love Letter to America,” a country he described as “the most free, affluent, and just in today’s world,” and as such a prime target of the Soviet “war of communist world aggression.”

He said the driving force behind the communist war of aggression was “ideological subversion—the process of changing the perception of reality in the minds of millions of people all over the world,” and what former KGB head Yuri Andropov called “the final struggle for the minds and hearts of the people.”

Bezmenov expounded on this in a 1984 interview with American author and documentary film producer G. Edward Griffin, saying the KGB actually only devoted about 15 percent of its resources to intelligence-gathering.

“The other 85 percent is a slow process which we call either ‘ideological subversion’ or ‘active measures’—in the language of the KGB—or ‘psychological warfare,’” he said.

“What it basically means is to change the perception of reality of every American to such an extent that, despite the abundance of information, no one is able to come to sensible conclusions in the interests of defending themselves, their families, their community, and their country.”

This is a “great brainwashing process” designed as a long-term four-fold strategy that is “overt and open—you can see it with your own eyes,” explained Bezmenov. The four stages are demoralization, destabilization, crisis, and finally, normalization.

Essentially propaganda education, demoralization takes 15 to 20 years—the span it takes to educate one generation by exposing them to “the ideology of the enemy,” Bezmenov said.

“Marxist-Leninist ideology has been pumped into the soft heads of at least three generations of American students, without being challenged or counter-balanced by the basic values of Americanism (patriotism).”

Most people in the United States who graduated in the 1960s now occupying positions of power in the government, civil service, business, mass media, and the educational system are already demoralized, the ex-spy said. They are “programmed to think and react to certain stimuli in a certain pattern,” and the process is “complete and irreversible.”

“You cannot change their mind,” he said.

“Exposure to true information does not matter anymore. A person who is demoralized is unable to assess true information. … Even if I shower him with information, with authentic proof, with documents, with pictures; even if I take him by force to the Soviet Union and show him a concentration camp, he will refuse to believe it.”

He noted that if one started educating a new generation today, it would take another 15 to 20 years to “turn the tide of ideological perception of reality back to normalcy and patriotism.”

Bezmenov explained that ideals such as social justice and equality no longer serve any purpose in the second stage. The focus shifts to destabilizing sectors such as the economy, law enforcement, foreign relations, media, and defence systems.

“It takes only two to five years to destabilize a nation,” he said.

The process involves radicalizing human relations to the point where people are unable to resolve issues in a civil way, fracturing traditional relations into groups: labour unions, women’s rights, racial tension, and so on. “As long as these groups come into antagonistic clash … that is destabilization.”

He said the process of destabilization in the United States had progressed surprisingly fast in the 14 years since he had defected.

In the third stage, Bezmenov said that after society is destabilized, it collapses into chaos, and inevitably the people will call for the government to step in to enforce stability.

“Either a foreign nation comes in, or the local group of leftists, Marxists … a saviour comes and says, ‘I will lead you,’” he said.

Crisis typically takes one of two forms: either civil war, an example being the PLO insurgency in Lebanon that began in 1968, or invasion, such as the Soviet invasion of Afghanistan in 1979.

Lastly, the subverting country finally seizes control of the target country with forceful military overthrow; the chaos is stabilized, and the situation “normalized.”

Use of the term “normalized” in this way is ironic, Bezmenov said.

“When the Soviet tanks moved into Czechoslovakia in ’68, comrade [Leonid] Brezhnev said, ‘Now the situation is normalized.’ This is what will happen in the United States if you allow all these schmucks to bring the country to crisis,” he said.

“[There will be a promise of] all kinds of goodies and paradise on earth to destabilize your economy, to eliminate the principle of free-market competition, and to put a big brother government in Washington, D.C., with benevolent dictators who’ll promise lots of things. Never mind if the promises are fulfilled or not.”

In “Love Letter to America,” Bezmenov said the U.S. media “is a willing recipient of Soviet subversion,” the aim being to tear down traditional Western society and its values.

“I know this because I worked with American journalists and correspondents in Moscow while on the Soviet side, and after my defection to the West,” he said, noting that the media landscape in the United States is “monopolized both financially and ideologically by what are referred to as ‘liberals.’”

Promoting “non-issues” is one tactic, he said.

“An issue, the solution of which creates more and bigger problems for the majority of a nation even though it may benefit only a few, is a non-issue. The main purpose of non-issues and the devastating result of their introduction is the side-tracking of public opinion, energy (both mental and physical), money, and time from the constructive solutions,” he said.

“Soviet propaganda elevated the art of infiltrating and emphasizing non-issues in American public life to the level of actual state policy.”

Another method Soviet subversion in American media and “one of the most devastating,” he said, was the discrediting of those who had evidence of communist crimes against humankind.

“In my own experience, communist defectors who have requested and sometimes literally begged to have stories of their life in the Soviet Union told to the American people via the major American media have been completely ignored.”

Michael Wing
Editor and Writer
Michael Wing is a writer and editor based in Calgary, Canada, where he was born and educated in the arts. He writes mainly on culture, human interest, and trending news.